Time for a New Confessing Church

For the last three years I’ve moderated the Veritas Forum at my University. And each time we’ve had 500 to 700 university students come to these sessions and the recent event was no different. I’ve thoroughly enjoyed these sessions, which give our students ample time to ask questions and to experience informed and responsible interlocutors that include Christians, agnostics and atheists.

The year’s Veritas theme was “In _____ we trust.” It’s a great question in these troubling times. We had a passionate and polite debate between two political scientists, one an evangelical believer and the other an atheist. At one point, a student asked our panel, “Considering Romans 13: 1-2, ‘Let every person be subject to the governing authorities; for there is no authority except from God, and those authorities that exist have been instituted by God. Therefore whoever resists authority resists what God has appointed, and those who resist will incur judgment.’ How do think of the new president, Donald Trump, expresses God’s will and should we be subject to him?” One of our presenters, for whom I have much respect, replied, “Yes, we are all called to respect the office of the presidency, but that does not mean we don’t stand up against actions that betray our constitution or hurt others in general.”

In the ensuing discussion I offered my own take on this question, mostly based on my thinking from my Reformed tradition. I argued that I don’t think St. Paul meant that all governments embody or express God’s will on earth; there are many times that Paul challenges the political and governmental status quo, and governments that savage their citizens, like Maoist China or Stalin’s Soviet Union, in no way embody God’s will.

And I think these issues are now more relevant than ever. In the Reformed tradition, there is a strong history of resisting unjust authorities. The Reformed tradition was critical in helping to create the Scottish, English and American Revolutions—acting against what were thought to be oppressive and unjust regimes.

This same tradition of Reformed resistance to corrupt governments is exemplified by the 1934 Barmen Declaration, which came out in reaction the to the German Protestant churches, which had endorsed 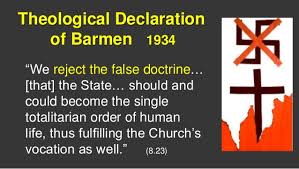 the Nazi Party in 1933. The Barmen Declaration was written by the great Reformed theologian, Karl Barth and signed by Dietrich Bonhoeffer, the Lutheran pastor who eventually was murdered by the Nazi regime. They led the Confessing Church, an outlawed organization but one of the few Christian groups to maintain their honor and loyalty to Christ in the midst of the terror of the Nazi regime.

In a recent editorial, Stanley Hauerwas, the well-known Christian ethicist, responded to Trump’s claim in his inaugural address that, “At the bedrock of our politics will be a total allegiance to the United States of America and through our loyalty to our country we will recover loyalty to each other.” Hauerwas argues that Trump’s demand of loyalty to the state makes an idol of the nation and undercuts Christian discipleship.

The Reformed Tradition challenges Christians and citizens of the country to avoid total allegiance to any power except the Lord Jesus Christ. All of this sent me back to my own Reformed tradition and I reread the Confession of 67. This is a part of the Presbyterian Church U.S.A., and far from being a dusty old piece, it ripples with the passion of following Christ into our public life.

I quote the Confession in part:

“God’s reconciliation in Jesus Christ is the ground of the peace, justice, and freedom among nations which all powers of government are called to serve and defend. The church, in its own life, is called to practice the forgiveness of enemies and to commend to the nations as practical politics the search for cooperation and peace. This search requires that the nations pursue fresh and responsible relations across every line of conflict, even at risk to national security, to reduce areas of strife and to broaden international understanding. Reconciliation among nations becomes peculiarly urgent as countries develop nuclear, chemical, and biological weapons, diverting human power and resources from constructive uses and risking the annihilation of humankind. Although nations may serve God’s purposes in history, the church which identifies the sovereignty of any one nation or any one way of life with the cause of God denies the Lordship of Christ and betrays its calling.”

For me this calls Christians and responsible citizens to three 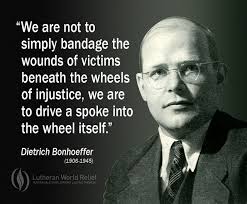 The Lordship of Jesus Christ is not for the sake of one’s own tribe or nation, but indeed a calling to care for the widow, orphan, stranger, refugee and alien in the land; those who are oppressed and hungry, extending the peace and reconciliation to all peoples on the earth. Under Trump it seems all hell may break loose, and violence may become the chief instrument of our nation’s strategy. I have no doubt that this will be a scary time in our history, but we must remain vigilant about our faith in Christ. Our true exceptionalism is whether or not we show the courage to die for this universal purpose, the freedom and salvation of all people. Our ultimate loyalty is always to Christ and to his kingdom and not to human authority or national pride.

We must be clear in all these matters, otherwise, our shame will go down in history. So yes, is it time for a new Confessing Church, one whose loyalty is to Christ alone.