When Anti-Nazi-ism Goes Too Far

Folks, I’ve been wanting to write about the events of the past week, namely, the shooting in El Paso and its aftermath, but, alas, I’ve been neglecting this blog almost as much as I have the weed-choked “flower bed” in the backyard.

We started with a killer and his “manifesto” full of ramblings on immigration as well as environmentalism and what-not, and with the anti-immigrant hatred demonstrated in the act of travelling specifically to that border town in order to target Mexicans.  Accusations swirled:  Trump is not merely prejudiced, but an actual white supremacist, as are, what’s more, anyone who supports immigration enforcement, as well as anyone who supports Trump or, in fact, anyone who does not denounce Trump — and that means not merely rejecting actions of Trump which are racist (as defined/interpreted by the hearer), but utterly and completely denouncing Trump and anyone associated with him in any way.   (To what extent this is further based on racial prejudice of any sort being deemed full-blown “white supremacism” isn’t clear to me, in part because I’ve been trying to avoid articles that make these claims, to avoid metaphorically banging my head against the wall too much.)  And, likewise, not only has the killer been deemed a domestic terrorist but Trump and, well, anyone connected with him, are all one and the same.

Here’ Rich Lowry writing at Politico, who expresses my opinion:

The El Paso massacre, carried out by a white nationalist waging a lunatic war against Hispanic immigration, is being used as a bludgeon against Trump and immigration restriction more broadly.

First, let’s stipulate that Trump’s words on immigration often are crude and inflammatory . . .

That said, nothing he’s ever said could possibly justify indiscriminately shooting people. Trump is not a terrorist, a supporter of terrorism or an enabler or terrorism. To suggest otherwise is a slander born of partisan hatred.

The El Paso shooter’s apparent manifesto overlaps with some of Trump’s rhetoric, but what gives the manifesto its motive force is its apocalyptic argument that slaughter is the way to fight “to reclaim” the country.

The gulf between that view and Trump’s—that we should protect the border by getting Congress to build a wall and change some highly technical asylum rules—is vast. It is the difference between justifying criminality and advocating legislation, between quitting on America and calling for policies to solve one of its problems.

Much is made of Trump’s use of the word “invasion,” which also features in the manifesto. This is a loaded term that should be avoided. It speaks to a hostile intent among immigrants who are, by and large, simply coming here because they think they can improve their lives. Although the numbers and relatively robust organization of the various caravans, and the sheer scale of the current migrant inflow, make the word more apt than for routine immigration.

But, again, the impulse to gun down these supposed invaders in cold blood while they are shopping at Walmart and the impulse to exclude them from entry into the country, or quickly and safely return them home once here, don’t exist in the same moral universe.

For all that the language police profess to care deeply about words, they aren’t very careful about rendering Trump’s. No one notes that in his Florida rally where a rally-goer notoriously yelled “shoot them,” and Trump shook his head and smiled, “only in the Panhandle,” the president was in the midst of saying of border patrol agents, “Don’t forget, we don’t let them, and we can’t let them, use weapons.”

And here’s a twitter exchange tonight, initially with reference to an article about the successful lawsuit against a neo-Nazi group by a woman they had relentlessly harassed:

I actually prefer the modality of hanging them by the neck until dead, or parking them against a brick wall for a firing squad after a Nuremberg style trial, but that's just me https://t.co/M8hjiLki4y

After a bit more back and forth, he replies:

No one ever said "everyone" is a Nazi.

Which Nazis — and be exact — do you want to see remain alive? https://t.co/HeU2a5JIZa

He's a famous defender of Nazis. He likes them alive. I like them dead. https://t.co/RSAAr2vVV9

And, for reference, Rick Wilson, in addition to the twitter “blue check-mark” also has over half a million followers.  He describes himself as “Apostate GOP Media Guy, Dad, Husband, Pilot, Hunter, Writer. #1 NYT best-selling author of Everything Trump Touches Dies.”  I follow him out of the general principle of having at least some representation in my twitter feed from folks with opposing views, though his feed is a bit one-dimensional in its anti-Trumpness.

And he openly supports killing people because of their ideology.  Now, it should go without saying that I don’t endorse Nazi-ism, but there is a difference between opposing the ideology and calling for its supporters to be killed.  Could he imagine that he’s really referring to actual literal Nazis in Nazi Germany?  But even then, only the worst of the worst were given the death penalty at Nuremburg; membership in the Nazi Party was not itself a reason for imprisonment (except for postwar detainment coming from a fear of a guerilla resistance).  And, of course, during the war itself, American/Allied soldiers did not kill Nazis qua Nazis, but insofar as they were members of the German military on the battlefield, and, following the usual approaches, were sent off to POW camps if they surrendered.

Now, what’s going on in Wilson’s head I cannot say.  Is it obvious to him that this is all hyperbole?  Am I insufficiently immersed in his world to know that, of course, he does not for a minute believe any of what he’s saying?  Or has he become so consumed by his anti-Trumpism that he genuinely believes the deaths of all he deems Nazis are warranted and morally acceptable?  And, in any case, is it acceptable to call for the deaths of others even as hyperbole?  These posts got plenty of likes (though they were not, at any rate, massively viral, relative to the way some others become).

It should go without saying that we cannot, in the name of ending hate, continue to stoke hate, merely justifying ourselves that the people we are hating, are deserving of our hatred.

And a third brief observation:

A couple days ago, the Washington Examiner reported on a tweet by Alexandria Ocasio-Cortez:

Here’s what we have to say to all of America’s men and women falling in the grips of hatred and white supremacy:

Come back. It’s not too late.

You have neighbors and loved ones waiting, holding space for you.
And we will love you back. ⬇️ https://t.co/f2nCZzwLUy

And that’s great, but it doesn’t go far enough.  To my understanding, the sort of young men who “sh**post” on 8chan and identify with hate groups land there because they don’t have any other community/family, but received a welcome there.  A promise that’s conditional (“if you forsake white supremacy, your loved ones will love you again”) is hardly going to persuade someone who says, “my family didn’t love me in the first place.”  Any narrative of a young man leaving a hate group inevitably is the story of someone reaching out and befriending that person without conditions, and only when they feel a bond with someone can they begin to consider changing their ways.  Here’s an analogy:  how many times have you seen the Chantix commercials on TV?  Start taking Chantix and then, after a given length of time, quitting smoking becomes more doable.

*Just in case the above tweets become deleted, here are they are again as pictures: 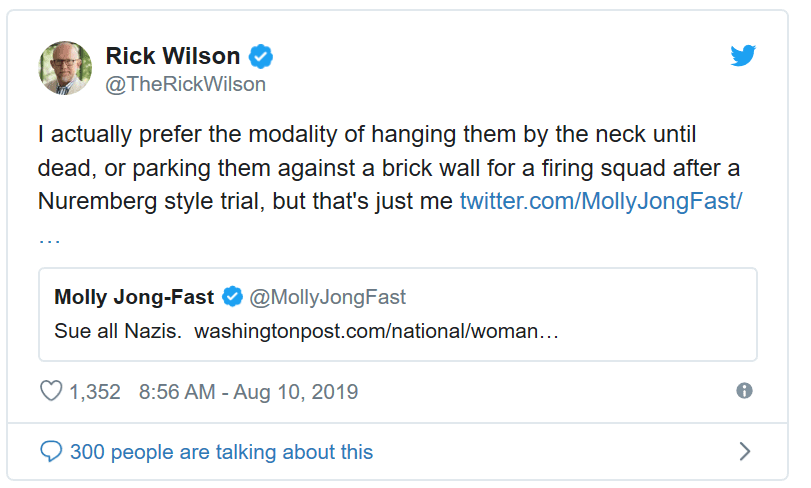 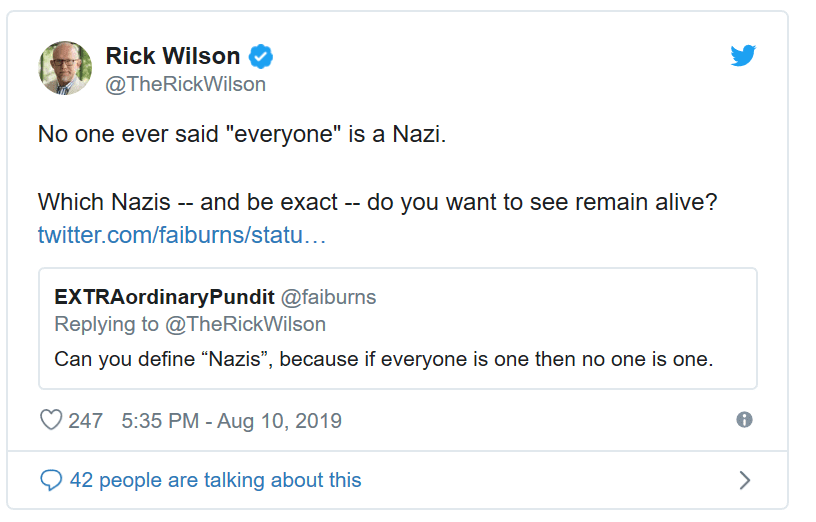 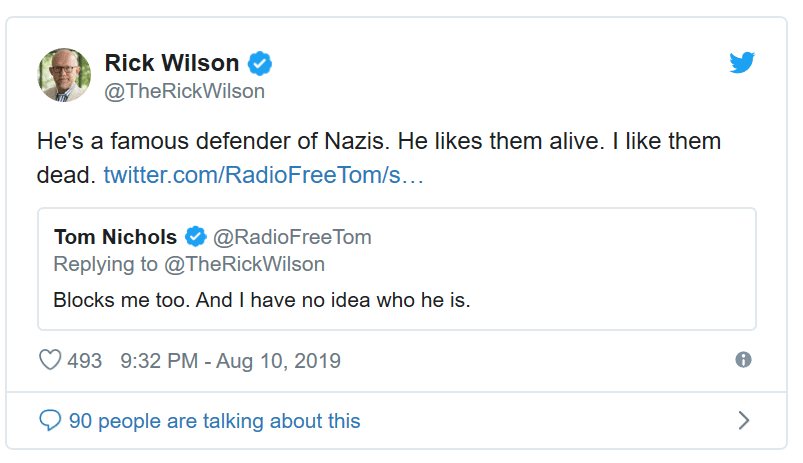 August 11, 2019 Portland Parish Protests POC Priest
Recent Comments
0 | Leave a Comment
"I attended a meeting last night for Girl Scout leaders in my area. There were ..."
Ruth Curcuru RIP, volunteerism
"I was a treasurer for a not-for-profit and got “dethroned” in a similar way. However, ..."
Jim Dailey RIP, volunteerism
"I have found that unless people were consistently voluntold to help out when they're young, ..."
Ame RIP, volunteerism
"Just wanted you to know that I have loved reading your articles!"
littlecanary New Job! A few personal updates
Browse Our Archives
Related posts from Jane the Actuary