A Byzantine Prayer for Election Day

It’s here; it’s finally here—Election Day, November 8, 2016. For many Catholics today has taken on virtually apocalyptic overtones—regardless of candidate. And, unfortunately, yesterday’s actions by Fr. Frank Pavone have only served to demonstrate and now reinforce how strongly people feel about this hallowed, secular feast and the results for which they hope.

Fittingly, however, today is something more important within my Church—the Ruthenian (or Byzantine) Catholic Church: the Synaxis of the Archangels Michael and Gabriel and of all the Heavenly Powers. That’s right—today is something like Eastern Michaelmas, the day we humbly beseech the protection and prayers of those immaterial powers also created by God.

Having gone to “St. Michael’s,” (my elementary and middle school), I am familiar with the Western version of the St. Michael Prayer, as, I’m sure, many readers are. But how many are familiar with the Byzantine Troparion and Kontakion for today’s feast?

Well, let us see what they might teach us on such a momentous, passion-inducing occasion. They are, respectively:

O captains and leaders of the armies of heaven, unworthy as we are, we beseech you without cease to surround us with your intercessions and cover us beneath the shelter of the glory of your ethereal wings. We bend our knee and cry out with perseverance: “Deliver us from danger, of Princes of the Powers on high!”

First off, we see these heavenly powers as “leaders” of “heavenly armies,” which protect us, aid us in the work of spiritual warfare. But further we are to “bend our knee and cry out with perseverance” to be delivered “from danger.”

Considering the prolonged torture that has been this election season, I don’t think many would disagree that this round has requires perseverance. But just as it has required perseverance, it has begged for, and too often lacked, humility, the bending of the knee, the willingness to entrust our protection and ourselves to His will.

The kontakion goes on to invoke the “servants of the divine glory” (and if they are servants, what can we be but beneath servants?). Note that it calls on them to “ask whatever is good for us, and bountiful mercy.” This is the equivalent of “Thy Kingdom come; Thy will be done on earth as it is in heaven.” We do not ask for what might gratify us: our party, our candidate, our outcome—no. We ask for “whatever is good,” entrusting ourselves to the divine through the intermediary of these created, immaterial powers, these “Princes of the leaders of the angels.”

And so, may this be our prayer this election day: not simply for a candidate, but for what is good, not merely for ideology but for spiritual advancement. As I have written before (examples here, here, and here), our theology is too often covered over in thoroughly human commitments. What could be a more providential feast for the election than this, the feast of these powers above us, who command armies fit for spiritual war, who cast out evil according to the mystery of the good—not the good that we wish, but the good that He wills. 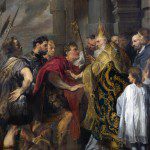 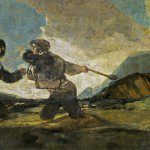 November 10, 2016 Confessions of a Catholic Anarchist in Trump’s America
Recent Comments
0 | Leave a Comment
Browse Our Archives
get the latest from
Jappers and Janglers
Sign up for our newsletter
POPULAR AT PATHEOS Catholic
1