A Hermeneutics of Liberation

“Live without cares, judge no one, vex no one, and honor everyone.” – St. Ambrose of Optina

“There is your brother, naked, crying, and you stand there confused over the choice of an attractive floor covering.” – St. Ambrose of Milan

I often say it, but I’ll say it again: it is the martyrs, confessors, and riff-raff who keep Christianity alive in my heart. By profession, I’m a “scholar”; much of my life is spent reading arcane texts, quibbling over small questions. This produces a tension in me: how to bring the lived experience of the Gospel into my work? How to marry a love for my neighbor to a love for knowledge?

I know, for example, that I’m much more likely to be moved to repentance reading about Christ’s death or Archbishop Romero’s than I am by approaching Aquinas’s Summa (with no disrespect intended to the Angelic Doctor). I would be lying if I said there weren’t overlap; my work on mystics, and medieval literature more generally, affords me plenty of opportunity to reflect on God’s love. But still, a tension remains.

I see at least one way to put the two together: hermeneutics. This big, scary word basically just means “theory of interpretation.” At bottom, it’s a Latinized version of the Greek word “hermeneutikos” (“of or for interpreting”, which is itself ultimately from “hermeneuein” (“to interpret”). It typically refers to the interpretation of texts, but, given certain changes in how most contemporary theorists talk about “texts,” anything can count—human speech, human action, Walmart, whatever.

What does this have to do with living the Gospel? Well, it’s a way of talking about one of the hardest things we are called to do in Christianity: loving our enemy. To uphold justice, to fight for the downtrodden, to keep love in our hearts as we face down opposition, is a nearly impossible task, a mixture of fortitude, charity, and humility. The verses are familiar enough:

You have heard that it was said, “An eye for an eye and a tooth for a tooth.” But I say to you, offer no resistance to one who is evil. When someone strikes you on [your] right cheek, turn the other one to him as well. If anyone wants to go to law with you over your tunic, hand him your cloak as well. Should anyone press you into service for one mile, go with him for two miles. Give to the one who asks of you, and do not turn your back on one who wants to borrow. You have heard that it was said, “You shall love your neighbor and hate your enemy.”  But I say to you, love your enemies, and pray for those who persecute you, that you may be children of your heavenly Father, for he makes his sun rise on the bad and the good, and causes rain to fall on the just and the unjust. For if you love those who love you, what recompense will you have? Do not the tax collectors do the same? And if you greet your brothers only, what is unusual about that? Do not the pagans do the same? So be perfect,* just as your heavenly Father is perfect. (Matthew 5:38-48)

I needn’t clarify how hard this is. I know in my own life that there have been moments of immense struggle with others. Most truly, these struggles have been within myself—battles to love in spite of anger, to live charity in spite of perceived injustice.

So, again, why hermeneutics? This discipline teaches us something so obvious as to seem ridiculous, and yet it is key: the first step in interpretation is always the most important. One might say that it all (or mostly) comes down to where one “enters the hermeneutic circle.” This “circle” is not all that complicated. In essence, it refers to the fact that one claim of understanding always relies on another and another through an infinite regress. Imagine asking your neighbor why he doesn’t like your other neighbor. He might say “because he leaves trash on his lawn.” You might then ask “why is that bad?” “Because it attracts animals.” “Why is attracting animals bad?” “Because they might bite someone.” “But I’ve never seen any dangerous animals around here, and he doesn’t leave any food out.” “Sure, but they could show up. Plus, it looks dirty.” “Why does it matter if it looks dirty?” “Because it might lower property values.” “It hasn’t yet. And why would that matter anyway? You don’t plan to sell your house any time soon. I thought you planned to live out your retirement here.”

And so on, and so on. Eventually, he may simply declare “I just don’t like him!” A long string of understandings, of ideas, has made his position possible. His presuppositions go deeper than he can probably imagine. This is true of all of us; in fact, this is why so many first-time readers of Plato find Socrates so annoying. 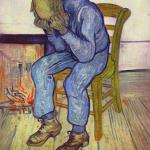 January 8, 2018 Desire and Its Discontents
Recent Comments
0 | Leave a Comment
Browse Our Archives
get the latest from
Jappers and Janglers
Sign up for our newsletter
POPULAR AT PATHEOS Catholic
1