Here, by “Eastern Christianity” I mean mostly “Byzantine Christianity,” what most people know through Eastern Orthodoxy, or, if they’ve had the joy of finding them, the various Byzantine-Rite Catholic Churches. There is, after all, a set of Churches known by the common tag “Oriental Orthodox.” It might make sense to think about them as “Orientalized” in one way or another. That, however, is not my goal here. In part, because I don’t know as much about them, but, more importantly, because they don’t tend to draw converts in the same way that Byzantine Christianity does.

This post, in truth, has largely grown out of my interactions with converts, predominantly to Orthodoxy, though also to Byzantine Catholicism. In my experience those who choose the latter with an Orientalizing mindset often end up the former before too long. This happened rather publicly recently within the Byzantine Catholic community—an ex-Latin Trad found the “wonders of the East” and very quickly found himself enmeshed in what (perhaps uncharitably) I’d call ahistorical, anti-Western polemic.

Here, then , I mean to address the “Convertodox” (though with the caveat that many such people can also be Byzantine Catholic). I mean to point to the unhealth ways in which a specific view of Eastern Christianity can harden the heart, and, though myth, ultimately deprive this glorious religion (and this particular rite) of so much of what make them wonderful.

For starters, we’ll need to know what “Orientalism” is. It’s most associated with Edward Said, a literary scholar of Palestinian Christian extraction who became very interested in exactly how Westerners conceptualized their Eastern neighbors. This could mean anyone: the despotic Persian as painted by the Ancient Greeks, the decadent Turk as understood by Early Modern Europeans, the feudal Russian as portrayed by 18th-century Europeans, or the hive-mind Chinese as conceptualized by modern Americans. In most cases, Orientalizing glances comprehend their object in terms of despotism, earthiness, and luxury. How many accounts have we read of the bejeweled ancient Persian kings, treating all their underlings like chattel? How many times have we heard the story of the mythic East, in which emperors live like gods, owed complete loyalty by their subjects? Its roots, as hinted, go far back, but it becomes easiest to identify in the 19th century:

Depictions of Islamic “Moors” and “Turks” (imprecisely named Muslim groups of North Africa and West Asia) can be found in Medieval, Renaissance, and Baroque art. But it was not until the nineteenth century that “Orientalism” in the arts became an established theme. In these works the myth of the Orient as exotic and decadently corrupt is most fully articulated. Such works typically concentrated on Near-Eastern Islamic cultures. Artists such as Eugene Delacroix and Jean-Léon Gérôme painted many depictions of Islamic culture, often including lounging odalisques, and stressing lassitude and visual spectacle. When Jean Auguste Dominique Ingres, director of the French Académie de peinture, painted a highly colored vision of a Turkish bath, he made his eroticized Orient publicly acceptable by his diffuse generalizing of the female forms, who might all have been of the same model. Sensual depictions of the erotic Orient were acceptable; a Western scene dressed similarly would not be. This orientalizing imagery persisted in art into the early twentieth century, as evidenced in Matisse‘s orientalist nudes. In these works the “Orient” often functions as a mirror to Western culture itself, or as a way of expressing its hidden or illicit aspects. In Gustave Flaubert‘s novel Salammbô ancient Carthage in North Africa is used as a foil to ancient Rome. Its culture is portrayed as morally corrupting and suffused with dangerously alluring eroticism. This novel proved hugely influential on later portrayals of ancient Semitic cultures. (Newworldencyclopedia.org) 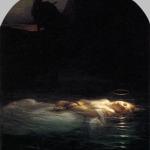 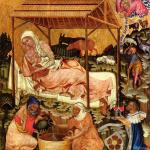 April 12, 2018 Christian Materialism?
Recent Comments
0 | Leave a Comment
Browse Our Archives
get the latest from
Jappers and Janglers
Sign up for our newsletter
POPULAR AT PATHEOS Catholic
1