It’s with horror and fascination that I watch Donald Trump jockey to be the Republican candidate for president. It would be an humorous diversion if there weren’t so many people who seem supportive of the idea. It’s almost as if Mike Judge’s classic film Idiocracy was some sort of prophecy.

On July 26, 2015, CNN posted the results of a political poll revealing quite a bit about the grass-roots support of the Donald Trump candidacy. There were no huge surprises, but in an article summing up the poll’s responses, this paragraph jumped out at me:

“The majority of those Republicans surveyed that wants Trump to remain in the race includes numbers of those seen as the core of the GOP primary electorate: 58% of white evangelicals, 58% of conservatives, and 57% of tea party supporters.”

58% percent of white evangelicals!? Seriously? At first I thought, “well, it’s obviously just a bad poll” but the more I thought about it, the more I realized that, in many ways, Donald Trump is American evangelicalism’s perfect doppelganger. Here are three things about Trump that might be resonating with evangelicals (because we recognize it in ourselves):

1. He thinks he’s an outsider (spoiler alert: he’s not)

Trump’s whole race is predicated on the idea that he’s a political outsider and the answer to everyone’s frustration with Washington. The problem is that he isn’t really an outsider. He might be newer to the political process, but he has the only thing that’s really important to the process — money!

The whole problem with Washington is money. Wealth and lobbying has had such a corrosive influence on the political climate, and that’s what Trump brings to the table in spades. He is constantly selling his billionaire status as a sign of his success and why he would make a great president, and then consistently demonstrating that his wealth and privilege isolates him from understanding issues like immigration and the problems experienced by common, middle-class Americans.

He’s just not the stranger to the political process that he’d like to imagine himself to be. His privilege has put him in the same circles and processes that most political pundits frequent. In fact, the way Trump’s donations have been courted by politicians, he’s more insider than he’d have us believe.

Like Trump, American evangelicalism likes to think of itself as an outsider. We’ve developed a mythos that makes us the put-upon and abused minority existing on the outskirts of American culture, but it’s just not true. The fact that we want to believe we’re outsiders leaves us just as out of touch as the Donald.

Christianity has spent over a century at the center of cultural authority in the U.S. When prayer was practiced in schools, it was Christian prayer. When we’ve had faith-based monuments in public spaces, they’ve primarily been Christian.  For decades, despite how evangelicalism views itself, it’s been one of the most courted demographics in American politics.

Evangelicalism was born into social influence in the same way that Trump was born into wealth. And every time there is a small shift toward equability for people who don’t share our values, it solidifies in our minds the idea that we’re outsiders. We try to establish our place at the head of the table by appealing to the Judeo-Christian values America was founded upon in the same way that Trump points to his success on NBC’s The Apprentice as a sign that he’d make a great commander-in-chief.

It’s no wonder that evangelicals love Trump; he’s spinning the same fable we are.

2. He exalts candor over wisdom

One thing I hear over and over from people is, “Trump tells it like it is. He’s not afraid to say what we’re all thinking.”

But then I look at some of his gaffes:

I think that if Trump is saying the kind of things you wish you could say, there’s a problem.

In a recent Twitter back and forth, Trump got into a war with Modern Family writer Danny Zuker. I can assure you that a sitcom writer would see an exchange like this as sport, and someone like Trump would be entirely outgunned (which he was). The problem here is that Zuker isn’t maneuvering to be the leader of the free world. I’m not sure that Trump is the guy I want negotiating with world leaders.

In a similar fashion, there’s a growing tendency lately among evangelicals online (and otherwise) to devolve into personal attacks. Learning to speak appropriately and disagree in a way that allows others to maintain their dignity should not only be a trait we expect from leadership, it should be a distinctly Christian trait. The fact that we increasingly think it’s okay to personally eviscerate people we’re at odds with says that we’re completely disconnected from the vine (John 15:5).

It’s a sad state of affairs when “telling it like it is” is so much more important than speaking wise, timely words.

If you look at Trump’s record of political donations, over half of the $1.3 million he has donated has gone to the Democratic party. What’s even more surprising is that it’s usually been in local political races where he has vested real estate and casino interests. It’s curious that he would run as such a conservative candidate.

But weird inconsistencies are all part of the Trump mystique. He decries the outsourcing of jobs to China, while having his goods made there. He’s a proponent for “traditional marriage” who’s been married three times. He claims that McCain isn’t a war hero because he got caught, yet he was able to avoid military service all together.

It’s living with these kinds of inconsistencies that American Christianity has grown so comfortable with. We often see nothing weird about being strongly pro-life but against “socialist” programs that would ensure that not aborted babies of single mothers would have adequate food and housing. We consider ourselves travelers and sojourners in this world following a God who considers all the nations of the world to be simply dust on the scales (Is. 40:15), but we’re fiercely nationalistic and patriotic. We’ll dismiss anyone who doesn’t believe that the Bible is God’s word, but less than 20% of us read it on a daily basis.

When you consider the Janus-faced aspects of evangelicalism, it’s no wonder that we wouldn’t bat an eye that Trump seems entirely detached from his public relations persona.

Maybe it’s time to take a step back and ask ourselves what we see in this guy? He might not be the typical politician, but there’s definitely a potential Herod aspect to him — without any of the religious affiliation.

The fact that so many evangelicals are so enamored with him makes me incredulous. The outcry used to be that we need to elect a guy (and only a guy) that represented our theological interests, Trump doesn’t even have that going for him.

In the end, maybe evangelicalism is drawn toward Trump because looking at him is like looking in a mirror — and maybe that fact should give us a reason to pause and recalibrate. 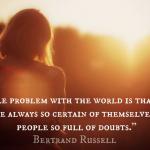 July 23, 2015
5 Tips for Developing Opinions Worth Having
Next Post 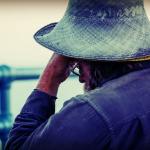 July 30, 2015 I'm Sorry. I'm Really Doing My Best to Care about Everything
Recent Comments
12 Comments | Leave a Comment
Browse Our Archives
Follow Us!

What Does The Bible Say About...
Religion Prof: The Blog of James F. McGrath
Related posts from Honest to God