“For God so loved the world…” Growing up, I heard it incessantly. We were a large church, though not large enough for someone to come down the aisle every Sunday. But when they did, everyone celebrated. We just knew that God had brought us a piece of the world. That is, until the world started to include black folk.

In the days of my youth, our community started to change rapidly. The City of Atlanta seemed to shift down. Clayton County became a scary place for racists and they started moving to Henry County. Much of our church joined churches a couple of exits down the road.   Ferociously resistant to change, our church dwindled rapidly. Nobody could figure out what was going on. That is, until they did. Finally, somebody said, “Let’s just invite the community in!” Everybody left was all in, until our first black member joined. I remember people standing and leaving. They all went to the land of white dreams, Henry County.

The brutal beating of Desmond Marrow by the Henry County Police Department doesn’t surprise me. In fact, it wouldn’t surprise me if some of those officers once went to church with me. In their faces, I saw the same faces of those who stormed out of our church. When fear and racism mix, violence comes quickly. White dreams become black nightmares. Whether they know it or not, these brutalizing officers are racists. They are defending the white dreams that folks migrated for. Many cannot believe what they’re experiencing. They moved to run from black people. Now, black folk are back. There will be consequences if the racism continues.

Years after growing up in Clayton County, I moved to North Texas. Since my migration, I have become a leader in the movement against police brutality. On July 7, 2016, I organized a large rally in Dallas. The mood was soaring. Progress was ours. I was up front. Shots rang out. Not far from were I stood, I saw a bloody tragedy unfold. Five officers were dead and untold others were injured. Racism brought us unspeakable violence.

In the midst of it all, I thought about Clayton County. The place where I was taught to embrace change. I hope Henry County thinks about its neighbor. Desmond Marrow didn’t deserve this. Now, Desmond Marrow deserves to see swift change. Officers must be fired. Officers must be prosecuted. The Police Department must be reformed. Desmond Marrow’s life must be restored. If Henry County will stop fighting change and embrace their community, they can avert the tragedy of Dallas. No more white dreams. No more black nightmares. If they do not, greater violence is inevitable. 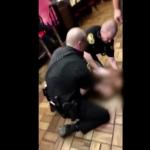 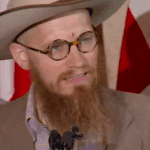 May 4, 2018 NRA! PRESIDENT TRUMP! WE ARE GOING TO SHUT YOU DOWN!!!!!!! / Words from Dallas
Recent Comments
0 | Leave a Comment
""Decolonizing Jesus? : Is this a joke?"The whole history of the mythology of an historically ..."
rationalobservations? Decolonizing Jesus? : Is this a ..."
"I have no sympathy for those who died in TЯA☭tor-TЯ🐽m₽'s attempted coup rampage on the ..."
Ocelot Aardvark Officer Brian Sicknick Speaks! : Trump/Trumpsters ..."
"At one time, I thought voting was not in tune with God's Will. But since ..."
Ocelot Aardvark Would Jesus Vote? // Moral Decisions ..."
"Why are you so boring? You post the same opinion every time you comment.I even ..."
Ocelot Aardvark Would Jesus Vote? // Moral Decisions ..."
Browse Our Archives
get the latest from
Jeff Hood
Sign up for our newsletter
POPULAR AT PATHEOS Progressive Christian
1