The Existential Threat: God or Government? / President Trump as Antichrist

The Existential Threat: God or Government? / President Trump as Antichrist

I met a man on the road that was consumed with the dumbass this morning.  Though professing to be a firm believer in both God and Trump, it didn’t seem to me that he really knew anything about either.  For, his God was Uncle Sam and his Trump was the incarnation of such.  After he blubbered about for a few minutes, I asked him about the relationship between Ceaser and God.  What type of church would host a political candidate like this?  It was clear that he didn’t know what in the hell I was talking about.  Shit, I might as well have been talking about Littler Ceaser’s as far as he was concerned.  Then he took it to the next level, I don’t know much about all of that…but if you keep protesting next to my driveway…people are going to think that I’m a homosexual.  To which I quickly replied, I don’t think you have anything to worry about sir.

The separation of church and state should be amongst the most sacred beliefs of any Christian. We serve a much higher cause than politics…namely love.  However, there are times of chaos that force us to choose between our most sacred beliefs and love.  We are now in such a moment.  There is nothing loving about professing neutrality as evil is committed all around us…in our names as citizens.

I’ve chose to refer to President Trump as the government so as not to leave out all of those who have helped him in his reign of terror.

This morning, I came face to face with our government.  The weather was cold and rainy.  I should have worn warmer clothes (I’ve actually caught a cold…).  I think I just forgot…I was thinking about whether I needed to go or not.  I have always been quintessentially opposed to endorsing political candidates…but I came to the conclusion that I was condemning hate much more than I was endorsing anything.  With my robe on (that has joined me for countless protests) and holding my cross, I stood across the street from Alliance Bible Fellowship…where Vice President Pence was speaking.  For hours, I prayed that the evil before me would be vanquished…not by violence…but by the coming election.

While I still deeply believe in the separation of church and state…and by no means see Joe Biden as a savior (or anything close)…I can’t remain quiet…love demands more. President Trump is evil {.}  His actions have been and will be antithetical to the Gospel of Jesus Christ…we call such persons Antichrist.  There is absolutely no way to love your neighbor and vote for this man.  This is an existential moment for so many.  How can we stand by as so many more people die?  Love demands more. Whose side will you be on? God or government?  Choose wisely….for love is at stake.

Lastly, while I pray for the man I met this morning…I pray that his God gets his ass kicked on Tuesday.

October 26, 2020
"Somebody's In Our House!"  Continued Escalating Harassment in Ashe County.
Next Post 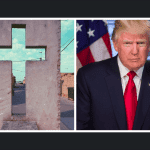 November 5, 2020 Jesus or Trump?:  A Short Note to Fellow Christians
Recent Comments
0 | Leave a Comment
"The Bible and the Constitution are two different documents that serve different purposes. They should ..."
Spiritwalker444 The Existential Threat: God or Government? ..."
"You totally missed the point of Jeff’s post. He is not talking about the election. ..."
Martha Anne Underwood “Trust the Process”…The Last Words You ..."
"Amen!"
Martha Anne Underwood The Creation of God: A Vision
"If you're not aware of it, Process theology, in its somewhat-varied forms, is the best-developed ..."
Howard Pepper The Existential Threat: God or Government? ..."
Browse Our Archives
get the latest from
Jeff Hood
Sign up for our newsletter
POPULAR AT PATHEOS Progressive Christian
1