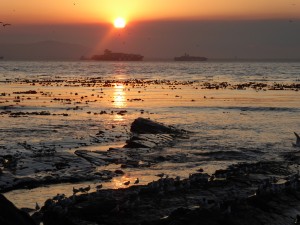 On Friday morning, I woke early, got dressed and went for a walk with my camera in hand as the sun rose. My first stop was an abandoned lime quarry where deer grazed in tufts of grass that have grown up in the last 20 years. They scrambled up the hillside as I stood on the edge of the quarry, not entering its sacred ground. 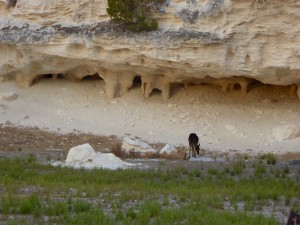 A short walk down the road, I was serenaded by an odd snorting honking noise, which I’ve come to learn is a penguin mating call. Old abandoned buildings were luminescent in the early morning light. 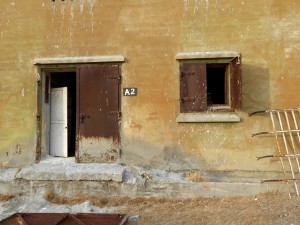 I found a friend along the way who walked with me to the edge of the island where we watched flocks of penguins and African Black Oystercatchers and were tailed by seagulls who incessantly croaked either a welcome or a warning. 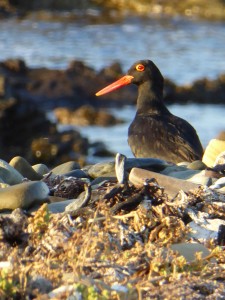 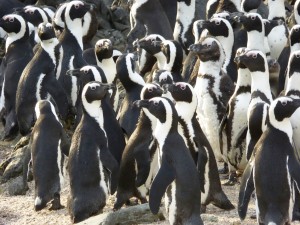 The time was getting short until breakfast, so we headed back, stopping one more time. As the staff was preparing for the day’s visitors, we gingerly stepped into the courtyard in their full view. Walking through open doors, we found ourselves alone in the long hall way lit by shafts of sunshine. 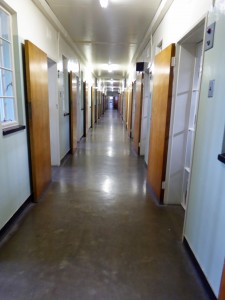 We counted down until we found the fourth cell from the end, the cell where Nelson Mandela spent most of his 27 years in prison. We were giddy and reverent all at once at the privilege of being alone in this place, imagining how many mornings Mandela had woke here, the conversations he had with his fellow prisoners across the hall, the loneliness that must have consumed his nights. Desmond Tutu says that it took 27 years in prison to transform him from an angry young rebel into a peacemaker full of forgiveness. That beautiful journey unfolded in the isolation of this small room with just a sink, a bed roll, a tiny table and a pot to relieve himself at night. 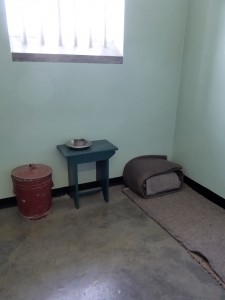 Just three days past, it seems like an unbelievable dream to have spent 5 days on Robben Island. I was part of just a few groups who have been given an invitation to stay overnight. We slept and ate in the convict minimum security prison in large dorm rooms down the street from the maximum security prison where Mandela and other political prisoners were kept. Fifty peacemakers, activists and a few pastors from around the world gathered for five days to build community as we discussed the question, “What does forgiveness have to do with justice?” The event was organized by a wonderful organization in Cape Town, The Warehouse, that works to serve churches in their response to poverty, injustice and division.

Robben Island has been rightly designated as a World Heritage Site with all the protections that affords. The entire island is a living museum. Touring groups are guided through the maximum security prison by a former prisoner and are given the opportunity to see Mandela’s cell as well. They are then driven around the island in buses before returning to the mainland on the ferry. Some who work on the island live there in the former guard residences. The freed prisoner who guided our initial tour now lives on the island with his former guards as neighbors and they gather as neighbors to watch sports.

Mandela made notes about making Robben Island into a prison that are included in the book of his gathered notes and interviews, Conversations with Myself.

Dpt. of Art and Culture etc

Beyond range of ordinary

Museum must be a source of

Reading these words, I hope that our week honored his intentions. The reverence was palpable as we treaded lightly on sacred ground. And the experience truly was beyond the range of ordinary and a source of incredible inspiration as we heard the stories of those who have lived there from the leper colony to Islamic prisoners who built a mosque to the prisoners who were contemporaries of Mandela and the almost completely untouched landscape that is a habitat for so much wildlife. Mostly, I think Mr. Mandela would have been honored that a handful of people who are working for peace and justice in 2016 gathered in this place to continue the work to which he dedicated his life.

I tried to leave my sense of unworthiness behind in Oregon, but it kept jumping back in my suitcase. For five days, I sat in a room with passionate and gifted people who are changing the world through justice and advocacy in their contexts, many of which are desperate. I am a pastor of a Presbyterian church in a resort town, which has its injustices, but they largely pale in comparison. I am determined that the week on Robben Island has to be about much more than my own enrichment. In addition to continuing my work for a world that reflects the love of God, all I know to do is to write and speak about it as much as I can. Maybe the seeds planted in me can grow in others and blossom in the flourishing of justice, forgiveness and reconciliation. With that prayer, I offer a series of posts over the coming days that include reflections on privilege, reconciliation, justice, forgiveness and the pure beauty of Robben Island.