What Every Christian Should Know About Islam by Rob Phillips 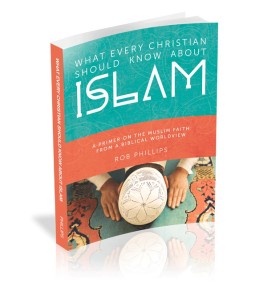 What Every Christian Should Know About Islam by Rob Phillips

What Every Christian Should Know About Islam by Rob Philips touts itself with the subtitle: A Primer on the Muslim Faith from a Biblical Worldview. In Chapter 1, Phillips provides an excellent overview of the religion of Islam. In the overview, he covers the history of the religion, as well as the different sects of Islam (Sunni and Shi’ite). He explains what they believe as well as their source of authority.

In Chapter 2, Phillips compares the beliefs of Christianity and Islam. He gives detailed chapter and verse from both the Bible and the Qur’an. He compares and contrasts the beliefs about God, Jesus, the Bible, salvation, sin, as well as heaven and hell. In Chapter 3, Phillips focuses on the question: “Do Christians and Muslims worship the same God?” One might think from reading Chapter 2 that Muslims and Christians worship the same God. Phillips makes it clear that this is not the case. By asking the following questions, Phillips shows the clear contrast between the Christian God Yahweh and the Muslim God Allah.

Only the Christian God Yahweh can answer these questions in the affirmative.

In Chapter 4, Phillips describes the difference between the two sects of Islam, Sunni, and Shi’ite. He gives a brief history of Islam after the death of Muhammad. Those who believe that the leadership of Islam should be based on the consensus of the faithful are Sunnis. Those who followed the fourth caliph Ali, who traces his bloodline back to Muhammad, were known as Shia. Phillips compares the differences between these two groups loosely with the Catholics and Protestants. He notes that both sects of Islam are in agreement that they should oppose Christians and Jews.

Phillips compares the lifestyles of Jesus Christ and Muhammad as role models for their followers in Chapter 5. He answers the question “Why are there Qur’ans?” in Chapter 6. He then addresses the notion of Chrislam in Chapter 7. In Chapter 8, Phillips investigates the Islamic doctrine of deception called Taqiyya and the doctrine of Abrogation. He challenges Christians not to use the same tactics of deceit and violence when they share the gospel.

In Chapter 9, Phillips describes how Islam makes peace. He states that Islam is a religion of peace, as long as peace is defined in Muslim terms. Then Phillips introduces the doctrine of dhimmitude.

“Dhimmitude is the path to peace for the non-Muslims may choose when their land and people are claimed for Islam.”

After reading this, I personally wonder if this will be the conditions set in the agreement between the Antichrist and Israel in the final treaty which he will break. Will the world have peace if Christians and Jews in the Middle East submit to Islam by dhimmitude? Is this the kind of treaty which the Antichrist breaks? If so, this would explain why he decides to kill all of the Jews and Christians (Matthew 24:15-22, Revelation 13:5-10).

Phillips follows this chapter with another one on Jihad (Chapter 10). Phillips urges Christians to help Muslims to consider that the crucifixion of Jesus Christ, the most violent death in history, will accomplish more for them than any jihad. In Chapter 11, Phillips shares an interview of a former Muslim, and then ends the book in Chapter 12 with a quiz on Islam for the reader.

Phillips is a talented writer as one can see in the flow of this book. He does a very good job to give the reader a summary of what any Christian needs to know about Islam. As Phillips points out, the book was designed for Christians to help reach Muslims for Christ. This book will help the reader get a good start.

What Every Christian Should Know About Same-Sex Attraction

What Everyone Should Know About the Afterlife

April 1, 2015 The April Fool's Joke on Jesus
Recent Comments
1 Comment | Leave a Comment
"Good study ....but example from ot charater may be inserted"
A TAMIL MARAN Nahum 1:1-7 Giving Comfort
"I am impressed with this interpretation and it is easy to understand. Thank you."
Anne Horst Ahrens Revelation 14:14-20 The Two Great Harvests
"Dear Sir,I've been blessed by reading life-changing messages from these top 10 sources of free ..."
Mike Nkwa Top Ten Sources of Free Sermons
"2. Christian integrity cannot be separated apart from a relationship with JesusThen everyone who has ..."
bill wald How to Grow a Balanced Christian ..."
Browse Our Archives
Follow Us!

A List of Sins from the...
Christian Crier
Related posts from Jim Erwin