Do you remember NAFTA (North American Free Trade Agreement)? These agreements are similar. While NAFTA created free trade zones from Canada to Mexico, these agreements would have a similar effect with countries from the Pacific and the Atlantic who trade with the United States. Because of NAFTA, many people are saying this is a bad deal. Elizabeth Warren has stated her opposition from the left-wing of the Democratic party. Tea Party Republicans have a problem with both the “fast track” process and the trade agreements as well.

There are a variety of dangerous parts to these agreements which one sees will be reflected in the future (which is why I called this a Prophecy Watch.) First, more power will be taken away from democratically elected officials of individual nation-states and placed in regional hands. This jeopardizes the sovereignty of nation-states. It also puts the power of trade agreements in the hands of corporations. (This is what the argument over Investor-State Dispute Settlement (ISDS) is all about.) The fact these agreements have been made secret reinforces this danger.

Second, more countries will be tied together economically. As one watches what is now going on in Greece, the more integrated the economies, the more difficult it becomes to help overcome economic problems. One goes from nation-state leaders, to regional supra-national union leaders (like the G8 and the European Union). In the end, there can be only one (leader). (I wrote about the merging of countries and the consolidation of power elsewhere.)

Where does this lead us? It leads down the path of the Bible has predicted. Combined with other international issues (such as Iran, Iraq, ISIS, and the Israeli-Palestinian problem), one can read the news and see Bible prophecy come to fulfillment.

April 24, 2015 Isaiah 41:17-20 God Does the Impossible to Provide
Recent Comments
0 | Leave a Comment
Browse Our Archives
get the latest from
Jim Erwin
Sign up for our newsletter
POPULAR AT PATHEOS Evangelical
1

The Signs of Wilmore, Kentucky: A...
Anxious Bench
Related posts from Jim Erwin

Evangelical
The Syrian Civil War and the Rise of...
Jim Erwin 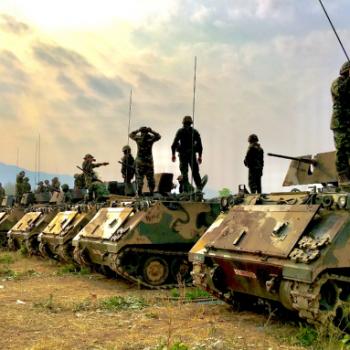 Chadwick Boseman's Inspiring Graduation Speech at Howard--- a...
Many of you will know Chadwick Boseman from his playing the Black...
view all Evangelical blogs
What Are Your Thoughts?leave a comment
Copyright 2008-2020, Patheos. All rights reserved.