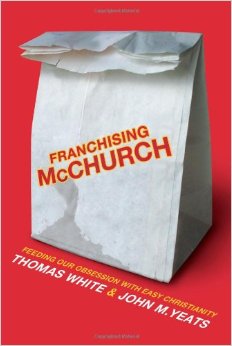 Franchising McChurch by Thomas White and John Yeats, states as its subtitle thesis: Feeding America’s Obsession with Easy Christianity. White and Yeats look at a variety of trends in the modern church growth movement.

They use the term “McDonaldization” as a metaphor to explain how the church has changed.

processes by which the principles of the fast-food restaurant are coming to dominate more and more sectors of American society as well as the rest of the world.

Because of this McDonaldization, the new postmodern generation has become disenfranchised from the church. White and Yeats list a set of trends that show how effective churches work in this new postmodern environment:

1. Effective churches keep the main purposes of the church in focus when setting budget priorities.

2. Effective churches surrender to God’s timetable rather than forcing God to conform to theirs.

3. Effective churches emphasize the ministry roles of the entire congregation.

4. Efficient churches place church systems and programs above the spiritual needs of people.

White and Yeats make a few prescient observations. For example:

White and Yeats advocate generational discipleship. The authors accurately warn against the coming McDenominations – in which megachurches create brands and work in networks outside of the traditional denominational structures. (like Saddleback and Willow Creek, and most recently Acts 29). They warn pastors against accepting the latest ideas and trends. They give effective reasons why following these McDenominations will probably not work for the small church. They advocate holiness versus size.

They discuss the problem of consumerism in the church. Consumers and the church affect church growth negatively. People come because it is the thing to do, but they don’t grow spiritually. Churches catch a market, but don’t have true conversions. White and Yeats re-enforce the fact that Jesus expects the church to make disciples.

Using the example of Gideon, White and Yeats question the reasoning of small churches to use church growth methods and resources. They rightly explain how Industrialization has had an impact on the American church growth movement. White and Yeats warn against the “Shepherd as CEO” model of pastoring a church.

White and Yeats explain the dilemma of the church as a theological continuum. One side has the church maintaining theological integrity and a healthy focus on evangelism. The other side would be churches that have consumerism and could be called McChurch.

White and Yeats identify different decisions which reinforce the consumer mentality. These ideas include:

1. Performance of the band in place of corporate singing.

2. Different worship styles reinforce the consumer mentality based on choice.

McDonaldization is based on four characteristics:

These same four characteristics can be found in the multi-site church model. White and Yeats even show how this has changed the nature of the modern sermon. As a result, White and Yeats say that you should not preach someone else’s sermon. Steve Sjoren however, states that there is nothing wrong with using content from another’s sermon.

Personally, I don’t think it is a problem as long as you “cite the source.” Either footnote where you found the information, or give credit by saying you are quoting someone else. Otherwise, this is plagiarism. Pastors have been fired for preaching other people’s sermons without citing the reference. Plagiarism in the pulpit has been cited in many sources recently. Others not included here are Mark Discroll and Mars Hill Church.

White and Yeats call this preacher consumerism. In reality as the authors state, if they don’t cite their sources, it is theological theft.

McChurching turns preaching pastors into “directional leaders.” In essence, pastors become librarians of sermon material while they personally guide and lead the church. They delegate their preaching to pastors on video. One example is Heartland Community Church in Rockford, Illinois.

The danger of letting writers write sermons for pastors is that you end up outsourcing your sermons to potential unbelieving non-Christians.

The problem is summarized in the following quote:

A modern McChurch in a postmodern society is a “secular Church in a spiritual society.”

White and Yeats end with a series of criticisms of the multi-site church movement and advocate church planting. They end with a call to quit the McChurch mentality and to look with an eternal (or kingdom) perspective. They stress that not only will individual Christians be accountable, but so will churches. I have to agree with this sentiment. I have read a wide variety of books on church planting, and I would say that this book should be on the shelf of every pastor. This gives the pastor effective reasons to avoid the secularization of the church and allows them to critically think about why a church should plant another church, and not just franchise their own.

On Misreading Winning and the Mandate of Heaven...
Times look bad  and the temptation is to extrapolate from who is...
view all Evangelical blogs
What Are Your Thoughts?leave a comment
Copyright 2008-2020, Patheos. All rights reserved.