Rewilding the Way by Todd Wynward 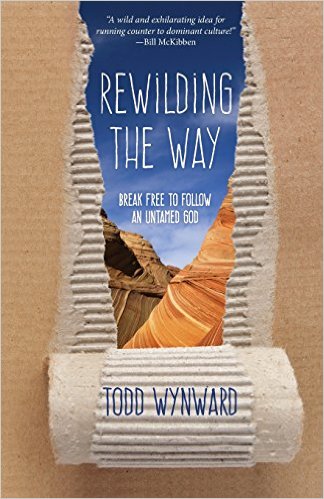 Rewilding the Way by Todd Wynward

Rewilding the Way by Todd Wynward is a book that encourages the reader to (as the subtitle suggests) “break free from an untamed God.” The book is divided into three parts. As a result, I will review this book in three parts as well.

PART I: OUR PREDICAMENT, OUR POTENTIAL

Wynward states his approach as rewilding spirituality. In conservation biology, where people take the land and bring it back to its wild state. Wynward suggests that Christians should rewild themselves back to the “Jesus Way.” Wynward describes the current predicament and the potential as children of God, and “the wilderness testing that has always been God’s way to craft a transformed people.”
Wynward begins by sharing his journey into the Christian faith. He shares his struggles with leaving “lame and tame” Christianity and entering a more wild faith. Mark 10:17-30 was a challenging Scripture for Wynward. Ultimately, God changed Wynward and called him in faith to follow Christ.

Wynward states the case that prevents Christians from being the best Christians they can be in our modern American society – consumerism (20):

So here’s our modern dilemma: we avoid absolute renunciation for good reasons, but then we completely cave to dominant culture. We may have deep relationships and wonderful worship experiences within our church communities, but we still cozily conform to consumerism.

Based on Luke 3:11 and Luke 19:8, Wynward states that the Bible encourages Christian not to just give everything away. He observes that we should “give half away and keep living in the world” (21). Wynward is influenced by the Progressive Christian movement, and he makes a valid call: Conspire with God on His dream to make Heaven on Earth.

Wynward warns that affluenza is the pandemic of our time (27-29). Wynward points to Moses as a model for rewilding our faith (33-36). Moses learned skills and a wild and living God in the wilderness that would help him rescue his people from slavery later. Wynward shares a unique interpretation of Isaiah 40:3 that promotes his rewilding view (37). He uses the wilderness metaphor as a way to encourage people to “rewild” their faith. There was a “wilderness teaching tradition” that impacted the faith of people for a long time (54).

Wynward notes that in the Lord’s Prayer (Matthew 6:13, Luke 11:4) Jesus uses “peirasmos” in this case to mean the temptation of self-absorbed sedation—unconscious distraction that leads us off course. It was the reason Jesus told his disciples to stay awake while he prayed in Gethsemane (Luke 22:39-46). Wynward rewrites the Lord’s Prayer as a new meditation to consider (63):

Wynward explores seven pathways we can pursue to become deeper allies of God. In this “rewilding” of the Beatitudes, he shares the following seven pathways:

“He notes that the word hell is not mentioned in the books of Moses, the Pentateuch. Neither Paul

nor John uses the word. The bottom line: eternal damnation for all non-Christians is not the worldview of the Bible.”

As Wynward explores these pathways, he shows how to see a “rewilding” faith. His mentor Richard Rohr showed that the opposite of faith is not doubt, but rather anxiety (172). This explains why Jesus spoke more about overcoming fear rather than doubt. Wynward experiment of “Have2Give1” (172-173) based on John the Baptist’s and Jesus’ teaching on stewardship (Luke 12:33) is insightful and probably a better tool to teach Christians how to deal with money than anything I have seen.

The result of following these pathways is to be more love-spreading, culture-defying, fear-abolishing, Earth-honoring followers of the Jesus Way.

PART III: OUR WORK AHEAD

Wynward outlines our work ahead in Part 3. He highlights some of the Spirit-filled cultural initiatives and social movements that are already shifting our society toward a positive future in an uncertain time. For example, he cites the Mennonites as an example of a group who live more with less. Wynward challenges Christians to join the Transition movement (193). He advocates for creation care (197-198). But some of his ideas for creation care seem a bit odd. For example, he wants to give civil rights to nature (as if nature were a person) (208-216). He also encourages Christians to practice “watershed discipleship” (220-230) – a form of Christian environmental ethic. He believes that it is the church’s responsibility to be reconciled with the Earth (233-234). He continues to speak of the values of sustainability of the Earth by the churches – a merging of Christian practice and creation care which is influenced more by sustainable development than by Scripture. His reading of the concepts of the Sabbath, the Jubilee Year, and shalom are superseded by the environmental conservation movement. Wynward’s knowledge of the Scriptures is strong, but his application is tainted and unrealistic with regard to creation care. He cites the New Community Project as a model for Christian churches (252-257).

I was impressed at first with the book as I began to read it. Parts 1 and 2 were consistent with the theme of “re-wilding.” Although I may not agree with Wynward’s Progressive Christian leanings, I could follow his logic – until I reached Part 3. It almost seemed like he veered off-course in his thought. Instead of “re-wilding” the church and creating new communities that apply the seven principles in Part 2, Wynward becomes too concerned with creation care and ecological evangelism (if one could use those two words together). Although he tried to “re-wild” the imagination of the reader and stoke some new-found Christian insights, I found his attempt tame in the end.

Will Your (Christian) College Close?
College closures have long been part of the story of American higher...
view all Evangelical blogs
What Are Your Thoughts?leave a comment
Copyright 2008-2020, Patheos. All rights reserved.