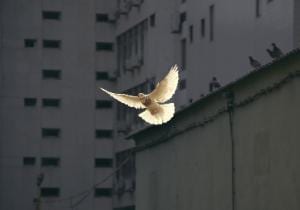 “But the fruit of the Spirit is love, joy, peace, patience, kindness, goodness, faithfulness, gentleness, and self-control. The law is not against such things.” (Galatians 5:22–23, CSB)

Two painters were in a contest where each said they could paint a picture of peace. One painter painted this sunset with the sun going down over the calm water. It all looked very nice and the picture had a very calming effect. The other painter painted a picture of a storm. In it, the sky was dark and there was lightning, thunder, and dark clouds rolling overhead. The picture showed the waves crashing against the rocks. Things looked fairly chaotic. But in the corner of the painting, at the bottom, were two big stones with a bird in the middle of them. The bird was singing. Now that’s peace. Peace is where God’s calm and God’s tranquility overrule your concerns.1

The love of God brings the joy of God that leads to the peace of God.

“Now may the God of hope fill you with all joy and peace as you believe so that you may overflow with hope by the power of the Holy Spirit.” (Romans 15:13, CSB)

The Christian who develops love and joy in their life will also want to experience peace. However, in life, not every experience is a peaceful one. How do I as a Christian develop Christian peace? How does the Holy Spirit help me develop peace in my life?

I have to follow the Holy Spirit’s plan for peace in my life. There are various agencies and countries that have developed plans for peace. The Good Friday Agreement is one such plan for peace between Great Britain and Northern Ireland. The United States has worked with others to develop a roadmap for peace in the Middle East. The Holy Spirit has His own PEACE plan. He has established an effective way to have peace in my life. A simple to have peace in five steps.

THE HOLY SPIRIT’S PEACE PLAN FOR MY LIFE

Peace is the result of living the Christian life

“for the kingdom of God is not eating and drinking, but righteousness, peace, and joy in the Holy Spirit.” (Romans 14:17, CSB)

“Finally, brothers and sisters, rejoice. Become mature, be encouraged, be of the same mind, be at peace, and the God of love and peace will be with you.” (2 Corinthians 13:11, CSB)

The love of God results in the joy of God, which releases the peace of God.

“Don’t worry about anything, but in everything, through prayer and petition with thanksgiving, present your requests to God. And the peace of God, which surpasses all understanding, will guard your hearts and minds in Christ Jesus.” (Philippians 4:6–7, CSB)

A person whose cancer has been arrested may say, “I am so thankful to God.” That is praise. But a person who is dying of cancer and in pain may calmly say, “Everything is all right. The Lord doesn’t make mistakes. I have peace in my heart.” That is “the peace that passes all understanding.”3

Warren Wiersbe makes the observation, “The ability to calm your soul and wait before God is one of the most difficult things in the Christian life. Our old nature is restless…the world around us is frantically in a hurry. But a restless heart usually leads to a reckless life.”4

Only the inner peace of Jesus can help me deal with the outer conflict in the world. But sitting around listening to calm music isn’t the best way to establish inner peace. You can’t sit around feeling at peace when your soul is hungry. You need to feed the peace in your life. That can only come from feeding yourself from the Word of God.

Enlighten yourself with God’s Word

“How happy is the one who does not walk in the advice of the wicked or stand in the pathway with sinners or sit in the company of mockers! Instead, his delight is in the Lord’s instruction, and he meditates on it day and night.” (Psalm 1:1–2, CSB)

The Bible is my prayer book. The Word of God is my guide to peace. The psalms are a great set of prayers that God wants me to use. Peace comes from the Word of God. Peace is not found in self-help books. They do not contain the spiritual power that leads to peace. Only the Spirit of God, who transmits the Word of God can bring the peace of God.

Picture a massive hurricane raging over the ocean. On the surface of the sea the violent winds whip the water into giant waves and create a scene of havoc and chaos. Yet, a mere twenty-five feet below the surface, the waters are clear and calm. The fish there go on living their lives totally unaware of the thunderous tumult just above them. When there is “depth,” there is peace. So it is in the Christian life.5

Accept peace as an alternative to war

“What is the source of wars and fights among you? Don’t they come from your passions that wage war within you?” (James 4:1, CSB)

Think about their first children. Cain killed his brother. What does God tell Cain?

“And Abel also presented an offering—some of the firstborn of his flock and their fat portions. The Lord had regard for Abel and his offering, but he did not have regard for Cain and his offering. Cain was furious, and he looked despondent. Then the Lord said to Cain, “Why are you furious? And why do you look despondent? If you do what is right, won’t you be accepted? But if you do not do what is right, sin is crouching at the door. Its desire is for you, but you must rule over it.” Cain said to his brother Abel, “Let’s go out to the field.” And while they were in the field, Cain attacked his brother Abel and killed him.” (Genesis 4:4–8, CSB)

Where did Cain learn this behavior? I think he learned it in a home that had little peace.

“But he gives greater grace. Therefore he says: God resists the proud, but gives grace to the humble. Therefore, submit to God. Resist the devil, and he will flee from you.” (James 4:6–7, CSB)

The devil is always encouraging you to fight and war with yourself and others. He is a divider, not a uniter. But we play a part in that. We get proud and pride prevents peace.

Some people just want to see the world burn. They want to just see relationships destroyed. They are just so selfish that they don’t care about having peace. Watching drama unfold is a better alternative to peace.

Some people want the drama because they are proud and they want all of the attention, even if it is negative attention. So conflict is better than peace because conflict means that you are paying attention to me. The devil’s corn is conflict. You have to stop eating it.

The Holy Spirit on the other hand, wants me to develop peace in my life.

“making every effort to keep the unity of the Spirit through the bond of peace.” (Ephesians 4:3, CSB)

He wants me to make every effort to keep unity through peace. This is why I should be involved in contributing to peace.

Cultivate peace with others

“And the fruit of righteousness is sown in peace by those who cultivate peace.” (James 3:18, CSB)

“Salt is good, but if the salt should lose its flavor, how can you season it? Have salt among yourselves, and be at peace with one another.”” (Mark 9:50, CSB)

When I try to sow the seeds of peace, I will see the fruit of that work. That becomes a peaceful world. But you have to look forward to having that peace. It is needs to be a goal.

Embrace a peaceful world around you

“making every effort to keep the unity of the Spirit through the bond of peace.” (Ephesians 4:3, CSB)

“When a person’s ways please the Lord, he makes even his enemies to be at peace with him.” (Proverbs 16:7, CSB)

“Pursue the well-being of the city I have deported you to. Pray to the Lord on its behalf, for when it thrives, you will thrive.”” (Jeremiah 29:7, CSB)

Jesus envisioned a world where peace would reign. He is known as the Prince of Peace. He encouraged others to make peace:

“Blessed are the peacemakers, for they will be called sons of God.” (Matthew 5:9, CSB)

I need to accept peace an an alternative to war. I should cultivate peace with others. However, if I want to really follow the Spirit’s peace plan, I need to envision a peaceful world around me.

I don’t just pray for peace. I pursue it. I need to enforce peace in my world. I don’t let conflict spread and continue. I maintain that peace with others. I need to make peace with others a priority. At some point in my life, fighting isn’t worth the fight. I realize that I won’t win in the end, and so it matters more to encourage one another and develop peace, than it does to win the argument.

Alfred Nobel, a Swedish physicist, created dynamite. His intentions were awesome when he created dynamite. He wanted to create an explosive that could move rock to build roads and get things out of the way to build buildings. He wanted to create a force that was powerful and that would make life better. The problem is that people took his creation and used it for destructive purposes—to kill people and to make war. So depressed was Mr. Nobel that his good invention was being used in a wrong, destructive way, he took nine million dollars, put it in an account, and began to award people for promoting peace. We call it the Nobel Peace Prize. What motivated him was the fact that what he intended for good was being used for wrong. He wanted to award those who were doing what his intentions were. When these people get the award, they become internationally known as Nobel Peace Prize winners. They are called by that name because they make peace instead of making war. God is looking for some Nobel Peace Prize winners—some folks He can bless and award because instead of making war, they’re making peace using His method that includes the blood of Christ.6

Photo by Sunyu on Unsplash 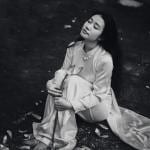 November 4, 2019
How to Development Contentment in My Life
Next Post 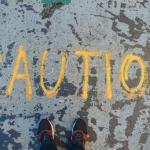 November 7, 2019 The Christian Responsibility to Warn Others
Browse Our Archives
get the latest from
Jim Erwin
Sign up for our newsletter
POPULAR AT PATHEOS Evangelical
1

Running Your Business to the Glory of God
In her article How ‘Christian’ Should My Small Business Be?, Laura Baxter offers...
view all Evangelical blogs
Copyright 2008-2020, Patheos. All rights reserved.