The Improbable is the New Normal

The Internet is exposing us to massive quantities of things that are amazing and improbably, says Kevin Kelly. And that might just be changing our culture:

The internets are also brimming with improbable feats of performance — someone who can run up a side of a building, or slide down suburban roof tops, or stack up cups faster than you can blink. Not just humans, but pets open doors, ride scooters, and paint pictures. The improbable also includes extraordinary levels of super human achievements: people doing astonishing memory tasks, or imitating all the accents of the world. In these extreme feats we see the super in humans.

Every minute a new impossible thing is uploaded to the internet and that improbable event becomes just one of hundreds of extraordinary events that we’ll see or hear about today. The internet is like a lens which focuses the extraordinary into a beam, and that beam has become our illumination. It compresses the unlikely into a small viewable band of everyday-ness. As long as we are online – which is almost all day many days — we are illuminated by this compressed extraordinariness. It is the new normal.

That light of super-ness changes us. We no longer want mere presentations, we want the best, greatest, the most extraordinary presenters alive, as in TED. We don’t want to watch people playing games, we want to watch the highlights of the highlights, the most amazing moves, catches, runs, shots, and kicks, each one more remarkable and improbable than the other.

January 14, 2013 Why Australia's Aborigines Represents One of the Great Experiments in Human Thought
Recent Comments
0 | Leave a Comment
Browse Our Archives
Follow Us!

Evangelical
Do Astronauts Have Internet in Space?
Joe Carter 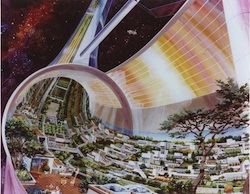 Vocation and the Epidemic
The coronavirus epidemic throws the doctrine of vocation into high relief: not...
view all Evangelical blogs
What Are Your Thoughts?leave a comment
Copyright 2008-2020, Patheos. All rights reserved.