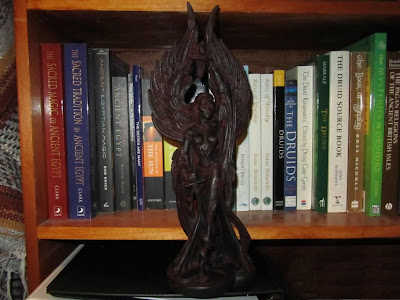 No, I haven’t disappeared.  But both work and home life have been busy, and what little free time I’ve had has gone to reading Dark Green Religion by Bron Taylor.  I’ve seen it mentioned several times and wanted to read it for myself.  It’s excellent and I’ll have much to say about it, but I want to finish the book first and at the rate things are going, that will be sometime this weekend.

On Monday, Chad Clifton had this blog entry titled Idolatry as a Category in Pagan Studies.  He questions whether “idolatry” is a useful term for Pagans to adopts, seeing as how it has such a negative connotation in the Abrahamic religions.  He quotes a PhD candidate who recommends “materiality” as an alternative.

Personally, I don’t think of physical images as “idols,” even though strictly speaking that’s exactly what they are.  I think of them as icons, a term that while also loaded with Christian baggage, has enough contemporary non-religious usage to make it useful in a Pagan setting.  The statues I have help me to focus my attention on the deities they represent.  They also remind me that they are individual beings and not merely “aspects” of one God/dess.

As I’ve mentioned before, I’ve been working with the Morrigan a lot lately – more from her insistence than from my requests.  I already have statutes of Danu and Cernunnos – last week, Morrigan let me know I should have one of her as well.

So now I do.  And the timing is… curious.

Blessed be the Morrigan, Queen of Phantoms, Lady of Sovereignty, and for me, Divine Teacher.