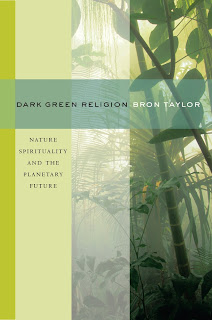 Dark Green Religion is a study of the relatively new religious trend toward viewing the Earth as sacred and acting accordingly. It’s written by Bron Taylor, Professor of Religion and Nature at the University of Florida. I highly recommend it for those interested contemporary nature religions and their origins.

Taylor begins with a cursory definition of religion, but he sees little value in arguing about where to draw lines between religion, parareligion, and religious behavior by those who don’t consider themselves religious. He coined the term “dark green religion” and defines it as “one where nature is sacred, has intrinsic value, and is therefore due reverent care.” He does this to draw a distinction between those who care for the Earth because it has value of its own and those who do so out of a sense of religious obligation like stewardship.

While dark green religion has its oldest roots in the beliefs and practices of indigenous peoples, Taylor begins his historical narrative with the colonization of North America by Europeans. Both the land and the native people were far more “savage” than in Europe, striking the early settlers with fear – as well with as a sense of wonder and awe, that most ancient religious impulse. It began to be expressed in the 19th century with the writings of Ralph Waldo Emerson, Henry David Thoreau, John Muir, and John Burroughs.

Taylor includes this quote from Burroughs: “The forms and creeds of religion change, but the sentiment of religion – the wonder and reverence and love we feel in the presence of the inscrutable universe – persists… If we do not go to church so much as did our fathers, we go to the woods much more, and are much more inclined to make a temple of them than they were.”

In Thoreau, Taylor finds “themes that would become common in dark green religion,” including a life that is undomesticated and free, finding wisdom in nature, connecting laws of nature to justice, an ecocentric moral philosophy, and the interconnectedness of nature and a loyalty to it.

Amidst all the history and philosophy one overriding theme emerges, which to me is still best expressed in the speech attributed to Chief Seattle and quoted in this book:

We know the sap which courses through the trees as we know the blood that courses through our veins. We are part of the earth and it is part of us. The perfumed flowers are our sisters. The bear, the deer, the great eagle, these are our brothers. The rocky crests, the dew in the meadow, the body heat of the pony, and man all belong to the same family.

Given the environmental crises of climate change and unsustainable human population growth, Taylor wonders if dark green religion can become a civic religion for our times. The foundation is in place – he points to green themes in arts and entertainment and to increased environmental consciousness in individuals and even in corporations (I’ve worked for medium to large corporations my entire career – not all of them are soul-sucking bastions of evil). Such a civic religion would “underpin the social norms and behaviors of restraint that are necessary to achieve a sustainable society … providing a system of meaning that can span generations and foster a sense of transgenerational communal identity.” It is clearly possible, but Taylor does not speculate on its probability.

Taylor chose the term “dark” intentionally. Part of this was to emphasize the “deep green” feelings and commitment many have toward Nature. But another part was to acknowledge the shadow side of this trend – those whose love of Nature causes them to act in radical ways (frequently called “environmental extremists” by the politically conservative media) and those who are frightened by its philosophical differences with orthodox Western monotheism.

He thinks the risks are relatively low. While every religion has unbalanced extremists, “the main themes of dark green religion – which include the idea that all living things have intrinsic value – do not easily lend themselves to indifference to human suffering, let alone to virulent streams of religious, ethnic, or territory-based hatred.”

And while “most traditional religions could become green” – something already happening in many churches – Taylor concludes that orthodox theologies, doctrines, creeds and communities are “unlikely to wither away.”

Taylor ends the books with his personal coda. He says:

Even though I am a naturalist, in the absence of any compelling explanation for the universe as a whole or the life that is in and around me on this little blue planet, I can think of no better term than ‘miracle’ to describe all I perceive. Even the bizarre fact that I am here to perceive it, reflect on it, and share my musing strikes me as nothing less than miraculous … What I have been long looking for is a sensible religion, one that is rationally defensible as well as socially powerful enough to save us from our least-sensible selves.

He concludes, very simply and very humbly, that “dark green religion is a reasonable candidate.” 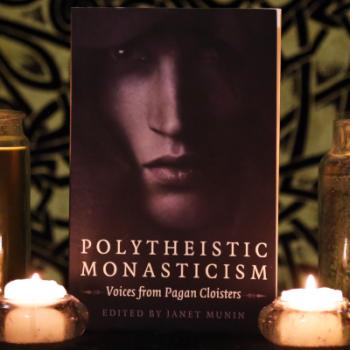 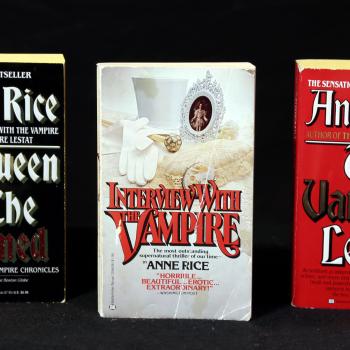