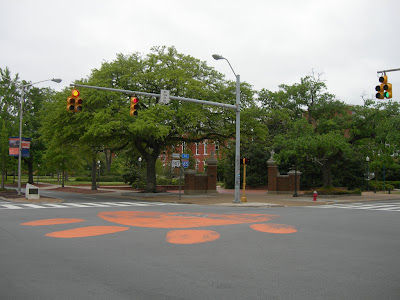 One of the reasons I’m a Druid is my love of trees. I grew up with woods literally right outside my back door and I spent countless hours exploring them. Over the years I’ve come to understand that trees are more than just big majestic plants – they’re living, breathing, spiritual beings. If you can sit still and listen you can learn a lot from a tree.

And that makes this story all the more disgusting. Someone has poisoned 130-year-old oak trees on the campus of Auburn University. Efforts to save the trees are underway, but given the concentration of the “tree herbicide” it may be all they can do to keep the poison from spreading to other locations.

Auburn is a big school in a tiny town in eastern Alabama best known for their football program, which won the National Championship this past season. “Toomer’s Corner” is a popular gathering place, and there is a long tradition of covering the trees in toilet paper following big wins. I know, it sounds silly to me too, but it’s harmless and fun.

According to the Atlanta Journal-Constitution, the poisoner is a University of Alabama fan upset because Auburn students “rolled the trees” when legendary Alabama coach Bear Bryant died – 30 years ago.

I’m from Tennessee – I grew up in this environment. People in other parts of the country don’t understand the passion the Southeast has for college football (Texas thinks they do, but they don’t). It’s not just people who went to a particular school or whose kids go there – it’s everyone. It’s been said that when a child is born in the state of Alabama, he or she has to immediately declare for Ford or Chevy and for Auburn or Alabama and those tribal identities are fixed for the rest of his or her life.

It would be easy to blame this incident on misplaced priorities and on the violent nature of football. That may explain why these particular trees were attacked, but it doesn’t explain why this person did something so heinous. This wasn’t the act of a hardcore fan or crazy fan – this was the act of a sociopath. AJC Sports columnist Mark Bradley puts it this way: “People get excited about football in the South. Sometimes excited people do silly things. The poisoning of trees goes beyond silliness. The poisoning of trees is, to use a word I don’t use lightly, evil.”

A 62-year-old man from Dadeville, Alabama has been arrested and will be charged with criminal mischief, which isn’t nearly a strong enough charge, but is probably all that can be done under the law. Hopefully the state of Alabama will release a few non-violent drug offenders and make room in their prisons for him. The next time he gets upset he may decide to kill a bird, or a dog, or a person. My prayer is that he is constrained from harming any more living creatures.

And my prayer is also that these trees that are older than any living human can be saved, but if they can’t, that their spirits will pass peacefully to the Otherworld. 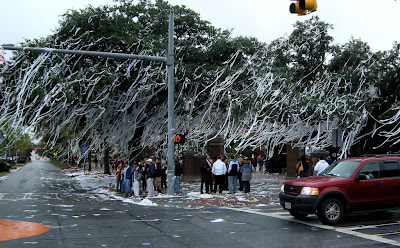