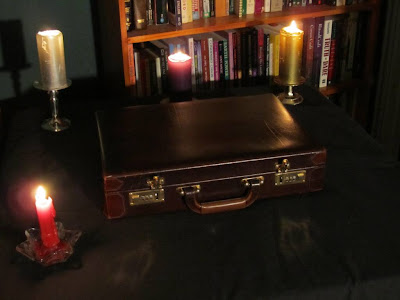 Anne Hill at Blog o’ Gnosis has an interesting piece up called “Does Your Religion Pass the Briefcase Test?” It’s inspired by a story about Scientology and some absurd levels of secrecy:

When you reach an exalted level of Scientology, you bring your own locked briefcase to a desk, someone puts a few sheets of paper into it, you go to a secure room, unlock the briefcase, and then you can read these documents—once—before returning them the same way.

I have no experience with Scientology. Based on what little I’ve read about it, it strikes me as a “religion of me” carried to great extremes. But neither Anne’s post nor mine are about Scientology – they’re about secrecy in religion. And like Anne, I’m extremely skeptical when it comes to most claims for religious secrecy.

The lure of secrets is great. As kids, whenever someone would say “you wanna know a secret?” our reaction was “tellme tellme tellme!!!” We want to be in the in-crowd, we want to be special… and some of us just want to know everything we can – knowledge is power, after all. When there’s a secret we don’t know, we frequently assume the people keeping it are up to no good.

In this era of the Internet and Amazon, there are no occult secrets. There are only ineffable mysteries, things that must be experienced first-hand because words cannot describe them.

There is a place for secrecy in religion, albeit a very small place. Most initiation rituals are kept secret to maintain an element of surprise for those participating in them, particularly if the rituals include an ordeal. Secrecy allows a candidate to make herself open and vulnerable, because she knows whatever she experiences won’t be shared with anyone who hasn’t had the same experience.

Some acts of worship are so sacred they are guarded to insure they are not profaned – made ordinary – by those who don’t appreciate their history and meaning.

There is also a place for progressive learning. In my own Druid order, you don’t get to see the Ovate material until you complete the Bardic grade, and you don’t get to see the Druid material until you complete the Ovate grade. Having completed all three grades, I can assure you there are no Great Occult Secrets in any of them. But it really helps to establish a strong spiritual base in the Bardic grade before tackling the more challenging Ovate lessons.

These are legitimate uses of secrecy. But some groups use secrecy to sink their hooks into members: “keep working, keep giving us money and we’ll show you something really cool!” Some use it to hide their misdeeds – think of the Catholic hierarchy covering up child sex abuse by some priests. And some folks just like to pretend they’re important because they know something – no matter how inconsequential – that other folks don’t. For them, the attraction isn’t what’s in the locked briefcase, it’s the fact that the briefcase was opened for them.

One more time – there are no occult secrets. There are only ineffable mysteries. If your teachers don’t understand this, walk away. If they do understand but still hold out a locked briefcase like a carrot, run.