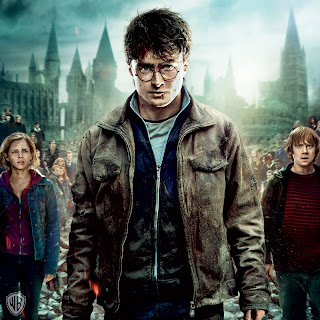 I first heard of Harry Potter when a young woman who worked for me said she was going to a release party for a children’s book. The young woman was quite immature and totally unprepared for the business world – thankfully, she quit before I had to fire her. In my mind “Harry Potter” was associated with “children’s book” and “silly girl who needs to grow up” – not a combination likely to get me to read it.

Shortly after that, in the middle of 2001, I started hearing buzz about the upcoming movie Harry Potter and the Sorcerer’s Stone. All of the articles referred to the books, how good they were, and how they were inspiring children to read. I knew I was going to have to see the movie, and if I was going to see the movie I wanted to read the book first.

If I didn’t read Sorcerer’s Stone in one sitting it wasn’t many more – if that was a children’s book then it was the kind of book I liked to read as a child. The characters were real, the magic was believable (in the “suspension of disbelief” fictional sense), and the story had a lot I could relate to even as I was getting close to turning 40. I read Chamber of Secrets and Prisoner of Azkaban in the next couple of weeks, then Goblet of Fire after I decided I wasn’t waiting on the paperback. I was hooked.

While waiting for the final three books I had a lot of discussions with other Harry Potter fans (and some enemies) about the books. Some thought they were Pagan, some thought they were Christian – I thought they represented a retelling of universal myths. I have to admit I was a little disappointed when Deathly Hallows came out and it was clear that J.K. Rowling intended it as a Christian story. I wanted Harry for myself – I wanted him to be part of my universalist tribe. I had to be satisfied with the fact that the Christian elements in Harry Potter represented the best of Christianity: the power of love and the willingness to sacrifice for the greater good.

The books weren’t perfect. Subplots came and went (whatever happened to SPEW?), Harry’s teenage angst in the first third of Order of the Phoenix was painful to read, and the forest wanderings in the first part of Deathly Hallows bordered on boring. But those were the exceptions.

I chuckled when I read fundamentalist rants claiming that Harry Potter was going to spawn a generation of witches. I’ve been involved in CUUPS for eight years now – I’m still waiting for the first person to come to one of our circles or send me an e-mail and say “I’m here because of Harry Potter.” I could tell the difference between fantasy and reality when I was a kid – I’m pretty sure this generation can too.

I’ve had ten years of wonderful entertainment and inspiration. I hate to see it come to an end, but all things do, eventually – and here’s hoping J.K. Rowling has sense enough to leave near-perfection alone and NOT write any more.

I want to end with my favorite quote from Deathly Hallows – if you’ve neither read the book nor seen the movie, you should stop reading here.

From the chapter “King’s Cross”

“Tell me one last thing,” said Harry. “Is this real? Or has this been happening inside my head?”
Dumbledore beamed at him, and his voice sounded loud and strong in Harry’s ears even though the bright mist was descending again, obscuring his figure.
“Of course it is happening inside your head, Harry, but why on earth should that mean that it is not real?”

It’s all been very real indeed.