The Book of Druidry 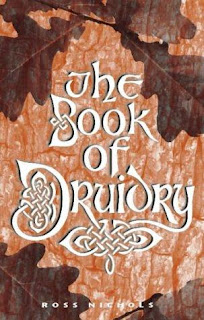 The Book of Druidry is a classic text by Ross Nichols (1902 – 1975), the founder of the Order of Bards, Ovates and Druids. The book was written in segments by Nichols over the course of his life. He finished it just before he died, but the manuscript was thought to be lost until 1984 when current OBOD Chosen Chief Philip Carr-Gomm collected the pieces and had it published.

In the forward, Philip Carr-Gomm says that in The Book of Druidry, “Ross managed to combine three books in one: a history of Druidry, a guide to certain ancient sites, and an anthology of Druid wisdom.”

As an anthology of Druid wisdom, it is superb. While revival Druidry has been around since the 18th century, its leaders didn’t do a particularly good job of documenting their teachings. Part of that is because the early Druid groups were fraternal orders and part is no doubt due to the ancient Druid tradition of keeping lore orally and not in written form. The Book of Druidry is the best widely-available source for what these groups taught, and much of the material was used for the first OBOD training program.

The guide to ancient sites (Stonehenge, Avebury, Rollright, etc.) is a tough read. Some of Nichols’ history and interpretation is accurate (and some of his speculation was very good), but our knowledge of these sites has grown and been refined in the 40+ years since this was written. Additionally, he goes into a deep numerological analysis of these sites. I don’t completely discount numerology as a method of divination and understanding, but it doesn’t really grab me.

The history is problematic. At times Nichols makes definitive statements that simply can’t be verified. For example, he says the first modern Druid organization was formed by John Toland in 1717 and he lists an unbroken line of Chosen Chiefs from Toland to himself. Writing about this in Blood and Mistletoe, historian Ronald Hutton says “If the version of developments presented by Nichols and the Universal Bond is treated as an esoteric teaching, by which major truths are offered in a concealed form, then it embodies much demonstrable history. Only if it is treated as a literal statement of fact are there problems with it.”

The Book of Druidry is a book of esoteric teachings in the Druid tradition. As such it is invaluable. It is also an excellent picture of what revival Druids thought and did. If you are a Druid, you really need to read this book.

But if you are exploring Druidry or just starting out on a Druid path, you may want to leave The Book of Druidry till later. Start out with Druid Mysteries by Philip Carr-Gomm of OBOD, The Druidry Handbook by John Michael Greer of AODA, and The Druids: A History by Ronald Hutton. When you’ve digested these, and when you’ve got a year or two of practice under your belt, then go back and pick up The Book of Druidry. I read it in 2002 when I was just getting serious about Druidry and I really struggled with it. I finished rereading it earlier this month and it made much more sense this time.

But it was still no light reading. At the end of his introduction, Philip Carr-Gomm quotes William Blake, who said “the wisest of the Ancients considered what is not too explicit as the fittest for instruction, because it rouses the faculties to act.” Sometimes we need to be reminded that learning is about more than absorbing information.

The Book of Druidry is a treasure and I encourage all Druids to read it, eventually if not at first.