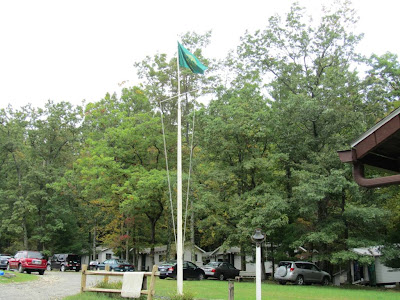 Did I mention that it rained all day Friday? It’s been so dry in Texas I’ve forgotten what those days are like.

This is the second year for the East Coast Gathering. Those who were there last year say it was 90 degrees and sunny the whole time. Apparently Texas isn’t the only place with some fickle weather.

As with the House of Danu Gorsedds I attended in 2009 and 2010, this was a chance to spend a few days immersed in Druidry. The combination of rituals, workshops, fellowship and a beautiful natural setting were a great way to relax and see what Druidry can be.

I’ve explained Paganism enough times I’m pretty comfortable doing it as an “elevator speech,” but at times I’ve struggled to define Druidry. “The revival of ancient Celtic beliefs and practices, reimagined for the 21st century Western world” is accurate, but doesn’t really convey the depth and meaning Druidry has for me. Thea Worthington offered this definition that I really like: “Druidry is the art of wild wisdom.” It’s the spirituality Nature teaches us, if only we’ll slow down, go outside, and listen.

The rain stopped on Saturday and by Saturday night we were able to have a Gorsedd around a roaring fire. The children (and a few adults) presented a condensed version of The Tale of Gwion Bach, followed by music, storytelling, and firespinning. Arthur Billington was amazing on the guitar – his knowledge of and skill with American folk and blues is outstanding.

Special thanks to Lorraine Soria, who not only organized the event but also served as chief cook. She – and others – worked most of the weekend so the rest of us could go to workshops and socialize.  I said it there and I’ll say it again here:  thank you, Lorraine.

Thanks also to Lorraine and the other Druids for giving me a key part in the Druid grade initiations. If they had let me pick a part, that’s the one I would have wanted. It was a honor to help bring three people into the Druid grade. It was also an honor to help bring nine people into the Bardic grade. May their studies and practice bring them greater wisdom, and may that wisdom bring them to greater service.

The East Coast Druids are planning another gathering next year, from September 20 through 23. A lot can happen in a year, but it’s on my calendar and I hope to be there again.

September 27, 2011 Immersion
Recent Comments
0 | Leave a Comment
"They are persons. How do you develop emotional relationships with other kinds of persons?"
MadGastronomer Working With Many Gods
"These things come in their own time. My suggestion would be to maintain the usual ..."
John Beckett Working With Many Gods
"So glad you wrote this article as I had actually come to ask about relationships ..."
Samuel Ellis-Martin Working With Many Gods
"Great, thoughtful article. Thank you for addressing this important (and touchy!) topic.There’s an excellent popular ..."
Michelle Gruben Why Are Pagan Groups Cash-Poor?
Browse Our Archives
get the latest from
John Beckett
Sign up for our newsletter
POPULAR AT PATHEOS Pagan
1