Hoofprints in the Wildwood 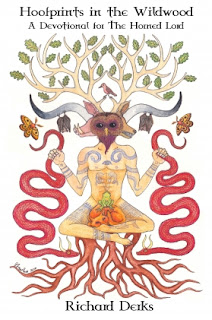 And he is calling followers here and now. They are men and women; gay, straight, and bisexual; from America and Europe and Australia.

Hoofprints in the Wildwood, edited by Richard Derks, is a collection of devotions made by those followers. It’s a small book: 188 pages featuring 55 offerings by 30 contributors. The offerings include poetry, essays, rituals, personal narratives and artwork. It’s available as an ebook for $5.99 or as a printed book for $14.50 through Lulu’s print on demand service.

As you might expect from such a wide assortment of contributors, the entries are a mixed bag. Some are excellent, most are good and a few left me scratching my head. But even the most derivative of the offerings have something important – passion.

I’ve come across some of these writers on the internet, but as far as I know none of them are “professional Pagans.” These aren’t people who make their living studying religion or even teaching religion. They’re people who do religion. Reading their work makes me want to do religion too.

My favorite entry is “My God” by Juniper. It’s the very intimate story of how she came to be called by Cernunnos and the impact he’s had on her life. Her experience with Cernunnos is very different from mine, but I can easily see the same deity working in both cases, personalizing his approach to two rather different people. Juniper has a longer piece on the history of the Horned God on No Unsacred Place – it’s the first of a multipart series and is very much worth your time to read.

Hoofprints in the Wildwood is what its subtitle says it is: “A Devotional for The Horned Lord.” Although you could read it in one sitting, it’s best read in a devotional setting: read 10-15 minutes, meditate on what you’ve read, then make your own offerings. Maybe you read one of the poems out loud. Maybe you perform one of the rituals. Maybe you sing or dance. Maybe you simply close your eyes or gaze into the trees and speak what’s on your heart.

But be warned – the Horned God is not someone to approach with trivialities. Your ego and your comfort aren’t too high on the priority list of a god who is both Hunter and Hunted. He has more urgent, more important matters to deal with. He is not cruel, though he can be harsh. Several of the writers’ experiences match my own – the Horned God can be loving and patient and nurturing. But he wants what he wants and he needs what he needs – passionately.

If you are a priest, priestess, devotee or follower of any of the Horned Gods, or if you just want to see what Pagan religious devotion looks like, I recommend Hoofprints in the Wildwood.

November 15, 2011
Meeting the Spirits of the Land
Next Post

November 18, 2011 Know Your Limitations
Recent Comments
0 | Leave a Comment
"It's kinda like journeying out into a more or less wild area and coming upon ..."
Pitch313 Connecting to Gods for Whom There ..."
"Genius idea! It's like saying, "You're welcome to study this path, but we're not gonna ..."
Amanda Ingalls How to Break Spiritual Ties that ..."
"I remember very clearly my grandmother saying to me, "Where did we go wrong?" Before ..."
Amanda Ingalls How to Break Spiritual Ties that ..."
"I am thankful I got to witness a female monarch butterfly hitting up every common ..."
Amanda Ingalls 5 Things I’m Thankful For This ..."
Browse Our Archives
get the latest updates from
John Beckett
and the Patheos
Pagan
Channel
POPULAR AT PATHEOS Pagan
1