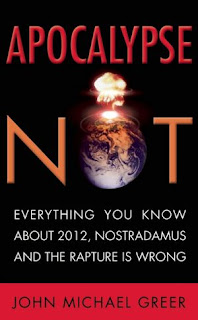 Not all my vacation was spent visiting temples – I also did more reading than I’ve done in months. Long flights and evenings of rest following hours of hiking over ancient ruins present an opportunity to read that I don’t get enough of during “normal” times.

One of the books I put on my Kindle was AODA Archdruid John Michael Greer’s new Apocalypse Not, subtitled Everything You Know About 2012, Nostradamus and the Rapture Is Wrong. Although it covers the supposed end of the Mayan “long count” calendar, it’s not really about what will or won’t happen at this year’s Winter Solstice. Instead, it’s a rather detailed history of the apocalypse meme: how it originated, how it has manifest itself countless times over the past 3500 years, and why it persists despite the embarrassing and sometimes fatal results it has for those who accept it.

You won’t find an apocalypse in polytheistic religions, because polytheistic religions don’t need them. They may have eras and epochs which begin and end, but these are normal cycles of life. Apocalyptic thinking is a product of monotheism and is a direct response to theodicy – the Problem of Evil. If there is one God who is all-good and all-powerful, why does evil exist? Monotheists have invented several explanations (the Fall of Man, free will, etc.), none of which are completely satisfying.

The first occurrence of the apocalypse meme was in the first widespread monotheistic religion, Zoroastrianism, between 1500 and 1200 BCE. According to Greer,

Zarathustra studied as an apprentice priest. Around the time he turned twenty [he] experienced a shattering vision in which Ahura Mazda, “Lord Wisdom,” the only true god, appeared to him. Against the power of Ahura Mazda and his Holy Immortals were ranged Angra Mainyu, the Spirit of the Lie, and a host of demons who were mostly borrowed from the older Iranian gods.

That struggle … would come to an end sometime in the not too distant future with the final defeat of Angra Mainyu and the power of the Lie. All sorrow, suffering, illness, and death would end forever, the dead would come back to life, and faithful believers in Zarathustra’s teaching would enter into an eternity of bliss, while those who rejected the true faith would be forced to wade through torrents of molten metal and the like.

Evil, then, was only a temporary condition. Eventually Good would triumph over Evil, all would be made right and scores would be settled. It was a very attractive promise and it found its way into other cultures and other religions.

Jewish apocalyptic thinking began with the Book of Daniel. It is set in the Babylonian Captivity, but it is likely to have been written as propaganda during the revolt of the Maccabees against the Greeks. It borrowed from Zoroastrianism and predicted the rise of a Messiah who would set up a Jewish kingdom. The apocalypse meme drove rebellion against Rome, a rebellion which was brutally crushed in 70 CE. The result was the Diaspora – Jews scattered to the corners of the world. Would-be messiahs have arisen periodically in Judaism ever since.

The meme carried over into Christianity with the Book of Revelation: “the last and weirdest book of the Bible.” But when you get past the bizarre visions of Revelation, Greer says the message is clear: the author (traditionally presumed to be the Apostle John, but impossible to determine with any certainty) was predicting the fall of the very Roman empire which was persecuting the new Christian religion.

The astonishing detail is that he was right. The Roman Empire was, in fact, ravaged by epidemics and earthquakes in the three centuries between John’s vision and the fall of Rome. The terrifying horsemen showed up on schedule – historians call them the Huns. For a thousand years after the Christianization of the Roman Empire, Christianity was the unchallenged faith of the Western world.

John’s vision counts as one of the most spectacularly successful prophecies on record. Thus it’s all the more telling that only a small minority of Christians have ever accepted that they have already come true.

The prophecy is simply too enticing and too useful to give up. The Rapture – the return of Jesus – coming soon has been predicted since the beginning of Christianity. Early Christians expected not to die. Hilarian, a bishop in North Africa, wrote in 397 CE “Ponder how close these coming fearful events are!”

The villain of Revelation – the Antichrist – is a wonderful projection for your enemies. Various kings, emperors and popes have been labeled Antichrist since the Middle Ages. And if your enemy is the Antichrist, then the Rapture can’t be far behind. Greer details many of the predictions of the Rapture throughout history – and how every single one of them have been wrong.

A variation on the apocalypse theme are utopian fantasies, where some great change will happen and the world (or at least part of it) will live in peace and prosperity forever. The 1960s promised the Age of Aquarius, Karl Marx promised the withering away of the state, various UFO cults have promised either transformative knowledge or escape on a spaceship for true believers. Their track records aren’t pretty.

If the results of the apocalypse meme are so harmful to its followers, why does it persist? Because it while it ultimately fails – always – it offers an immediate payoff: hope. Your life sucks? It will all be better after Jesus returns. People abusing you? They’ll get what’s coming to them. All those other prophecies that were wrong? Don’t worry about them – we’ve got the direct line to God they didn’t have.

If you’re curious about how this meme started and grew, if you’ve got the slightest worry about 2012, or if, like me, Rapture prophecies once tormented you with fears of being “left behind,” I encourage you to read Apocalypse Not.

And then start working to build a better world right here right now. That’s the only way we’re ever going to get there.