Fat and Athletes and Expectations

Last week the Pagan internet exploded with posts on the issues of obesity, health, body image and the mainstream society’s impossible standards of attractiveness. It started with this well-meaning but ultimately insensitive post by Peter Dybing asking why we don’t talk about the relatively high percentage of Pagans who are obese. Star Foster logged in from her vacation to respond with “My Fat Is My Business.” Thorn Coyle wrote a very balanced piece that still managed to offend some when she indirectly described fat as a weakness. Many others added their comments to these posts or on their own blogs.

It’s taken me this long to figure out what I want to say about this, and even now I’m not sure if I should say anything at all. But I have some thoughts I want to share. I’m neither a victim nor a role model – this is just who and what and where I am.

I have another uncle (the youngest of his generation) who’s doing fine at 71 – he stopped smoking after college. There have been minimal heart problems among my generation – few of us smoke. It seems the legendary Beckett heart problems have more to do with cigarettes than with genetics or with Southern fried cooking.

I haven’t always been fat. I was usually an average weight as a child, or a little above. I gained and lost the same 30 pounds several times in my 20s. But at about age 30 I started gaining fairly steadily.

Until, motivated by an upcoming 20 year high school reunion and the desire to finally be an athlete, and facilitated by a move from a bad job in a bad location to a good job in a good location, I lost 40 pounds in 7 months and I started running.

Growing up I always felt like I was inferior because I wasn’t an athlete. I didn’t know how much of that feeling was internal and how much was external and I still don’t know for sure. I tried to play youth league baseball and football – I was short, slow, and I didn’t like being hit. It’s not self-deprecation to say I sucked. I played intramural, church league and industrial league softball for a while. I didn’t suck, but I wasn’t very good and it didn’t make me feel like an athlete.

Running changed all that. I still wasn’t very fast, but with amateur distance running you don’t have to be fast. You just have to keep going. I gradually stretched out from a mile to two to three. When I ran four miles for the first time in my life at the age of 36 I knew I was on to something. I went from exercising to training. I kept training logs. I bought running clothes. I started signing up for races. I was doing something “normal” people couldn’t (or wouldn’t) do. I was finally an athlete.

In 1999 I ran 20 to 40 miles per week. That November I ran the Chickamauga Battlefield Marathon in 3 hours and 58 minutes. I was thrilled, and I had dreams of qualifying for the Boston Marathon.

Over the next five years I kept running while I tried various combinations of rest, stretching, orthotics, medication and ice treatments. My mileage went down and my weight went up. I ran the Dallas White Rock Marathon in December 2003 in 4:20.

By then more than my right foot was hurting. I was constantly tired and I was tired of training. I kept cutting back and cutting back and my weight was creeping up. The last entry in my running log was a 7 mile run on September 19, 2004. I kept meaning to pick it up again, but I never did.

It appears my body wasn’t meant for running. I still have plantar fasciitis and I suspect I’ll have it for the rest of my life. I wear orthotic inserts in all my shoes, I ice my right foot every night, and I still occasionally need anti-inflammatory drugs. Some mornings I limp like I’m in a cast for 10 or 15 minutes until my tendons loosen up.

Yes, it was worth it.

Back to weight and fat. Look at the graph of my weight vs. age (yes, I’m a geek!). My eyes draw a straight line from the beginning of the graph to the point where it starts to level off at age 44. Whatever I lost through running came right back – the running had no long-term effect. But with the exception of a short-term spike last fall, for the last six years my weight has been pretty steady in the 205-210 range. 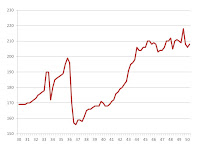 I still exercise regularly: 30 to 60 minutes a day, five or six times per week. Mainly I walk and I lift weights. I’m stronger than when I was running. I don’t have the endurance I did then, but in general I feel better – I don’t have the lingering fatigue that comes with distance training.

I have the same results with dieting most people do – success for a few days followed by a crash when I start craving sugar or pasta or a hunk of barely-cooked meat. I try to pay attention to what I eat, but I don’t obsess over it. “Spikes” happen when I don’t pay attention.

Is this where my body wants to be? Is this what I’m supposed to weigh? Am I banging my head against a brick wall worrying about my weight?

That pressure is going to get greater starting this Friday when the Summer Olympics begin. I’m not an Olympics junkie, but I’m married to one, and I like watching most of the sports. I will be in a combination of admiration, respect, envy and lust looking at all the beautiful bodies and watching the athletes compete. Celebrities don’t have much effect on me, but athletes do.

It shouldn’t matter. I know I don’t have the genes to look like that any more than I have the genes to play in the NBA. I know I had my moment of glory with athletics and my “career” wasn’t much shorter than many Olympic athletes. I know age will affect them just like it’s affected me.

I know I’m not looking for a mate. Cathy and I have been married for 24 years, we plan to continue being married, and size stopped being an issue in our relationship a long time ago.

I know all that. But there are still times when I feel like I have to lose weight, start running again and shape my body into something I know good and damn well it doesn’t want to be shaped into.

If I have these troubling feelings as a 50 year old man with no serious disabilities then how bad is it for others in less privileged situations? More importantly, how do we go about changing things so it stops being a problem for anyone?

How do we encourage ourselves and each other to be active, eat well, look after our bodies and our souls and accept that the results that come are what they’re supposed to be?

How do we build a society that supports healthy lifestyles and doesn’t force many of us into unhealthy choices because of poverty of money or poverty of time?

How do we build a culture – or at least, a subculture – that sees beauty in all body types? How can we be beautiful no matter what our body type?

How do we learn to admire the best without devaluing the ordinary?

I don’t have answers to those questions. But we need to find answers, one way or another.

July 26, 2012 Fat, Health and Society – A Pagan Approach
Recent Comments
1 Comment | Leave a Comment
"As someone who believes in reincarnation, I also tend to believe that once on the ..."
Sreyman77 Ancestor Work
"If anything, ancient Greeks and Romans arguably went perhaps a little too far in the ..."
Cardunculus Ancestor Work
"I think it's worth mentioning that the ancient Greeks built their religious beliefs on the ..."
Aelfrey Ancestor Work
"For me, it's easier to relate to my maternal grandfather's side which was Irish Catholic ..."
Brent Dannells Ancestor Work
Browse Our Archives
get the latest from
John Beckett
Sign up for our newsletter
POPULAR AT PATHEOS Pagan
1