Why do Pagans gather in circles? Why do we cast circles? What does the circle mean? In the wake of yesterday’s post on a circle that didn’t work out very well, I’d like to explore an area of Pagan practice that many do but few understand.

Gathering in circles. Circles are a very efficient shape – if you have a length of string and you wish to enclose the maximum possible area, arrange it in a perfect circle. Look at the tips of your fingers. Run your hand around your arm or leg. Look up at the Sun and the Moon. Circles and spheres are everywhere – they are natural, organic shapes and they’ve been part of our mental imagery since long before we were human.

The circle is also an organic arrangement for gathering. It gives everyone unblocked heat from a common fire. It allows everyone to see everyone and facilitates conversation. Like King Arthur’s Round Table, it promotes egalitarianism. The idea of gathering in circles is a very old, very natural, very pagan idea. While we can only guess at the purposes behind such ancient monuments as Stonehenge and Avebury, it is no surprise they are circular.

Early modern Pagans gathered in circles because it was the natural shape for a small group – form follows function. Over time, gathering in circles became orthopraxy – “proper practice.” It’s so common “circle” has become synonymous with “Pagan gathering.”

The circle pattern works very well with small groups. Everyone sees and speaks toward everyone else, everyone has direct access to the altar or fire or speaking / dancing area, and the idea of egalitarianism is reinforced.

But when you get beyond a certain size (about 30, in my experience), circles start to get unwieldy. It gets hard to hear across the circle, particularly if you’re outdoors and some of your speakers have soft voices. It gets hard to see what’s going on. If the altar is in the center, half the assembly will be looking at the leaders’ backs as they work. As more and more people come in, the circle can be expanded, but that requires more and more space – and makes the distance across the circle even greater.

In a public setting, a circle becomes even more problematic. Since all the participants are facing inward, those outside the circle can only see their backs, and what is going on inside the circle is obscured if not hidden. If you’re doing a private ritual in a public setting that may be a good thing. But if you’re trying to present your religious practices to the wider world, a circle is counterproductive.

Form should follow function, and if the function doesn’t work well with a circular gathering, use another form. The simplest thing to do is to form two concentric circles – a person in the outer circle can see and hear a lot better looking between the people in front of her than if she has to move back far enough to form one larger circle. If the ritual has a lot of altar work, put the altar in one quarter and form semicircles around it so everyone can see. If it’s primarily a presentation (such as our Egyptian Temple Ritual) put people in rows.

Unique activities and unique settings call for unique arrangements. Think through what you’re doing and select the arrangement best suited for your ritual. Form follows function.

Casting circles. I challenge you to search the lore of any ancient tradition and find any mention of circle casting. You will find cleansing and purification, and you will find delineation of boundaries. But the idea of constructing a barrier in preparation for religious or magical work originated with medieval sorcerers who were practicing in the context of Judaism, Christianity or Islam. [2013 edit:  Walter Burkert said the ancient Greeks drew a circle around their work space as part of ceremonies of sacrifice.  Presumably this was to delineate sacred space.  Perhaps the medieval sorcerers got the circle casting idea from the Greeks, but whether they did or didn’t, modern Pagans got our idea from the medieval sorcerers.]

Much of this sorcery involved conjuring demons to do the bidding of the sorcerer. Demons being dangerous creatures, the sorcerer would draw (with chalk or paint, not just with his mind) a triangle on the floor for the demon to appear in, then would seal himself within a circle of protection – usually a double or triple circle, with words of power and sacred names inscribed between the rings.

When the Mesopagans of the 19th and early 20th centuries begin to reconstruct magical practices, the medieval sorcerer (along with the witch) was one of the few role models they had available to them and circle casting made its way into modern practice.

So if you’re not conjuring demons why do you need to cast a circle?

The first answer I hear (and occasionally give) is “to create sacred space.” The counterargument to this is “isn’t all space sacred?” and “isn’t that supporting dualism?” Those concerns, while valid, misunderstand the concept of sacred space. Sacred space isn’t sacred because it’s somehow better than than ordinary space, it’s sacred because it’s set aside for our most important work. Creating sacred space says we will leave our ordinary concerns outside and focus entirely on why we’re here. It’s why you turn your phone off before the ritual starts.

In a temple, you know you’re in sacred space as soon as you step across the threshold – there is a clearly delineated boundary between the sacred and the ordinary. Modern Paganism (especially Wicca) was developed in living rooms – about the most ordinary space you can imagine. Some magical action was necessary to transform the ordinary to the sacred, and casting a circle is a quick and effective way of doing that. But it is not the only way. You can cense or smudge, you can set up a temporary physical boundary to cross, or you can simply declare “we consecrate this space and declare that it is sacred to this rite.”

Another reason for casting a circle is “to contain the energy until we’re ready to release it.” If your ritual goal is to raise a bunch of energy and then shoot it off like a cannon, that’s a legitimate reason. But I question the wisdom of doing that. Magic works best when it is very narrowly focused, when energy is sent like a laser to its target. Releasing energy “to the Universe” can be a spectacular event but it rarely yields significant results. I learned this lesson the hard way.

Another frequently given reason is “for protection.” Again, that’s a legitimate reason, but it raises the question “protection from what?” From discordant energies? That’s what the creation of sacred space is supposed to prevent. From human troublemakers? A good circle will help, but you’d better post sentries too. Or better yet, relocate the ritual. Or even better, talk to the supposed troublemakers and see if there really is a problem.

In a public setting, casting a circle creates a barrier where a barrier is likely to be unhelpful. It sends a signal to passersby to keep out. Rather than casting a circle, set up wards before the ritual begins. Charge them to allow in whatever you want in and keep out everything else. Or follow the practice of ADF and make an offering to the Outdwellers.

Casting a circle has become another form of orthopraxy. It can be a useful, meaningful part of Pagan ritual and I use it in most (though not all) of the rituals I lead. But it isn’t always necessary, and there are times when it is not appropriate. Cast circles mindfully, not mindlessly.

The meaning of the circle. Like any good story, the mythology of the circle has many interpretations. All of them are true – which one or ones is proper depends on the context. We’ve already talked about one – the equality of the participants. Others include unity and timelessness. 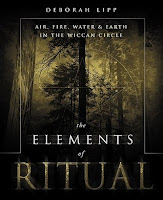 In her book The Elements of Ritual, Deborah Lipp argues that the basic Wiccan liturgy is a retelling of the creation of the Universe. Casting the circle creates space, consecrating the elements creates matter, and calling the quarters gives it direction. Read literally, it’s a stretch. Viewed mythically, it has meaning.

So if you’re planning a ritual, ask yourself “is retelling the creation of the Universe necessary for this ritual?” In nine years of leading public ritual, I’ve done one where yes, that was necessary. For the rest it was optional. You don’t have to cast a circle if it doesn’t work well in your particular setting.

Though they are intertwined in myth and practice, gathering in circles, casting circles, and the meaning of the circle are three separate issues. We need to understand the origins and legacies of each. When we do, we can mindfully select themes, forms and liturgies that will fit the settings and accomplish the goals of our rituals.

October 22, 2012
The Challenges of Large Public Rituals
Next Post

October 25, 2012 Politics, Magic and Your True Will
Recent Comments
2 Comments | Leave a Comment
"You went to Orkney? Cool beans! I have yet to visit Europe, but England, Scotland ..."
Amanda Ingalls Spiritual Practice on Vacation: If You ..."
"I did get to see some of it, but the darn clouds were in the ..."
Amanda Ingalls Hey Neil deGrasse Tyson: Let People ..."
"Yes, he can be a real party pooper. And that's not good because he's supposed ..."
rosewelsh44 Hey Neil deGrasse Tyson: Let People ..."
""It’s a deity merging Their being with yours (partially – otherwise we’d go insane from ..."
Sherlock Holmes 6 Ways to Talk to the ..."
Browse Our Archives
Related posts from John Beckett