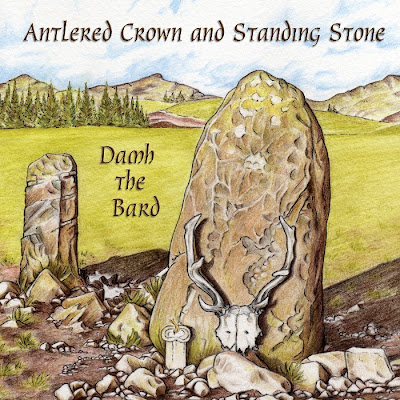 If you’re already a fan of Damh the Bard you don’t need to read this review. You know you want his new CD, you’re going to enjoy it, just go buy it. But if you want an opinion first, read on.

Antlered Crown and Standing Stone is Damh the Bard’s first studio album of new songs in four years. Since The Cauldron Born in 2008, Damh has released an album of traditional folk songs and a live album, and his music was the inspiration for The Spirit of Albion movie. What has four years given us? A pretty good album.

The title track is an anthem to the Horned God, someone Damh feels has been mistreated over the years – by Christians who misidentified him with Satan and by Pagans who ignored him in favor of the Goddess. Damh has tried to rectify this on previous albums with “Pipes of Pan,” “Noon on the Solstice,” and especially with “Green and Grey.” Those songs were ballads telling stories. “Antlered Crown and Standing Stone” is a worship song for the Horned God. If there was any doubt, Damh settled it in the “making of” video where he reverently said “he’s my man, and I’ll write songs for him till I die.” As far as I know, Damh the Bard has given the world its first Pagan worship song.

The worshipful tone continues through much of the album. “Brighid” is an anthem to both the Celtic goddess and the Christian saint. “Silent Moon” is the worship of the Moon and the Goddess of the Moon. And “The Dreaming” is Damh’s beautiful impression of his visit to Australia, complete with a didgeribone playing in the background.

“Sons and Daughters (of Robin Hood)” isn’t exactly a new song. It’s a political song Damh recorded and released last year in response to a proposal by the Conservative UK government to sell off England’s national forests, a proposal that was eventually abandoned. As an American I don’t recognize many of the events the song references, but according to Damh neither do many younger Britons – educating them is one of his goals for writing it.

This is a satire in the classic Druid sense of the term. But while it’s a good, intelligent satire it’s missing something: a [rabble] rousing chorus. What we have is “If you thought that we would do nothing, you’ve misunderstood. For we are the sons and daughters of Robin Hood.” It’s simply too soft and too brief to express the kind of defiance a protest song should inspire.

Damh’s website says “the album finishes with an 8 minute epic retelling of the story of Ceridwen and Taliesin.” That concerned me. This tale is very important in OBOD Druidry. I’ve told it many times and each person who tells it puts his or her own twist to it. I was afraid this would become an “official” version of the story.

Not to worry. This is a musical version of the story, not a spoken word version. “Ceridwen and Taliesin” is the most energetic song on the album, complete with bagpipes and some other instruments I can’t recognize. Damh teams with Kate Fletcher to give the shapeshifting chase scene the give and take it needs. It’s a great way to end the album.

If I was grading Antlered Crown and Standing Stone I’d give it a B+. It’s a very good collection of songs – there’s not a bad one in the bunch. In fact, this may be Damh’s best overall album yet. The only thing it’s missing is a something really powerful like “The Cauldron Born” or “Spirit of Albion.”

Perhaps that’s not a fair criticism – I’ve learned enough about writing to know these things come as the Awen flows. And it may be that “Antlered Crown and Standing Stone” will grow on me, and I’ll start to associate that music with our worship of Cernunnos and not with the Christian worship it so resembles.

In the end, these are the first new songs from Damh the Bard in four years, and that makes me happy.

Antlered Crown and Standing Stone
by Damh the Bard
10 songs, 53 minutes 40 seconds
available on Amazon, iTunes, and at paganmusic.co.uk

November 22, 2012 Thanksgiving Prayer
Recent Comments
0 | Leave a Comment
"The thing with reconstructionism is that people try to reproduce things as they were back ..."
Bor1am 5 Things I Had to Unlearn ..."
"Clap, clap, clap. Well said, John! Thank you very much :)"
Reme Latorre 5 Things I Had to Unlearn ..."
"On a less facetious note, I want to direct people to take a look at ..."
Jules Morrison The Pew Doors of St. Cuthbert’s ..."
"I think I'm going to call those things pewbicles."
Jules Morrison The Pew Doors of St. Cuthbert’s ..."
Browse Our Archives
get the latest updates from
John Beckett
and the Patheos
Pagan
Channel
POPULAR AT PATHEOS Pagan
1