I’m back from four days at Between the Worlds, which bills itself as an “interfaith esoteric conference” for intermediate and advanced practitioners. Between the Worlds isn’t held every year, but rather “when the stars indicate that such a gathering is needed and favored.” This was my first – it came highly recommended and it did not disappoint.

Many traditions were represented in the lineup of speakers and workshops, including Wicca, Druidry, Asatru and Feri, as well as more classical versions of the Western Mystery Tradition. The leaders were some of the best in their fields, and the participants were almost all experienced practitioners. This made for a serious event with some good spiritual depth. Workshops and rituals started on time and finished on time. If anyone thinks Pagans can’t be professional, they need to come to Between the Worlds.

I could go on and on in generalities, or I could transcribe my ten pages of notes – neither would do justice to the conference. Instead, I’m going to pass along some of what I think were the most helpful parts. 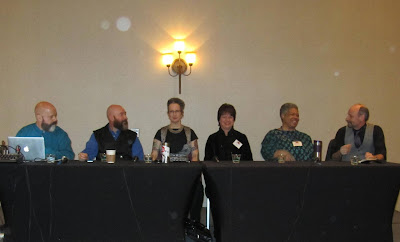 The Friday morning panel discussion was moderated by Michael Smith and featured Ivo Dominguez, Jr., Thorn Coyle, Aeptha, Katrina Messenger and Sam Webster on the topic of “The Turning of the Ages: What to Keep, What to Throw Away, and How to Decide.”

Ivo began by making the point that if this was the Spring Equinox, you wouldn’t put away all your Winter clothes. Change comes slowly, gradually, and doesn’t always flow in one direction. He also used the example of building a house to remind us that even the best plans will need to be changed once construction is underway. Thorn asked “what’s your long arc?” – what are your long term goals, and what are you doing to support those goals every month, every week, every day? Katrina reminded us that some of our most popular myths have never been true (either literally or mythically) and that we should always question the stories we’re told. Aeptha told us to do what we’re called to do and don’t worry about the results – getting to where we want to go may take longer than our lifetimes. Sam talked about how in the 70s there were witches and magicians – now there are countless variations of folks like us. Ivo followed with the observation that Aquarius is a sign of differentiation – we must learn to work together despite our fragmentation.

Perhaps the greatest honor was meeting, talking with, and learning from Dolores Ashcroft-Nowicki. John Michael Greer described Dolores as one of the last of the old school British occultists in the tradition of Dion Fortune. In John’s words, she’s a sweet, doting British grandmother… until she gets serious. Her story of the Magical Battle of Britain (she was 11 at the time – her mother and grandmother were active participants) had everyone at attention. And when she blessed the tokens at the main ritual, I could feel the power flowing from and through her. In one of her workshops she said “a good magician you hardly notice.” She fits that very well… until it’s time to notice her. The Saturday morning panel was on “Operative Magic: Risks, Rewards, and Limitations.” It featured Dolores Ashcroft-Nowicki, John Michael Greer, Jason Miller, Christopher Penczak, and Jacki Smith. Moderator Michael Smith opened it by saying “this isn’t the kind of magic to connect to the Divine, this is the kind of magic to get a job.”

When Dolores said “I’m going to pull rank” and go first, all the other panelists just nodded. She said magic requires patience and dedication – it takes years of constant practice to do it well. Jason said “operative magic without mediation will muck up your life” – your mundane action, your magical action and your divine action must be aligned. To one degree or another, all of the participants emphasized that magic requires work: training to build up your skills, constant practice to refine them, and ordinary effort to support them. John talked about “the Raspberry Jam Effect” – what ever you put your hands into is going to get stuck on you. Choose your magical workings and your magical clients with care.

The main ritual was titled “The Gates of Yesterday and Tomorrow.” It was led by the Assembly of the Sacred Wheel, who also organized and ran the conference. While it was a semi-public ritual, it doesn’t seem right to give a play by play recap. It was beautiful and powerful and had many, many correspondences with the ritual Erin and I have prepared for this Friday’s Denton CUUPS Winter Solstice circle. There’s a current flowing through the magical community and people are picking up on it in places as dissimilar as Delaware and Texas.

I’ll have at least two more blog posts inspired by Between the Worlds. What I’ve brought home will stay with me for years to come.