I spent this weekend in Columbia, South Carolina at the Sacred Lands and Spiritual Landscapes Symposium, which was presented by Cherry Hill Seminary in conjunction with the University of South Carolina. There were paper presentations, responses, conversations, dinners, drumming, and two wonderful talks by Ronald Hutton, Professor of History at Bristol University in the U.K. and author of fourteen books, including the highly influential The Triumph of the Moon.

I got enough ideas and quotes for at least two and maybe three blog posts and I want to start with the common theme between most of the presentations: our relationship with the land.

I’ve always felt a closeness to the land in general and the woods in particular – it’s one of the reasons I’m a Druid. Science tells us we weren’t placed on the Earth, we grew out of the Earth. The Earth is quite literally our Great Mother.

Yet for most Westerners, the value of the Earth lies only in the resources that can be exploited for personal gain. Land is something to be owned, subdued and controlled. This approach has greatly increased the wealth and comfort of those of us in the West, but it is not physically sustainable, and it is not spiritually helpful.

Symposium presenter Jeffrey Albaugh talked about how our relationship with Nature must shift from “I – not-I” to “I – Thou.” He said Pagans are uniquely qualified to “midwife new ways of being to the world” because we are used to crossing boundaries into liminal zones. He reminded us that “Nature is not a place to visit, it is home.”

Lisa Christie said that the psychic and mystical experiences many of us have on and with the land suggest that Nature is sentient. She quoted Susan Griffin, who said “we are Nature seeing Nature.” This is opposed to the mechanistic worldview most people still have that sees all things as separate. Lisa said that Pagans are “oracles of the Earth” and wondered how we can bridge our language to that of the mainstream.

Three presentations touched me personally: Elinor Predota described her research on young men and the forest – many years ago, I was very similar to the young men she’s studying. Sara Amis spoke of traditional Southern witchcraft. I didn’t experience that first-hand growing up in Tennessee, but I knew about it, and I’m sure it had something to do with my very early attraction to magic. And Byron Ballard told the story of the Scots-Irish settlers in Appalachia and how their culture “made the ground ready for Paganism.” The geography of a place greatly impacts those who live in it.

This was an academic conference, not a spiritual retreat. The presenters described their research and the conclusions it supports and for the most part did not engage in the kind of calls to action common in religious settings.

That’s a job of the rest of us. I came away thinking “yes, that’s right. Now what do I do with it?”

I think the key lies in a story Elinor told in her presentation, of the fear expressed by some of the young men from “the way the animals looked at them.” She said we’re used to being the observer, not the observed. In the Abrahamic religions, humanity is at the pinnacle of the Universe. Paganism, in contrast, is a pluralistic approach – we are one among many.

I occasionally hear the reverse of this idea expressed by people who attempt to deny the reality of evolution. They complain that evolution can’t be true because that would make us no better than the other animals. And if we’re no better than the other animals, we might have to show them some respect and consideration. We would lose our privileged place at the top of the food chain. We might even have to respect rivers and mountains and ecosystems.

The fact that idea makes some of us very uncomfortable does not negate its truth.

Several presenters touched on animism, the idea that everything has a spirit, that everything is numinous. This is a very old, very intuitive idea that has been completely rejected by the modern mechanistic worldview. But we can say this with certainty: whatever animates humans also animates the squirrel and the deer, the eagle and the raven, the salmon and the shark, the ant and the bee. Whether you see that animation theistically or non-theistically, what makes us alike is far stronger than what makes us different.

The future of humanity lies in developing a healthy, respectful relationship with the Earth and with all her creatures. That starts with understanding the land is sacred. 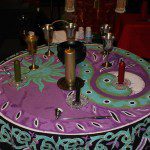 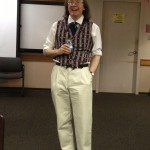 April 16, 2013 Ronald Hutton and the Paradox of Witchcraft
Recent Comments
10 Comments | Leave a Comment
""It’s not 'many paths up the same mountain.' It’s many paths up many different mountains."It ..."
Laurie Pagans in the Marketplace of Religions
"I like this analogy. We need to develop the MENTAL SKILL of skill-building, which skill ..."
Laurie You’re Just Making It Up As ..."
"Really... Interresting. I write a book with a friend (a fantasy/science fiction novel) and there ..."
Céline Aubé To Everyone Who Was Called by ..."
"Far right extremism is on the upswing worldwide. I was unfortunate enough to meet a ..."
Laurie The Dobbs Leak: A Litany of ..."
Browse Our Archives
Related posts from John Beckett