Our original plans called for us to visit Newgrange on the Spring Equinox.  While Newgrange is famously aligned to sunrise on the Winter Solstice, nearby Knowth (which is aligned to the Equinoxes – maybe) doesn’t open to the public till April, and just being in the Brú Na Bóinne area seemed special enough.  Unfortunately, mechanical problems with a rental car forced us to change our plans, and we ended up visiting Newgrange on a bus tour as the last major stop of our trip.

That was a disappointment for our Equinox observations, but neither the rescheduled date nor the rain and wind on the day of our visit could dampen the wonder and awe of Newgrange.

Brú Na Bóinne (the name means “palace of the Boyne”) dates to about 3200 BCE – older than both Stonehenge and the pyramids of Egypt.  There are about 40 burial mounds in the area, of which Newgrange is the largest and best explored.  Many of the smaller mounds haven’t been excavated.  The name Newgrange means “new farm” – the name was given to the area by Cistercian monks in the Middle Ages to differentiate it from their old farms.

Newgrange was built in the Neolithic period, without metal tools.  Some of the stones came from a beach 12 miles away, while others were brought from more distant locations.  No mortar was used in the construction – after over 5000 years it still doesn’t leak.

Newgrange is a passage tomb laid out in cruciform shape.  The long entranceway climbs about two meters, though I wouldn’t have noticed it if the guide hadn’t pointed it out – the elevation change is what allows the sunlight entering the roofbox to illuminate the floor on the Winter Solstice.  The entrance passage opens onto a main chamber with three side chambers to the left, center, and right.  Each chamber has a basin stone that was likely used to hold the remains of the dead.

We don’t know with certainty why Newgrange was built or how it was used, and the Newgrange guide did an excellent job of differentiating between what we know and what we think is likely.  My favorite explanation is that those who died during the year were placed in the tomb.  On the Winter Solstice, the sunlight illuminated the remains, sending the dead on to the Otherworld.  Then the remains were removed and buried elsewhere.

And then one year, people simply stopped coming. Again, we don’t know why. What we do know is that no living human entered the tomb for around 3500 years, until it was rediscovered in 1699. The roof box wasn’t rediscovered until 1967.

Today, access to Newgrange is allowed only via the Brú Na Bóinne Visitor Centre.  Tickets are sold for timed access, to limit the number of people in the tomb and the impact victors can have on the site.  The tour takes about an hour, of which perhaps 15 minutes is actually inside the mound.

As you walk up a fairly steep hill to the entrance, the size and beauty of the mound is overwhelming.  The white quartz stones on the front are a reconstruction by Professor Michael O’Kelly in the 1970s.  The stones were found at the site – the ancient people obviously used them for something.  What we have is O’Kelly’s best guess – others have speculated the quartz stones formed a paved walkway.  I like O’Kelly’s reconstruction – it may not be authentic, but it makes the mound look more like a temple.

Photography is strictly forbidden inside the tomb.  The passage is low and tight, but not excessively so.  The carvings on the inside are fascinating, if not as impressive as the spirals of the main kerbstone.  After everyone got in, the guide pointed out some of the highlights and talked about what we do and don’t know about Newgrange.  Her speculation (clearly labeled as such) on the possible religious aspects of the tomb struck me as honest, informed, and most of all, respectful.

Electric lights have been installed inside the tomb, to allow safe entry and to illuminate the main chambers.  For a brief moment, the lights were turned off, allowing everyone to experience the total darkness.  Then a light representing the Sun was turned on, giving an approximation of what it’s like to be inside Newgrange on the morning of the Winter Solstice.

My strongest experience of Newgrange wasn’t the recreation of the Sun illuminating the passage – that was too brief and there were too many people inside the chamber.  My strongest experience was the mound itself.  While touching the artwork is forbidden (and with good reason), it’s almost impossible to not touch the stone walls – there were too many people in too small a space.

The stones felt soft and permeable, like I could sink into them and fall straight into the Otherworld.  They were inviting and welcoming.  This is a place of my ancestors: perhaps my ancestors of blood, certainly my ancestors of spirit.  It calls me to remember them, to connect to them, to honor them… and to remember that some day, I will join them.

I had a similar experience at two tombs on Anglesey, though not at some of the others.

It’s important to remember – at least, it’s important to me – that while Newgrange may have been a temple, it was not used for daily or weekly worship.  It was a special place entered only at special times… and likely, only by special people.  I’m joyously thankful I got to visit Newgrange, but my work is here, in this world, among the living.

Blessings to those who built this marvelous place, to those who – however briefly – inhabited it, to those who preserved and restored it, and to those maintain it as a treasure for generations to come. 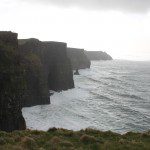 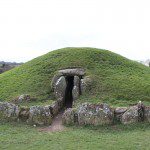