Pagan groups are notoriously volatile, in the chemical sense of the word:  they evaporate quickly.  Sometimes they’re volatile in the commonly used sense of the word:  they change rapidly, unpredictably, and for the worse.  Much of this volatility comes from a lack of understanding of what is required to form and maintain a functional and healthy religious group.

Good religious groups may evolve organically without any structural planning (or even structural awareness) but like biological evolution, for every successful species there are many that go extinct.  If you attempt to duplicate the evolutionary process of such a lucky group you’re likely to fail – you won’t have the same people in the same location in the same circumstances at the same time.

Fortunately, there are some commonalities among healthy religious groups that can be duplicated.  I touched on some of this when I wrote about how to start a CUUPS chapter.  Today I’d like to expand on the structure of religious groups.  While some of this comes from formal education in business organizations and leadership, most of it comes from a lifetime of experience in churches, fraternal orders, religious orders and Pagan groups of all descriptions.

Think of the structure of a religious group not as a hierarchy but as a set of concentric circles.  Start at the core and work your way outward. 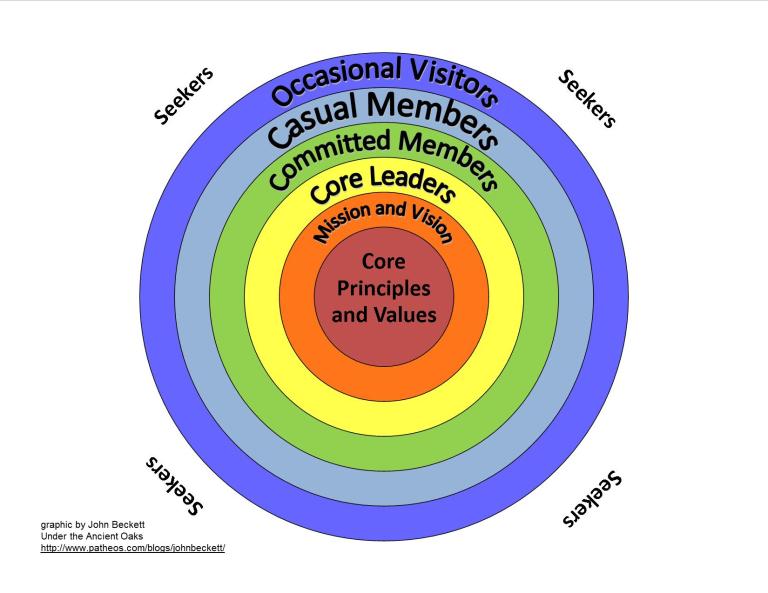 Core principles and values.  This is the core, the center, the foundation.  This is why the group exists in the first place.  Too often this core is ignored, or assumed to be something other than what it really is.

You want to start a Pagan group?  Great.  Will it be Nature centered, Deity centered, Self centered or Community centered?  You want to start a polytheist group?  Which pantheon?  Which deities?  You want to start a CUUPS group?  How do you see UU Paganism?  General UUism with an emphasis on the Seventh Principle and the Sixth Source?  Generic Wicca?  Devotional polytheism in an inclusive setting?  If members have different core principles and values they simply must negotiate which principles and values the group will be formed around or conflict is inevitable.

The core principles and values are who and what the group exists to serve.  Devotion to that core is what keeps people moving forward when times get tough.  Without it, it’s very easy to abandon a group when the work gets hard.

Mission and vision.  This is what you’re doing to do.  It’s how you’re going to serve your core principles and values.

Before I arrived in 2003 the members of Denton CUUPS created a very nice mission statement.  But if you want to know what our mission is today, go look at our calendar and see what we’re actually doing:  holding public rituals on the eight high days, participating in roadside cleanup, teaching classes and providing other opportunities for learning, and spending time in the natural world.

Core leaders.  Individual members don’t show up until the third circle.  This is critical:  the core principles and the mission are more important than any one person or subgroup of people.

Large, established, well-funded groups can function via institutional controls and operations.  Small groups rely on individual people to get things done.  One person can do this if she’s very strong, very capable, very grounded, and very committed.  Most times it takes two or three.  In a large group it takes more.

These are the people who keep the calendar and make sure everything gets done and done right.  They don’t do all the work – they can’t, that’s a recipe for fast burnout – but they make sure all the work gets done.  They are extremely committed to the principles and the mission and they do their best to keep everyone focused on why they’re there.  They understand people sometimes fail, but the group can never be allowed to fail.

It’s not enough to be dedicated.  A core leader also has be a good leader:  he has to have good communication skills, attention to detail, and the ability to embody the ideals of the group.  Don’t just tell people what a good member is, show them.

The core leaders aren’t necessarily the most skilled priests and priestesses – facilitating ritual and leading a group are two very different skill sets.  In churches, it’s common to find good pastors who are mediocre preachers or inspiring speakers who are lousy church managers.  Match the group’s needs with the capabilities of its members and don’t expect people to do things they can’t do.

Right or wrong, core leaders’ voices usually carry the most weight.  This is why groups need more than one core leader:  even the most committed and the most knowledgeable leaders aren’t right all the time.

Committed members.  These are the folks you can count on to be at every circle, every dinner, and every service project.  Maybe not at every single event, but if they aren’t there you can bet there’s a very good reason.  You can count on them as financial contributors, within their means.  They’re every bit as committed as the core leaders, but for whatever reason, they’re not leaders.  Maybe they don’t have leadership skills.  Maybe they’ve been burned in other organizations.  Maybe they just don’t like being in front.  They may accept short-term leadership roles, but don’t look for them to drive the train.

Occasionally a committed member will become a core leader, but be very hesitant to push them in that direction.  If they accept only out of obligation, they may be hurt when – through no fault of their own – they aren’t able to get the results they know the group needs.

Casual members.  These are the folks you can count on to be at some events some of the time.  If they commit to something they’ll do it, but they’re not likely to commit to much.  They may have other obligations (work, family, other religious groups) that also have a claim on their time, the core principles and values may not be of great importance to them, they may be new to the group or they may be old members who are stepping back, either out of fatigue or to allow someone else to step forward.

Accept the reality of casual members and be thankful for what they contribute.  If you push them to become committed members before they’re ready, you’ll lose them.

Some may be potential members who just haven’t joined yet.  Maybe they want to be sure what they’re getting into.  Maybe they’re reluctant to commit.  Or maybe they’re just waiting to be asked.

Listen to occasional visitors.  They have a different viewpoint from the active membership and they may see things you overlook.  But be wary of giving them too much influence.  They aren’t invested in the group and they won’t be the ones who have to clean up if things go badly.

Seekers.  These are people who are looking for something.  They may not know what they’re looking for, but your group might be it.  Or not.  After a couple times, they may dive right in.  Or you may never see them again.

Seekers are your guests – treat them with the hospitality they deserve.  Seekers are potential members – be honest about who you are, what do, and what you can’t do. Make sure the path to the inner circles is clearly communicated.  But seekers are unpredictable – don’t allow them to distract you from your core principles and values.

Governance.  This is a model of how small groups are structured.  It says nothing about how those groups make decisions.  This model works with direct democracy, it works with representative democracy, and it works with autocracy.  The Order of Bards, Ovates and Druids is essentially a benevolent dictatorship under Chosen Chief Philip Carr-Gomm and his hand-picked lieutenants.  It works because Philip is a highly competent leader who is strongly committed to OBOD’s core principles and values, as are those who work under him (individual groves select their own leaders and governance style).

Democracy is often fetishized in liberal religious circles.  While the democratic process provides natural checks against the abuse of power, it is no substitute for commitment to core principles and values or for effective leadership.  Done right, democracy is a great thing, but democracy alone accomplishes nothing.  Choose the governance method that works best for your mission and for the people who are carrying it out.

Building.  If you’re trying to build a coven, a grove, a CUUPS group, or a priesthood for a deity, start with the core principles and values.  Why are you here?  What’s most important?  Who do you serve?

Figure out how you’re going to approach those principles and values – this is your mission.

Then start looking for people who share those principles and values and who want to work on that mission.  Don’t expect people to be something they aren’t – no matter how badly you need them to be something else – and don’t get caught off guard when they move from one circle to another.

Get that right and the rest is simple.  It’s a lot of work, but it’s simple work compared to this. 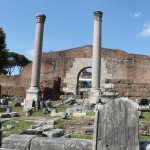 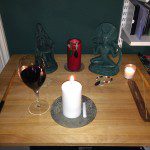