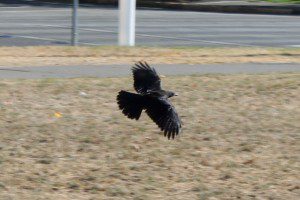 This past weekend, 180 people, various spirits, uncounted ancestors, and many Gods attended the Many Gods West conference in Olympia, Washington for three days of workshops, rituals, deep conversations, and joyous friendship.  It was organized by Niki Whiting, Rhyd Wildermuth, and P. Sufenas Virius Lupus, who all did a fantastic job of running a new event in a new location.

Paganism is a wonderful Big Tent of Wiccans, Witches, Heathens, Druids, tree-huggers, and seemingly-thousands of other traditions.  But these varying traditions have concepts and practices that are often at odds with each other.  In order to keep from being distracted either by those who insist their way is the only right way to be a Pagan or that all ways are really the same, polytheists have begun creating dedicated spaces for the study and practice of polytheism.  Last year saw the first Polytheist Leadership Conference and the launch of Polytheist.com.  Many Gods West continues in that tradition.

The conference opened with a community ritual led by P. Sufenas Virius Lupus.  Participants were invited to bring water and soil from their homes, communities, or sites sacred to their practice.  They were also invited to bring images of deities they had long relationships with.  I placed an image of Brighid on the altar, representing Denton CUUPS’ 20+ year work with Her (work that precedes the actual formation of our chapter).  Land spirits and ancestors were invoked and honored, with invocations for female ancestors, male ancestors, gender variant ancestors, warrior ancestors, spirit worker ancestors, and the dead who are not yet ancestors.  The altar stayed up till the end of the conference and was a site for devotions, offerings, meditations and prayers.

Morpheus Ravenna of the Coru Cathubodua gave the keynote address on Friday night, which focused on Gods and archetypes and the importance of agency.  This is an issue that has troubled the polytheist community, though the trouble has been more from without than from within.  The address was a work of theology – the kind of deep reasoning about the Gods we rarely see in Paganism, even though pagans (specifically, the ancient Greeks) invented theology.

Morpheus said that archetypes are real, but they’re animated by the Gods and not by our own minds.  Archetypes are like stained glass windows which show different pictures and different colors to different people standing in front of different windows, but ultimately they’re illuminated by the sun, not by the viewer.

Every other time slot (until the closing ritual) had at least two and sometimes as many as four offerings – choices had to be made.  I heard Rhyd Wildermuth speak on Meaning (a version of that presentation was on Saturday’s Wild Hunt), Sobekneferu speak on worshiping deities whose mythology was written by their antagonists, Elena Rose speak on loving our monsters, Sean Donahue speak on the Dead as allies of resistance, and Anomalous Thracian speak on regional cultus and the importance of our relationships to place – our experiences of the Gods are at least in part dependent on where we are.  I’ve got seven pages of notes I need to finish digesting – many of the ideas presented at Many Gods West will be seeds for future blog posts. 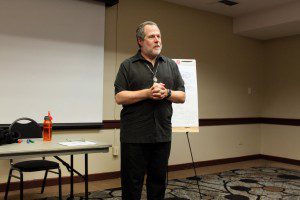 I spoke on Preparing the Way of the Gods.  Many of us want temples, groves of oaks, paid clergy, and other things we see in the “big religions.”  On the other hand, some of us want nothing to do with anything that even resembles mainstream religion.  We know polytheism needs institutions, but how do we make sure what we build serves our needs and the needs of those who come after us?  How do we prepare the Way of the Gods?  I’m going to do something to turn my 10-page outline into a readable narrative, but the bottom line is that we do it by keeping our focus on practice, on serving the Gods and our communities, and on the missions of our institutions, not on the institutions themselves.

I attended two rituals.  The Coru’s Devotion to Cathubodua was an example of how to honor the Gods in a way that is respectful to the Gods, ancestors, and spirits while being a powerful and meaningful experience for the human participants.  River Devora and Rynn Fox led a devotional and oracular ritual to the Matronae, a collective of European Goddesses worshipped during the Roman era.  I didn’t attend Bakcheion’s celebration honoring Dionysos Bakcheios – it was opposite my presentation.  Its title was “Filled with Frenzy” and the reports I heard from those who participated said it was exactly as advertised.  Ember Cooke led a ritual in honor of Freyja – I would have liked to participated in it, but it was opposite the Matronae ritual.

The formal programming at Many Gods West was excellent.  The informal conversation was better.  The Patheos Pagan writers in attendance (plus two spouses and three children) had great lunch that gave us an opportunity to talk about this site and our writing, but also to talk “live” about some of the issues we’ve been discussing online.

I was part of a small dinner party that focused on our experiences of a certain Great Queen and the work we do with and for Her.  Other conversations – during the day over tea and coffee and late night over mead and whiskey – ranged from more theology to our own specific work for the Gods to stories of successful rituals and workings, as well as other stories where we learned from the mistakes of ourselves and others.

And some conversations were simply frivolous and fun and may or may not have included traumatizing YouTube videos.

Niki, Rhyd, and PSVL are still basking in the afterglow (or is that just exhaustion?) of the first Many Gods West, but everyone I talked to hopes there’s another one in 2016.  If so, they will need help, particularly local help.  If there’s another one, I’ll do my best to be there. 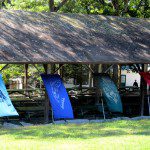 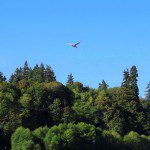 August 5, 2015 You Can’t Practice Paganism While You Look Down Your Nose At It
Recent Comments
0 | Leave a Comment
Browse Our Archives
Related posts from John Beckett