This past weekend was my fourth time at the ADF Texas Imbolc Retreat. It’s hard to compare the four gatherings – they’ve all had different themes, different speakers, different participants, and different weather. This year’s retreat may or may not have been the best of the four, but it was excellent by any standard.

A few things have been constant: lead organizers Chris and Amanda Godwin and the folks of Hearthstone Grove in Austin. U Bar U, the Unitarian Universalist retreat center near Kerrville, where the retreat is held. Rev. Jon Drum, now Archdruid of ADF. And my favorite part of any Pagan retreat, the informal but deep conversations you just can’t have anywhere else.

Nine Waves Grove from Houston led the opening ritual. Nine Waves follows an Anglo-Saxon hearth culture – the deities are different from my usual Pan-Celtic approach, but as grove leader Lauren Neuman reminded us in her presentation on Saturday, we still know Their names, because six of them were preserved in the English days of the week. Nine Waves did an awesome job with the ritual.

Professional bard David Thompson presented a talk on Slavic Paganism and later led a Slavic ritual. Much of Slavic Paganism is based around home and hearth rather than around temple or grove, making it very suitable for a solitary practitioner.

Cynthia went with me this time and we co-led a workshop on ecstatic devotion, which we define as the direct experience of a God or spirit within the context of religious worship. This was a new workshop for us – which always makes me nervous – but it seemed to be well-received. Some of this material will end up in a future blog post or two, but the full presentation will probably be saved for a future book (beyond the one coming out in May).

Chris Godwin presented a new magical system he’s developing based on Indo-European cultures and practices. It’s still very rough and it will need testing and refinement, but it looks promising. It is very attractive for those of us who like the concepts of thaumaturgical correspondences but don’t like the Abrahamic elements that found their way into Wicca.

Archdruid Jon Drum talked about Isaac Bonewits’ original vision for ADF and why the fire, the well, and the tree are so important in ADF practice. Hearthstone Grove led the main ritual Saturday night in honor of Brighid. During the day we wrote our prayers on strips of paper and tied them to a huge Brighid’s Cross, which was offered to the fire toward the end of the ritual.

The sky was clear and the moon was full on Friday night. After Cynthia recited a campfire piece to Cernunnos and Chris Godwin sang a hymn to the Morrigan, I felt the need to go to the woods. I followed the trail up into the hills – it was so bright I never needed my flashlight. How better to prepare to talk about ecstatic devotion than to experience ecstatic devotion the night before. Much of what I experienced was deeply personal, but some of it will make its way into our Beltane ritual in May.

Our last event Saturday night was a bardic competition. There were seven competitors. Five were singers. I told The Tale of Gwion Bach. Cynthia won with her rendition of “Come Ye Huntsmen,” an original poem about the Wild Hunt from the perspective of the Otherworldly riders.

I was wondering what to write about in this post, beyond the usual recap of what we did and how it went. On the drive home, Cynthia pointed out that when she’s gone to OBOD camps with me, she’s always been one of the few non-OBOD people in attendance. But while the Imbolc Retreat is an ADF event run by ADF groves and members, half of its presenters and over half its participants are not formally affiliated with ADF (I’m a member of ADF but my primary affiliation is with OBOD, with CUUPS, and with the polytheist practice I’m building).

Some of these people are solitary practitioners. Some are friends of ADF members and groves. Some are part of different traditions but enjoy hanging out with other Pagans and polytheists in the Texas Hill Country.

And they all gathered in a circle around ADF’s fire, well, and tree.

ADF is orthopraxic – all their rituals follow the Core Order of Ritual, which honors the Three Kindred of Gods, ancestors, and Nature spirits. But ADF does not tell its members – much less its guests – what to believe about the Three Kindred. Non-Pagans are welcome – this year’s participants included two Christians and one Buddhist. Hospitality is among the greatest of Pagan virtues, and it was embraced and embodied this weekend.

ADF is what it is and does what it does without excuse or apology, and it also welcomes all people of good will to gather around its fire. Many of the Imbolc retreat’s participants have gone home to practice Wicca or Christianity or their own form of spirituality, and this weekend they happily gathered under the banner of ADF.

In the process, friendships were made and renewed. Alliances were formed and strengthened. People learned things they didn’t know before, not by reading about them but by experiencing them. 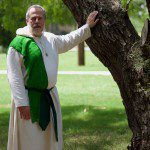 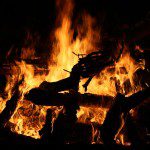