Real Magic: The Scientific Evidence for the Reality of Magic

Read some of the popular books on magic and witchcraft from the 1960s and 1970s and you’ll see an attitude of optimism. The authors were sure that science was just a few years away from proving the reality of magic – all we needed was a little more research.

What research we got was denied, ridiculed, and suppressed. Part of this was because the whole idea of magic is heresy to institutional science, with its strong materialist worldview. But part was because the research results couldn’t easily be monetized or weaponized.

Still, research has consistently shown that there’s something there. 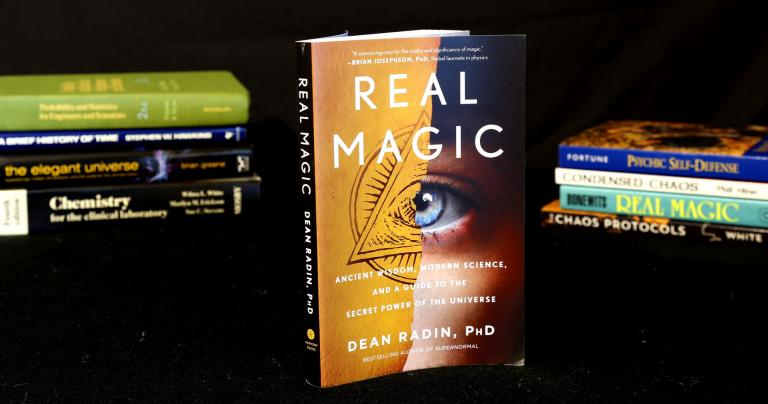 Real Magic: Ancient Wisdom, Modern Science, and a Guide to the Secret Power of the Universe is a new book by Dean Radin, PhD. It presents case after case of experimental evidence that magic is real. The fact that it is not turning the scientific establishment upside down isn’t because it’s fraudulent or lacks scientific rigor, but because what it proves can’t be easily exploited for profit.

Dean Radin’s biography is impressive. He has bachelors and masters degrees in electrical engineering from the University of Massachusetts and a PhD in psychology from the University of Illinois. Those are top-notch degrees from top-notch schools. He’s worked at AT&T Bell Labs, Princeton University, and the University of Edinburgh. He is currently the Chief Scientist at the Institute of Noetic Sciences (IONS), where he conducts the research that forms the foundation for his books The Conscious Universe (1997), Entangled Minds (2006), Supernormal (2013), and now Real Magic (2018).

Radin says real magic falls into three categories: “mental influence of the physical world, perception of events distant in space or time, and interactions with nonphysical entities.” He calls these “force of will” “divination” and “theurgy” – even though he approaches them from a strictly non-religious viewpoint.

At the core of Radin’s exploration of magic is the question of consciousness – how is it that we and many (most? all?) other creatures are aware of our surroundings and our lives?

What is consciousness, where does it come from, and what’s its purpose?

Materialism says that consciousness is simply a product of the brain. But this remains an assumption, not a scientific finding – and one that evidence indicates is not a particularly solid assumption.

Radin lists seven common ways to understand the relationship between consciousness and physical reality. Three of them say magic is impossible or unlikely. Three say magic is highly possible. One says magic must exist. Which one is right? We don’t know.

The greatest value of this book is Chapter 6 “Scientific Evidence.” It’s a detailed but still readable description of some (though far from all) of Dr. Radin’s experiments and their results. He divides his experiments into six categories: telepathy, remote viewing, presentiment (reaction to future events), precognition, random number generators, and the Global Consciousness Project (which compares the output of random number generators during events of global interest, like terrorist attacks).

One of my favorites is the “blessed chocolate” experiment, where people were given chocolate that may or may not have been blessed by Buddhist monks, in a controlled double-blind setting. The results showed that eating the blessed chocolate instead of the ordinary chocolate improved the subjects’ mood, with the odds against chance of 24 to 1. Proof? No. Evidence? Yes.

A similar experiment compared plant growth using blessed and non-blessed water. This time the results were far stronger – the odds against chance were 38 trillion to one. That’s almost certainty.

Professional scientists should understand that. Unfortunately – but not unsurprisingly – Dr. Radin has had trouble getting his research published in major scientific journals. This is a problem with the scientific establishment.

When a scientist or journal editor declares that something is impossible and must be stopped, even in the face of supporting experimental evidence, then we’re no longer dealing with science.

Like history, science often advances one funeral at a time.

I can’t remember how many times I’ve said that magic doesn’t depend on belief, it depends on action. Dr. Radin’s research says I’m wrong, at least to a certain extent. “Poorer remote viewing performance was associated with lower levels of belief, and better performance with higher levels of belief.” This correlates with anecdotal evidence Gordon White talks about occasionally on his Rune Soup podcast: cultures where magic was never “explained away” have more and better magical and spiritual encounters than those of us in the West.

Still, while a lack of belief will hinder your magic, it won’t completely drown it. And it may very well be that simply beginning that first spell is belief enough to get you started.

If you need more belief, read this book and follow where the evidence leads.

The evidence is overwhelming that there’s something to magic. The problem is that what that something is seems to be rather weak.

Another experiment asked 12 professional mediums to look at pictures and determine if the person was dead or alive, again in a very controlled setting. Their accuracy was 53.8% – 50% is what you’d expect from guessing. That’s not much, until you look at the statistics, which show that the odds against chance were 250 to 1. The professional mediums were definitely better than chance, but not a lot better.

Magic is real but it’s weak, so it can’t be monetized or weaponized on a large scale. That’s a good thing. The Army got some interesting results from their remote viewing program, but it wasn’t detailed enough or consistent enough to help them defeat the Russians, so the program was abandoned.

That’s understandable – if something has no great practical applications why would anyone invest time and energy in studying it? Except, we’re dumping billions and billions of dollars into projects like CERN with no expected payoff except an increase in knowledge. So why not put a few million into researching magic and consciousness?

Because confirming obscure theories of physics supports a materialistic worldview, and confirming the reality of magic and the primacy of consciousness challenges it. And the gatekeepers are strict materialists.

[Lest there be any misunderstanding: I support funding CERN and other scientific research with little opportunity for practical applications. I just want non-materialistic science research funded too.]

While my religion is a magical religion, it remains first and foremost a religion: a set of beliefs and practices designed to build and maintain relationships with my highest virtues and values, and with many other persons, some of whom are human and some of whom are not.

This book changes none of that. Radin touches on angels, demons, fae, and other spiritual beings, but then says “the jury is still out.”

My hesitation doesn’t mean that such entities don’t exist. It just means that we don’t have methods yet that can strictly discriminate between psi effects in the living and independent, disembodied intelligences.

Nothing in the evidence he presents or the theories he proposes rule out the possibility of the many Gods, so I see no conflict between my Paganism and his science of magic.

And I see plenty of evidence that continuing my magical studies and practice is a worthwhile endeavor.

Want to hear Dr. Radin discuss his book and the research behind it? Here are three interviews he did earlier this year. I’ve heard them all and I recommend them.

1) For those who care about such things, I bought my copy of Real Magic. I don’t know Dean Radin at all and while after reading his book I wish him great success with it, if I thought it wasn’t worth reading, I’d say so.

2) One of Isaac Bonewits’ early books (1971) is also titled Real Magic. Isaac was one of the magicians who expected scientists to eventually confirm his beliefs about magic, if they’d ever get past their materialistic biases. Dr. Radin mentions Isaac’s book as an example of how some practicing magicians have addressed the connections between psi and magic.

3) Note to commenters: I do not insist you read the book before commenting, though I recommend it. I do insist that you engage the material presented in this review. Comments that dismiss Dr. Radin’s research out of hand will be dismissed from this blog without warning. 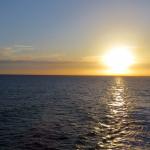 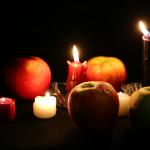 September 11, 2018 Enough With the Mabon Hate!
Recent Comments
0 | Leave a Comment
"As a Nature-centered Pagan, I really enjoyed the Olivia Graves video. Picking up trash while ..."
Kristin Sweeney Building a Relationship with the Nature ..."
"In the yard of the house where I grew up grew (thanks to the previous ..."
Pitch313 Building a Relationship with the Nature ..."
"Ironically the USA which lauded itself as having thrown off oppressive monarchy, established democracy and ..."
Michel An American’s Thoughts on the Death ..."
"Vedic theologians say that Hinduism is in fact monotheist. All the deities are simply varying ..."
Michel Worshipping Deities From Different Cultures
Browse Our Archives
Related posts from John Beckett