Hail to Manannán mac Lir, God of the Sea and Ruler of the Otherworld!

I have what I’d call an occasional relationship with Manannán mac Lir. I call on Him occasionally and He calls on me occasionally, but He’s not part of my regular devotional cycles. Perhaps this is because He’s a Sea God and I’ve always lived inland, or perhaps He knows my devotional card is full.

In the back of my head I hear Someone saying “your devotional card is never full.” I’m going to pretend I didn’t hear that for as long as I can get away with it.

Still, the interactions I’ve had with Manannán have been positive, and I’ve been looking for a statue of Him for a long time. I’ve found nothing. I haven’t even found a generic statue that could be reconsecrated to Manannán.

There is the statue of Manannán in Ulster that was vandalized by Christians in 2015. It was replaced a year later, and at the time I hoped that small replicas would be sold. But apparently not.

Back in the summer, Pagan artist Ashley Bryner offered to take commissions for artwork in the various media in which she works. I’ve seen Ashley’s work before and I like it – she did the cover for the Morrigan devotional anthology By Blood, Bone, and Blade. My first question was “what can you do in the way of devotional art for Manannán mac Lir?”

Artistic commissions are tricky things. You have an idea in your head that’s more like a series of fragments than a complete vision. You tell the artist what you want and hope they’re able to see your mental image better than you do, and that they have the skills to bring it to life. I’ve been the commissioning patron before – other times I’ve been the artist. I’ve created flyers for rituals other people are leading, and I’ve created rituals at other people’s request. Sometimes the process is easy and sometimes it’s not.

This is how I described Him to Ashley:

I see Manannán as a mature man, neither young nor old (say, 35 to 40). Height is irrelevant (though Gods are usually portrayed as tall), but He has an “average healthy” build – neither thin nor bulky. The famous statue in Northern Ireland is both too thin and too muscular. Hair and beard are longish by our standards – typical of what we think of for pre-Roman Celts.

He is a God of the Sea – He is not the sea itself. So pictures that would have the lower part of His body be a wave would not be appropriate. He’s known for riding a horse or a horse-drawn chariot across the ocean – depicting them as part of the sea would be proper.

He’s also the King of the Otherworld. Some see Him as a gatekeeper, but I see Him more as someone who opens the ways. Think “clear the road” rather than “open the gate.” He has weapons in some tales, but I don’t see that as particularly important. The trident belongs to Poseidon, not Manannán.

Some sources present Manannán as a trickster. I’m not fond of those, in part because of my general avoidance of trickster deities, and in part because I’ve never gotten any of that in my (admittedly limited) UPG of Him. He is a ruler: strong and regal.

Ashley’s response was “I’m finding myself nodding along to much of this and I already have an idea in mind.”

It’s always good to work with artists who understand that devotional artwork requires more than just a clear vision and technical skill. It also requires devotion. I didn’t ask for anything special, but Ashley added seawater from the Atlantic to the paint water, then infused it with local flowers. The painting began at the dark moon.

I got the finished painting last week. It’s even better than I had hoped.

Ashley and I were also in agreement as to the ownership of the painting. The original is mine and I can use it for things like blog illustrations. She retains the right to sell prints. So go buy a print – they’re only $10.

I think my “occasional relationship” with Manannán mac Lir is not uncommon. It’s not that people don’t know Him or don’t like Him, it’s just that He often gets overlooked while we focus our attention on Lugh or the Dagda or the Morrigan. The Wikipedia page on Manannán is quite good, and includes links to several of His stories.

I once heard ADF Vice Archdruid Sean Harbaugh tell a story of a fisherman on the Isle of Man (which is named for Manannán) who continued to make offerings to Manannán long after his neighbors converted to Christianity. They mocked him for it, but his devotion was unwavering. One day he found himself in a precarious situation at sea. He prayed to Manannán, and prayed, and prayed. At the last minute, Manannán appeared and rescued him, but when he returned home safely no one believed him. The fisherman continued to make offerings to Manannán for the rest of his life.

As for me, I imagine my occasional relationship will continue. I’ll call on Him if I have need of anything in His realm, and He’ll call on me if He needs a Druid to do something for Him.

Like encouraging a talented artist to create a devotional painting.

Hail to Manannán mac Lir, God of the Sea and Ruler of the Otherworld! 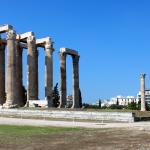 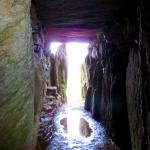 October 14, 2018 So You Want To Be A Pagan – A Guide For Pagan Newcomers
Recent Comments
0 | Leave a Comment
Browse Our Archives
get the latest from
John Beckett
Sign up for our newsletter
POPULAR AT PATHEOS Pagan
1