Psychic Witch is the book 13-year-old me was looking for when I was searching the shelves of my local bookstore trying to find something to help me “expand my mind.” I didn’t know exactly what that meant, but it was the only language I had in rural-suburban Tennessee in the mid-1970s. If this book had existed then, it would have been just what I wanted: something teaching psychic skills and operations in a straightforward, hands-on, non-religious way. 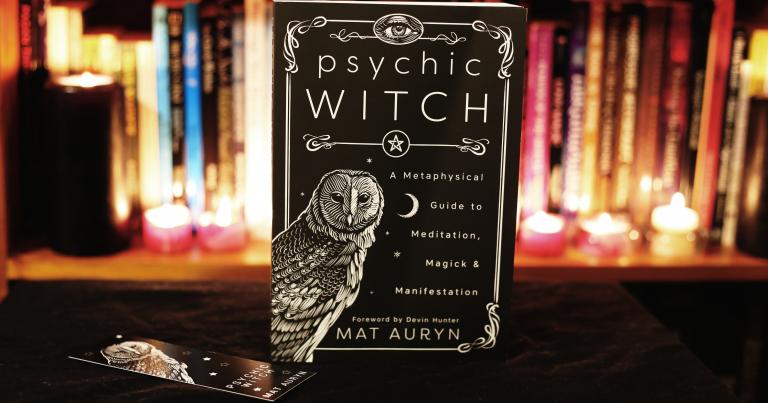 Fellow Patheos Pagan blogger and author Mat Auryn doesn’t waste words. On page 1 he says “psychic and magickal power is our birthright.” Like all other innate talents, it’s not distributed evenly throughout the population – it comes easier for some than for others. But also like other innate talents, what you do with what you have is what matters most.

One who may not have been as naturally predisposed to the occult has the potential to surpass those who do have this orientation yet never work at enhancing it.

The first chapter covers energy, brainwave states, affirmations, and the sense of childlike wonder that helps us see what we’ve been trained to not see by our materialist culture. Chapter 2 covers meditation, and Chapter 3 teaches grounding, centering, and basic energy manipulation. Multiple practical exercises are woven into the text: you read about a concept, then there are step-by-step instructions for putting it into practice. If you like diving in and learning by doing, you’ll love Psychic Witch.

Chapter 4 covers extrasensory perception and how to develop the five “clairs”: clairvoyance (clear sight), clairtangency (clear feeling), clairaudience (clear hearing), clairgustance (clear tasting), and clairalience (clear smelling). This chapter has 18 exercises, most of them between a third and half a page. Chapter 5 covers purification and shielding. These are basic skills that anyone who practices magic in any form needs to develop.

This would be a good time to talk about Mat’s roots as a psychic witch. In the Dedication he thanks the four largest influences on his path: Silver RavenWolf, Christopher Penczak, Laurie Cabot, and Devin Hunter. It would be hard to find four more influential witches from the mid-1990s to today.

Laurie Cabot’s Power of the Witch was the first book I read after I discovered Wicca and started down the path that would bring me to where I am today. While the exercises in Psychic Witch are Mat’s, I can see Laurie Cabot’s influence in them. So I can tell you they work, some because I learned similar techniques from Laurie’s books, but others because I took her principles and used them in ways that made sense to me. It’s clear that Mat did the same thing.

The longer I practice the more I see this: someone writes about something I’ve been doing for years. Sometimes we had similar sources, but more often we had similar circumstances and came up with similar solutions separately. In biology this is called convergent evolution.

But also, Carl Jung said “people don’t have ideas. Ideas have people.” Good ideas – like many of those in Psychic Witch – often have multiple people. Mat Auryn presents these ideas in his own way, a way that is very easy to follow. 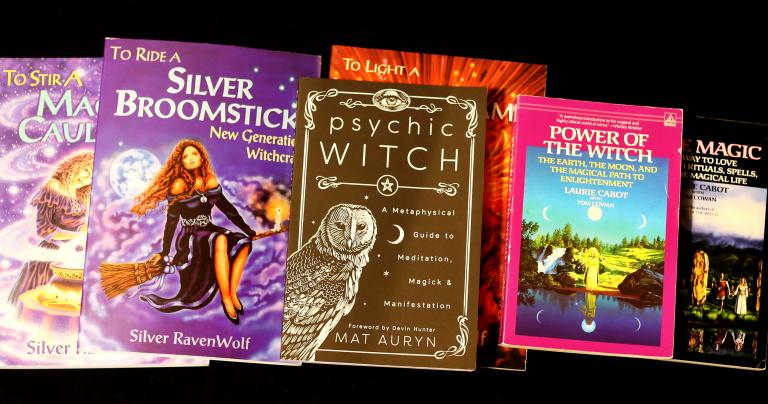 The second half of the book is where Mat and I start to diverge. Like many modern witches and Pagans, he talks about the upper world, the middle world, and the lower world. Two years ago – in response to a comment by Devin Hunter – I wrote Unpopular Pagan Opinions: I Don’t Believe in the Three Worlds. I see two worlds: this world and the Otherworld (which may be many Otherworlds or may be one Otherworld with many realms).

I’m less opposed to the idea of a three-part soul: the Lower Self (the animal soul and the unconscious mind), the Middle Self (the conscious mind), and the Higher Self (the spirit, the God-soul). This concept is grounded in the psychological work of Sigmund Freud and Carl Jung, and it’s common in many magical traditions, especially those with roots in the late 19th and early 20th centuries. It’s proven to be useful, especially the related concepts of soul alignment and true will – I have no issues or concerns with any of the exercises in this section.

But in describing the Middle Self, Mat says “the Middle Self is a name used for our mind and is the aspect of ourselves that differentiates us from other animals.” I’m not comfortable drawing a qualitative distinction between humans and other animals. Chimpanzees – our closest genetic relatives – are more like us than most of us care to admit, in both good ways and bad. So are our more distant cousins. We have bigger brains and the capacity for language – that’s about it.

At the end of the day Mat is a psychic witch and I’m a polytheist priest. Our metaphysics are similar but they’re not identical. Who’s right? Or at least, more right? We have no way of knowing.

Who should read Psychic Witch?

An alternative subtitle for Psychic Witch could be “a beginner’s guide to psychic perception and energy work.” It’s the best book I’ve found for that purpose.

It’s more focused than Silver RavenWolf’s To Ride A Silver Broomstick and more straightforward than Laurie Cabot’s Power of the Witch. The closest comparison I have is Thorn Coyle’s Evolutionary Witchcraft, but I would recommend starting with Psychic Witch and then using Evolutionary Witchcraft as an intermediate resource.

As a polytheist priest, I would prefer beginners start with something that builds a polytheist worldview: Irish Paganism by Morgan Daimler, or my own book The Path of Paganism.

But 13-year-old me wouldn’t have cared about building a polytheist worldview. I just wanted to “expand my mind” and learn some basic hands-on magic. I suspect most readers of Psychic Witch feel the same.

They won’t be disappointed.

Llewellyn’s publicity department dropped the ball and didn’t send me a review copy, so Mat gave me one of his books at Austin Witchfest. Mat is a friend and I hope Psychic Witch sells a million copies, but my responsibility in a book review is to the reader. If I couldn’t give it a good review, I’d conveniently forget to review it. This is my honest assessment of the book.

April 2, 2020 A Modern Pagan Guide to Cursing
Recent Comments
0 | Leave a Comment
"I feel that giving a lot of importance to titles provided by an organized pagan ..."
Barros Serrano Are Self-Given Titles Valid?
"We have discovered in recent years, with the Right radicalization of the GOP, transforming it ..."
Barros Serrano Religion is Inherently Political and I’ve ..."
"Spot on, thank you for sharing."
OrderInTheQuartz We Have Only the Rights the ..."
"It's a hard world for me to live in. So far I have lost the ..."
I. H. Hagar Religion is Inherently Political and I’ve ..."
Browse Our Archives
Related posts from John Beckett