The grimoire magic of the Middle Ages is firmly grounded in the Christianity of that period. Kabbalah is grounded in Judaism. Even that most anti-dogmatic of magical systems – chaos magic – is grounded in post-modernism and secularism.

And that brings us to Cat Heath’s new book Elves, Witches & Gods: Spinning Old Heathen Magic in the Modern Day. The title tells you exactly what it is: magic, grounded in what we know about the practices of the ancient Norse (especially Icelanders) and Anglo-Saxons, adapted for contemporary Heathens. 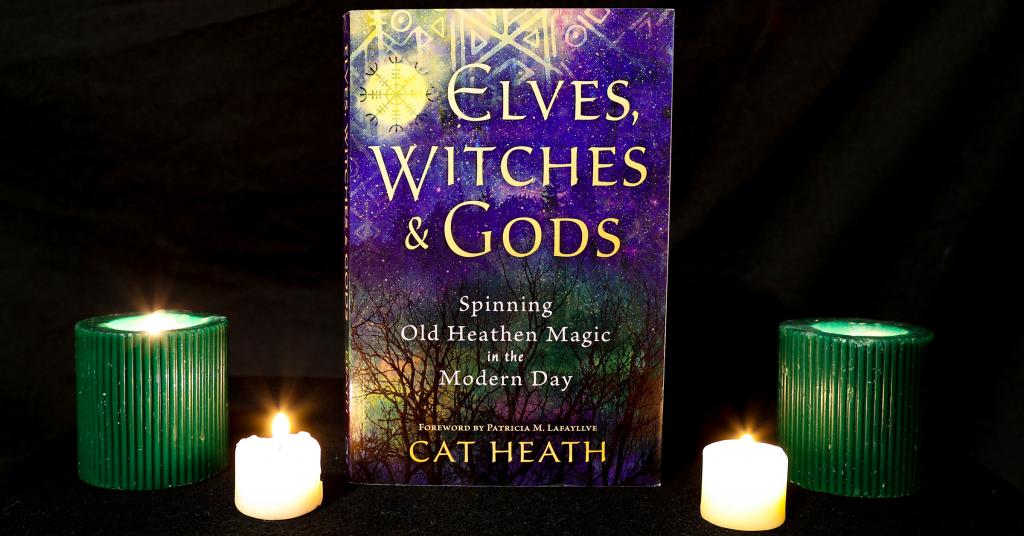 I’m not a Heathen. But as a Pagan, a polytheist, and a Druid, I’m very “Heathen-adjacent.” I know some Heathens who do not practice magic. Certainly that’s their right. But early in the book, Cat says “the Heathen worldview has always been inherently magical.”

Cat goes on to say:

As a general rule, magic, or the types of magic practiced by a culture, is not separate from the wider overarching worldview of that culture. In other words, when determining the likelihood of how a type of magic may have been practiced, it’s important to make sure that it is congruous with the way that culture saw the world in the first place.

We know some things about ancient Heathen magic. But most of the written records are at a very high level: we know the name of a practice, but we have no details on how it was done. Figuring that out requires historical research. When that isn’t enough, we can use nearby cultures as a proxy. And then we need the most important step – trying it out and seeing if it works.

One of those Heathen practices is “going under the cloak” – covering yourself and going into trance to communicate with various spirits to obtain information and wisdom. The name tells us something about it, but not a lot. Cat describes their research, their cross-cultural comparisons, and their experimentation. They conclude by saying:

If you want a quick summary of Elves, Witches & Gods, it’s this: this is Heathen magic that strives to be authentic, but that insists on being effective. It’s magic that works.

The book is divided into two sections – the first is cosmology.

Cosmologies are not just a way of making sense of a reality that we can barely perceive, but a user interface too. We may as well make sure our interfaces are useful.

It begins with an overview of what we know about Heathen magic. Then it dives into the associated deities. This isn’t as clear and straightforward as many of us like it to be. Most important is the Spinning Goddess (most likely several Spinning Goddesses) and the magic of spinning – this leads to the concept of fate as something that is spun.

Equally important is the God of the Spear: Óðinn. Of Him, Heath says:

A mad, possessed and ever-changing seer is far from the idea of Óðinn-as-king or warband leader. Yet in my experience, it is this Óðinn, the peripatetic seiðmaðr dressed as a woman who trucks with spirits and makes prophecies with clever words, who has the most to teach us about magic.

Magic is something taught to us by the Gods. And They will teach us just as They taught our ancestors, if we will listen. The book discusses offerings, shrines, and other practices that help us form and maintain relationships with the Gods – with these Gods.

Some magic comes from – or through – the elves. But do not expect this to come quickly and easily.

If you seek a magical partnership with one of the álfar, you will discover that the witch-elf relationship is by necessity a close one; the time, effort, and offerings you make now are part of the foundation for it.

Chapter 5 covers foundational ideas: hæl, luck, the soul, and fate. All of this helps build a Heathen context for working magic – a context that is very different from the Christian and materialist context of our mainstream society. 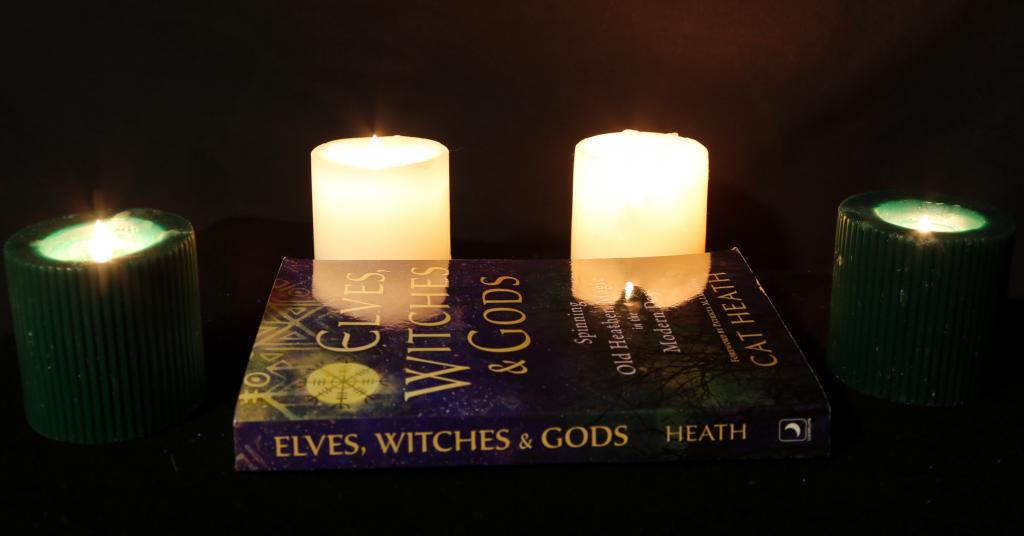 Having built a foundation in Part One, Part Two moves into practice. It begins with basic skills that will be familiar to most of us: meditation, visualization, dream work, and energy work. It covers magical tools and how to make them. While making some tools are beyond the resources of the average practitioner “it’s the tools you birth that will remain the most connected to you and for which you will ultimately be responsible.”

Chapter 8 covers liminality, trance, and working with the dead. This work is not unique to Heathenry, but the book teaches it from a Heathen perspective.

The chapter on fiber magic is one of the few I’ve seen on this topic from any source. Traditionally, spinning and weaving have been considered women’s work, and as such hasn’t been as valued as other forms of magic. But it can be extremely effective. The book includes explanations, exercises, and charms to do your own fiber magic. This isn’t quick and easy to learn – it takes practice to do it well.

The book concludes with a chapter on “Rites, Rituals, and Celebrations” – a quick guide to Heathenry in practice.

Heathens. This book is intended for modern Heathens. If you follow one of the Northern paths, you need to read this book. Even if you don’t practice magic yourself, Elves, Witches & Gods will help you better understand what your ancestors did and the context in which they did it.

Polytheists. The information on Freyja, Holda, Óðinn, and Freyr alone make the book worth reading. Even if you follow a different path, these are deities who are active in our world, and knowing something about Them is a good thing. So is the presentation of a polytheist and magical worldview.

Fair warning: I heard from Óðinn while I was reading this book. Apparently I’m not the only one. My answer is still “no.” But His offers are getting awfully attractive.

Witches and other magicians. This book is full of useful magical techniques and practices. Not all of them can be used outside of a Heathen context, but some can, just as Cat incorporated adjacent and modern practices into their magic. If nothing else, Elves, Witches & Gods will deepen your understanding of magical theory. 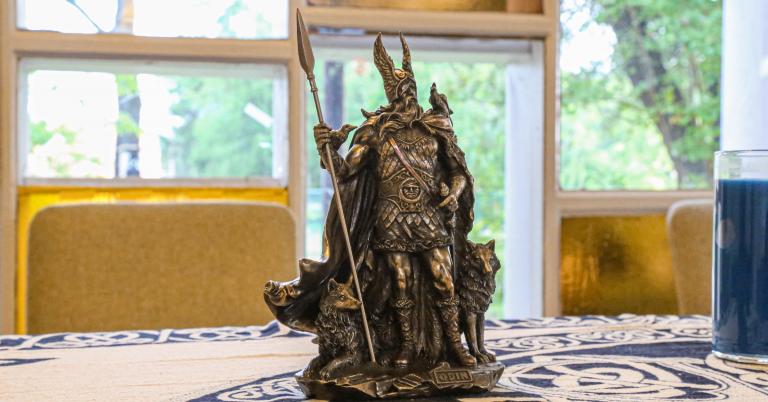 This is not a 101-level book. While a sharp beginner could make their way through it OK, it’s best if you have at least a bit of experience with polytheism and with magic. The workings in it are not safe, in the way that a power saw is not safe. Use it properly and be ready for the unexpected and you’ll be OK. Approach it without proper respect and you stand a good chance of getting hurt.

But if you’re looking for a resource on Heathen magic, or just on magic that works, I highly recommend Elves, Witches & Gods.

The foreword by Patricia Lafayllve, author of A Practical Heathen’s Guide to Asatru, was inadvertently left out of the final printing. It’s available online and it’s well worth the minute or two it will take to read it, particularly if you’re undecided as to whether or not you want to read Elves, Witches & Gods.

For those who care about such things, I bought my copy of Elves, Witches & Gods. Cat Heath is a friend and a magical colleague, but if I couldn’t honestly recommend this book I’d conveniently forget to review it (I’m late with the review, but I never forgot about it). My only obligation in a book review is to you, the reader. And my honest assessment is that Elves, Witches & Gods is excellent.

July 27, 2021 How to Find a Good Reader
Recent Comments
0 | Leave a Comment
Browse Our Archives
Related posts from John Beckett