Why is Contemporary Conservative Lutheranism So Confused About God’s Law?

The paper is about 20 pages and can be found and downloaded for free here.

If you are curious at all about this topic, I hope you will consider checking it out and seriously wrestling with the content of my paper.

Give this a read everyone! https://t.co/nFEl6D4MjD

Here is the summary I wrote of the paper:

In his article “Luther’s Antinomian Disputations and lex aeterna,” Nicholas Hopman tackles Martin Luther’s statement that “only the Decalogue is eternal.” Aiming to counter the views of the Lutheran Orthodox theologians who followed Luther, he states that if a static lex aeterna—“a theological projection of divine, eternal, objective order”—“becomes the framework for the whole theological system, [it] destroy[s] the inherently eschatological nature (Rom. 10:4) of the law-gospel distinction.” This paper aims not to defend every version of the Lutheran orthodox or scholastic version of the lex aeterna as understood and framed by Hopman, but rather attempts to show that the Formula of Concord is justified when it associates God’s law with His eternal will. Operating according to the hypotheses that Luther agrees with this, the paper attempts to demonstrate the same with evidence, firstly, by examining the research of Theodosius Harnack, in addition to Luther’s Genesis lectures, and the Antinomian Disputations themselves. One result of looking at these sources is the realization that Hopman’s own positive view of the lex aeterna is unsatisfactory in that it does not sufficiently reflect on the matter of a law/commandment that can be enjoyed. Much of this incompleteness – perhaps most of it – can be attributed to the fact that he does not give attention to the importance of the design of the original creation in Luther’s understanding. When this is done and a new framework is constructed from the above sources, certain statements and ideas of Luther’s that are problematic in Hopman’s own frame — and hence de-emphasized, explained unsatisfactorily, or even left uncovered in his own work — are more readily understandable and are able to be readily applied to Christian theology and life. 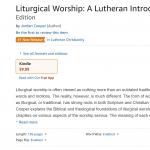 September 21, 2018
My New Book on Liturgical Worship is now available!
Next Post

October 3, 2018 A Defense of Christ's Resurrection
Recent Comments
0 | Leave a Comment
"Hey Jordan,Appreciate this post here brother. In fact I agree with what you say about ..."
Jonty Limited Atonement in Hebrews
"agree with Lee!"
Tom Blair Thoughts on Mercersburg Theology
"Actually you didn't. You dealt with Barth menage a trois but you didn't deal with ..."
Rick Casey Karl Barth is Overrated
"Finally! Someone's finally had the courage to say Barth isn't all that! His early work ..."
Rick Casey Karl Barth is Overrated
Browse Our Archives
Related posts from Just and Sinner