10 Reasons Why ‘The Ten Commandments’ Is Truly Epic 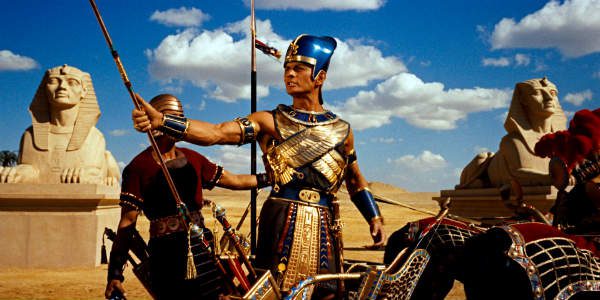 These days, when Hollywood attempts a Biblical epic for the big screen, the results are as likely to be embarrassing as edifying. Rather than rehashing the shortcomings of “Noah” (“Galaxy Quest” called, and they want their rock people back) or “Exodus: Gods and Kings” (nothing like God as a sulky kid), let’s look at one time when the movie stars truly aligned.

A few years before his death, Cecil B. DeMille made the 1956 Old Testament drama “The Ten Commandments” — which had its yearly ABC airing on Easter Sunday — and here are 10 reasons why it’s awesome even today:

1: Men. Both Charlton Heston (Moses) and Yul Brynner (Ramses) may wear skirts for most of the movie — and they’ve got the legs for it — but you’d be hard-pressed to find two more naturally masculine actors squaring off. They’re not overgrown boys trying to look tough, or angsty arrested adolescents, they’re just grown men, and they wear it as easily as they wear a a robe or a crown. Oh, yeah, and there’s John Derek’s stonecutter Joshua. Yes, there is.

2: Women. From Nina Foch’s warm and sympathetic Bithia (Moses’ adopted mother) to Yvonne de Carlo’s quietly beautiful Sephora (Moses’ wife) to Anne Baxter’s delightfully snarky Egyptian princess Nefretiri — and even the single line from the Ethiopian king’s sister, uttered with purring perfection by Esther Brown — the women are the glue that holds it all together.

3: The script. It’s faithful to the Scriptures where it needs to be — and at those moments, it can get a bit stiff and creaky — but in between, the screenwriters have some fun, especially with the Pharaoh Seti (Cedric Hardwicke). As Moses arrives with the tribute from Ethiopia and the high priest intones Moses’ virtues, Hardwicke looks to Baxter and quips, “Old windbag.” He’s got a lot of those.

4: The special effects. From the raising of Seti’s treasure city to the parting of the Red Sea, the pre-CGI marvels are a testament to imagination and skill, with zero computer assistance.

5: Sets and costumes. Again, with no CGI to multiply crowds or create interiors from green-screen nothingness, the gorgeousness of the rooms and the props boggles the mind. Just to look at the bejeweled and embroidered accents on Baxter’s outfits in HD is enough of a treat.

6: Relationships. The tense father-son exchanges between Ramses and Seti; Ramses and Moses’ prickly brother dynamic; Seti’s broken heart at Moses’ betrayal of his Egyptian upbringing; Sephora’s realization of the limitations of her marriage, whether the intrusion is Moses’ lingering love for Nefretri or his newfound passion for God; to Bithia’s enduring mother’s love — this movie gets how people love and hate each other.

7: Memnet. Although she’s a slave and the daughter of a slave, Bithia’s (and Nefretiri’s) servant Memnet has pride in being Egyptian and deeply resents the son of Hebrew slaves being raised up close to the throne of her nation. Whether fueled by jealousy or patriotic pride, I love her slow-burn anger.

8: Dathan. Edward G. Robinson’s obsequious Hebrew overseer — with his “rat’s ears” and “ferret’s nose,” as Ramses puts it — is every political toady and self-hating yes man rolled into one oily package.

9: Respect. The script and production respect the Biblical source material, but they also respect Egypt (even if there are some howling historical inaccuracies). Both sides are taken seriously; both have their heroes and villains; and you feel for both.

10: God. Whether as a voice from the burning bush or the inscriber of the Ten Commandments, God is powerful, enigmatic and, well, godlike — not a Monty Python cartoon character or a cranky child.

Dear Hollywood: Watch this one again, and take notes. 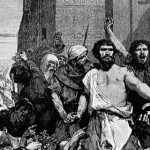 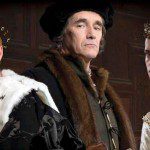 April 6, 2015 Is PBS' 'Wolf Hall' Anti-Catholic? (UPDATED)
Recent Comments
0 | Leave a Comment
"Great review and perspective, Kate. Thanks for reminding me about Miss Luba and other wonderful ..."
Steve Bailey Watching ‘The Jesus Music’ Is Like ..."
"Sounds sort of like a cross between Battle Royale and 13 Tzameti."
Goat Plissken Netflix’s ‘Squid Game’: Violent, Engrossing Korean ..."
"What do you think of Bishops trashing Pope Francis name, and trying to turn religion ..."
oneworlddude Papal Biographer Austen Ivereigh on PBS’ ..."
"What do you think of Pope Francis taking action against celebration of the Latin Mass, ..."
See Noevo Papal Biographer Austen Ivereigh on PBS’ ..."
Browse Our Archives
get the latest updates from
Kate O'Hare's Pax Culturati
and the Patheos
Catholic
Channel
POPULAR AT PATHEOS Catholic
1