As this season of “American Idol” has gone on, I’ve been checking in with Clark Beckham, whom I met in late March at a Fox network party celebrating the Top 12 finalists. We talked about music, but also about the Tennessee native’s deep Christian faith, which we discussed again for a post at the end of the month.

Today — Wednesday, April 29 — we caught some time on the phone just before he went on, taking the chance to dive deeper into his walk with Christ. Beckham opened the episode with Stevie Wonder’s “Living for the City” and …

… make it through the fan voting to the Top 4.

That means he gets to head back to the city of White House for a gala homecoming, complete with a parade, the keys to the city and a concert. If anything were to turn his head, Beckham thinks that might be it — but it probably won’t happen:

They’re supposed to have a lot of people there, so maybe that will be when it sinks in. But it’s surreal. You could go [to the “I’m a big star” place] pretty easily if you wanted, in your mind and ego. You’ve just got to be aware, just because my talent is presented on a stage and on TV, doesn’t make me any better than somebody else’s talent, who might be in a lab, developing medicine, or in a library, researching and writing history novels, or working hard in construction, creating the buildings that we live in.

So that’s what I realized, and what I’ve got to focus on. Just because God gave me the talents that are presented on a stage doesn’t make me better than anyone on the planet. It’s just awareness. I’ve had my foundation on solid rock; I’ve had my foundation on God before this, and if I didn’t, then I probably would be all in, just, “Oh, my gosh, I’m the best thing ever; I’m a star,” if I didn’t have a foundation and an understanding of what purpose is, what life is.

I’ve had voices in my life that have said, “You’re not good enough,” or, “Because of the places you’ve been, and who you were in the past, you’re not good enough, you’re not pure, you’re not clean.” Honestly, the main voice was my own voice, telling myself that. What we’ve got to realize is, it doesn’t matter what people say, it matters what God says about us. Our identity isn’t what culture and humanity says, it’s based on what the Creator of the Universe, the same God that breathed life into our very bodies and put us into existence, it matters what He says with that same breath. That goes on with people who want to be famous, if that’s in His will for you to be what we call famous.

The only status that matters is your status in God, and what He says about you. He says you’re a son or daughter of him, and the old things pass away, and all things are a new creation, redemption — that’s the best story. That’s the best thing anyone can have.

But, says Beckham, it wasn’t always that way for him. Although he was raised in a faith-filled family, he realized at some point that he said he was a Christian because that’s how he was raised, not out of a sense of personal conviction. That brought on a crisis:

That messed me up. I was a closeted atheist for, not long, six or nine months, and then I found God for myself through his Holy Spirit and the Bible and reading and knowing Him for myself, and He’s absolutely changed my life. I didn’t really have that understanding until I was 18, when I was truly saved and understood not only His will for my life, but understood His love, and what the Bible says, His promises, His peace, what He has to offer, His freedom. The sin and stuff that I had gone through, that I thought I could never stop doing, that He could help. Not only could He remove the penalty of those sins, but he could remove the memory and that bondage, and that’s real. It’s freedom.

He says I’m His, and I’m special, and I’m how He wants me to be, and that if I follow Him, He will lead my steps. He’s where my foundation is now, because of that. My foundation before was in girls or status, and it was ever-changing. It was miserable. But now, with my foundation on the only constant that there is, which is God, I truly am on solid rock. The waves can crash up against me; I remain.

Even though he’s left behind his pursuit of purely Earthly pleasures, Beckham says he’s found something better:

I tried it the other way, I tried it my way, being what some would call free, just doing what I want, and it’s miserable. It’s chasing imperfect loves, without a strong foundation. Now that I’ve found His perfect love, that casts away all fear, and it gives me the fruits of the Spirit — love, joy, peace, patience, kindness, goodness, faithfulness, gentleness and self-control — I like those things. Those things are great. Those are things that I didn’t have the other way.

And while it’s about attaining Heaven, for Beckham, it’s not just about that:

We’ve got to realize that the prize of Christianity is not just Heaven. It’s freedom on this Earth; it’s freedom from sin and bondage, and life more abundant here. It’s being joined happily in the marital covenant. A lot of people are wrong in the idea that Heaven is the only thing Christians are for.

Going forward in the “American Idol” competition, Beckham has a simple plan:

It’s just to trust my preparation and my practice, and I have confidence, based on the hard work I’ve done, to just go out and kill it.

April 29, 2015
What Can We Learn From MasterChannel's Brand Strategy?
Next Post 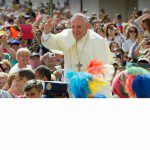 April 30, 2015 Pope Rules Twitter, But Will the Social Network Survive?
Recent Comments
0 | Leave a Comment
Browse Our Archives
get the latest from
Kate O'Hare's Pax Culturati
Sign up for our newsletter
POPULAR AT PATHEOS Catholic
1