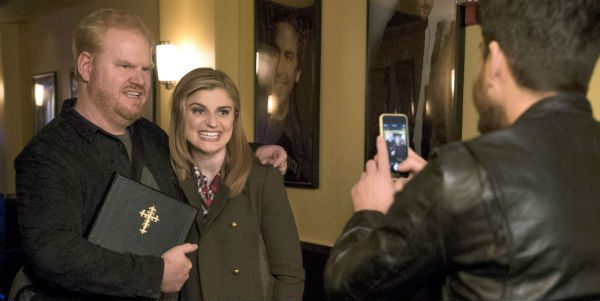 You bastards better watch the new episode of @gaffiganshow tomorrow night at 11 EST on @tvland . It’s not listed just watch at 11. Thx

For the month of May, an episode of the show called “The Bible Story” was posted online. It’s no longer there, but you have opportunities to see a couple more. From the official Website:

Gaffigan had a reason to make “The Bible Story” the first episode people saw. From my other home at CatholicVote:

Our show is just inspired by the life that Jeannie and I lead. This is one episode; this is not the pilot episode. Our show is not just about that [fictional Jim] is paranoid about being outed as a Catholic, as a Christian. One of the the things that Jeannie and I touched on is that I’m a stand-up comedian. I live in New York City, downtown Manhattan, on the bluest island in the country, and 90 percent of my friends are devout atheists.

We started this show because, in my stand-up, I’ve always been fortunate enough to have audiences with mixed views. I love the fact that, in my audience, there’s the Mormon family sitting next to the lesbian couple, and you know what? They don’t care that they’re sitting near each other, because in the end, they’re just going there to laugh.

We made a point that this show is based on our life. Jeannie and I executive-produced it. Jeannie’s amazing. … We live in an environment where we constructed this show where Jeannie is this devout Catholic, the “Shiite Catholic,” but to balance it out or deal with the kind of biases we live in, because that stuff happens today.

Just because she is a devout Catholic doesn’t mean that she’s not open to friends that are leading a different lifestyle. The show has been constructed on a lot of different, conflicting lifestyles — my lifestyle being a father of five, versus Adam Goldberg’s character, who we’ve described as aggressively single. Honestly, Jeannie and I have heard that some people are watching the show and saying they’re Adam.

To which his wife, Jeannie — who shares executive-producing duties with her husband — said:

As Jim calls me a Shiite Catholic, the more Catholic that I become, meaning I learn more about my faith — the more I realize that I’m a bad Catholic, you know? I should be better.

My prayer is mostly like, “Please, God, help me get through this day, because I don’t know what I’m doing.”

“The Bible Story” is one of our middle episodes, and it’s the direct feeling of this thing where both Jeannie and Jim’s points of view are very clear.

Jim is making fun of himself, as in his comic persona, about food and everything like that, about his paranoia about what people are going to think about him. His point of view is, “What’s the big deal?” When Jim is more worried about offending all of these other people, our point of view is that people are not afraid of offending Catholics at all.

So, if you don’t want to insult the Gaffigans, tune in. 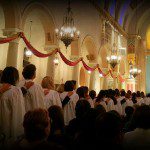 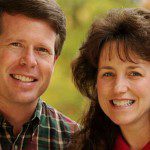 June 4, 2015 Megyn Kelly, the Duggars and the Media Meat Grinder
Recent Comments
0 | Leave a Comment
Browse Our Archives
get the latest updates from
Kate O'Hare's Pax Culturati
and the Patheos
Catholic
Channel
POPULAR AT PATHEOS Catholic
1