Why I Stay in the Catholic Church 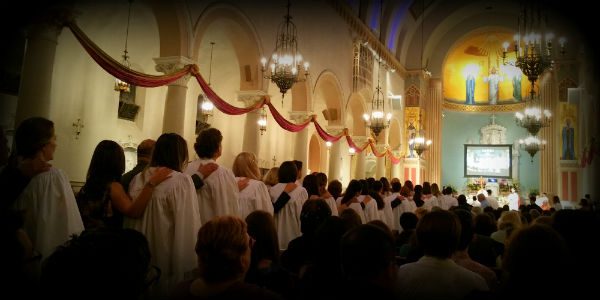 When you find Truth, you should stop searching for it.

I’m a revert who was away for a very long time then took a fairly long time deciding to return. With the help of EWTN, a used copy of the Catechism and a lot of reading, I inched my way back into the Faith.

But, I wasn’t about to commit myself before I’d answered the question posed in a novel I read when I was a teenager. Set in Ancient Egypt, it had a character gaze up at the starry sky, otherwise known as the body of the goddess Nut, and ask the question, “Did you make me, or did I make you?”

Since no one had bothered, in all my years of Catechism school, to ask me if I actually believed any of it, no definitive answer popped to mind.

In the end, I decided that the answer was “yes,” in the sense that Christ was in his Heaven, and the Church He founded was His Body on Earth — peopled, as always, with flawed and cantankerous humans — and that everything she said about Him and herself was true. And after that, where else would I go?

After all, no Catholic Church is truly empty, because as long as the Eucharist is within, the Master of the House is always home.

25 When they found him on the other side, they said to him, ‘Rabbi, when did you come here?’

26 Jesus answered: In all truth I tell you, you are looking for me not because you have seen the signs but because you had all the bread you wanted to eat.

29 Jesus gave them this answer, ‘This is carrying out God’s work: you must believe in the one he has sent.’

30 So they said, ‘What sign will you yourself do, the sight of which will make us believe in you? What work will you do?

31 Our fathers ate manna in the desert; as scripture says: He gave them bread from heaven to eat.’

33 for the bread of God is the bread which comes down from heaven and gives life to the world.

35 Jesus answered them: I am the bread of life. No one who comes to me will ever hunger; no one who believes in me will ever thirst.

36 But, as I have told you, you can see me and still you do not believe.

37 Everyone whom the Father gives me will come to me; I will certainly not reject anyone who comes to me,

38 because I have come from heaven, not to do my own will, but to do the will of him who sent me.

39 Now the will of him who sent me is that I should lose nothing of all that he has given to me, but that I should raise it up on the last day.

40 It is my Father’s will that whoever sees the Son and believes in him should have eternal life, and that I should raise that person up on the last day.

41 Meanwhile the Jews were complaining to each other about him, because he had said, ‘I am the bread that has come down from heaven.’

42 They were saying, ‘Surely this is Jesus son of Joseph, whose father and mother we know. How can he now say, “I have come down from heaven?” ‘

43 Jesus said in reply to them, ‘Stop complaining to each other.

44 ‘No one can come to me unless drawn by the Father who sent me, and I will raise that person up on the last day.

45 It is written in the prophets: They will all be taught by God; everyone who has listened to the Father, and learnt from him, comes to me.

47 In all truth I tell you, everyone who believes has eternal life.

49 Your fathers ate manna in the desert and they are dead;

50 but this is the bread which comes down from heaven, so that a person may eat it and not die.

51 I am the living bread which has come down from heaven. Anyone who eats this bread will live for ever; and the bread that I shall give is my flesh, for the life of the world.’

52 Then the Jews started arguing among themselves, ‘How can this man give us his flesh to eat?’

53 Jesus replied to them: In all truth I tell you, if you do not eat the flesh of the Son of man and drink his blood, you have no life in you.

54 Anyone who does eat my flesh and drink my blood has eternal life, and I shall raise that person up on the last day.

55 For my flesh is real food and my blood is real drink.

56 Whoever eats my flesh and drinks my blood lives in me and I live in that person.

58 This is the bread which has come down from heaven; it is not like the bread our ancestors ate: they are dead, but anyone who eats this bread will live forever.

59 This is what he taught at Capernaum in the synagogue.

60 After hearing it, many of his followers said, ‘This is intolerable language. How could anyone accept it?’

61 Jesus was aware that his followers were complaining about it and said, ‘Does this disturb you?

62 What if you should see the Son of man ascend to where he was before?

63 ‘It is the spirit that gives life, the flesh has nothing to offer. The words I have spoken to you are spirit and they are life.

64 ‘But there are some of you who do not believe.’ For Jesus knew from the outset who did not believe and who was to betray him.

65 He went on, ‘This is why I told you that no one could come to me except by the gift of the Father.’

66 After this, many of his disciples went away and accompanied him no more.

67 Then Jesus said to the Twelve, ‘What about you, do you want to go away too?’

68 Simon Peter answered, ‘Lord, to whom shall we go? You have the message of eternal life,

69 and we believe; we have come to know that you are the Holy One of God.’

I’m only sorry that, as a revert, I didn’t get a ceremony like the one pictured above. I just came back home.

Image: A shot of mine from the Easter Vigil 2015, St. Monica’s, Santa Monica, California 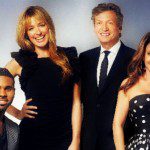 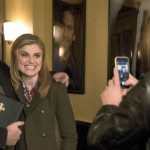 Your Choice: The Eucharist or the...
On the Catholic Beat
Related posts from Kate O'Hare's Pax Culturati

Trump says Kamala Harris is the Meanest, Most...
I am on the mailing list of what seems like everyone in...
view all Catholic blogs
What Are Your Thoughts?leave a comment
Copyright 2008-2020, Patheos. All rights reserved.