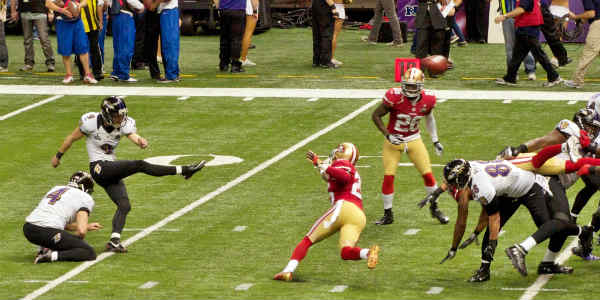 It took watching a repeat airing on NFL Network on Friday morning, but I finally saw the very end of the overtime Thursday game between the Baltimore Ravens (my second-favorite team, after the Seattle Seahawks) and the Pittsburgh Steelers.

Here’s how the U.K. Guardian compared the performance of Ravens kicker Justin Tucker to his less-lucky Steelers counterpart:

The big-legged Baltimore kicker hit a 42-yard field goal to tie the Pittsburgh Steelers in the final seconds of regulation and made a 52-yarder with 5:08 left in overtime to give the Ravens a 23-20 victory Thursday night.

I don’t know much about Texas-born Scobee, but it appears that the Steelers are now in the market for a new kicker, and that’s a sad end for anyone’s career with a team.

But I’ve long been fond of 25-year-old Tucker, one of the NFL’s most public Catholics — and I say that because he does the Sign of the Cross before every kick. On Thursday’s game, the cameras cut away to the opposing coaches just prior to Tucker’s first kick, but the SotC was clearly visible before the winning field goal.

Team photo day, just makin’ sure the wig is tiiight

Speaking to the National Catholic Register in 2013, after the Ravens defeated the San Francisco 49ers in Super Bowl XLVII (Tucker can be seen at top kicking in that game),  the cradle Catholic and former Longhorn spoke about his faith and one of his Ravens teammates:

The team got along very well last season, but how will you manage without the leadership of six-time Pro Bowl selection Matt Birk, also a Catholic,who retired after the Super Bowl victory?

The first two words that come to mind when I think of Matt are “intellectual” and “spiritual.” He’s someone who thinks through things intently and someone who acts through sincere convictions. Matt was a respected leader on the team, and we will definitely miss his presence on the field and in the locker room. We still have many of the same guys on the team this year, which is great. We genuinely enjoy being around each other and working together, which is a tremendous blessing. We put in a lot of hours working hard, but we also have a lot of fun doing it. That ability to make work fun can take you a long way.

Do you pray as a team before games?

The Ravens offer a Mass on Sunday mornings. There are quite a few of us who are Catholic and attend Mass together, which is a pretty cool deal. Then, in the locker room, just before the game, we grab hands as an entire team, and someone always offers a prayer that we play to glorify God and to thank him for the opportunities with which we have been blessed. Just like a family that prays together stays together, our team prays together, and each player knows the man next to him has his back. Our focus is to give all the glory to God, while emerging victorious in the process. Some people think it must be tough maintaining a Christ-centered life in the NFL, or in any pro sport for that matter, but I’ve found it to be quite the opposite. I know, without a doubt, how fortunate I am to do what I do, and I am very grateful for my opportunities. All these blessings make me think of the One who gave them to me.

Not long ago, I spoke to Birk for stories that appeared in both The Tidings, the newspaper of the Archdiocese of Los Angeles, and at Pax Culturati (click here to see more), and here’s what he had to say about Tucker:

I had lockers right next to Justin. Justin’s great. At his age, to be strong in the Faith like that is wonderful. He’s a kicker, so he’s a little different, but not different in a bad way. You just got to understand that kickers are a little different. He embraces his originality and embraces his Catholic faith. When he came onto the team, he was 22, and I think I was 35. I had six kids; he wasn’t married. I always find it really inspiring and energizing when guys like that are plugged into the Faith. It gives me hope.

Sorry, ladies, Tucker took care of that “not married” thing, and here’s the proof.

So, does making the Sign of the Cross help Tucker be accurate in his kicking? Who knows? As I’ve written before, I only think God cares about how someone does in sports to the extent that it helps them to be a better human being. One day, it’s possible that, for the good of Tucker’s soul, God might think he should trade places with Scobee and know the sting of personal defeat.

But as long as Tucker sticks close to Christ and His Church, he’ll always be a winner.

He already sings in seven different languages (and one of them’s Latin).

Speaking of the Sign of the Cross, here’s Tucker discussing just that and some other things … 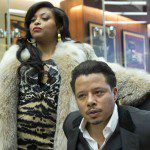 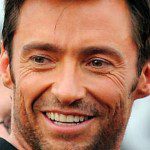