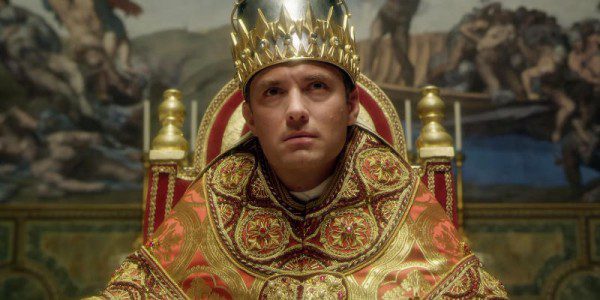 The first trailer is out for HBO’s upcoming eight-episode series “The Young Pope,” starring British actor Jude Law as the first American pope (of course, heaven forbid we have an American actor play the part). Here’s how co-producer Sky (with HBO and Canal Plus) describes the show:

Lenny Belardo, aka Pius XIII, is the first American Pope in history. Young and charming, his election might seem the result of a simple and effective media strategy by the College of Cardinals. But, as we know, appearances can be deceptive. Especially in the place and among the people who have chosen the great mystery of God as the guiding light of their existence. That place is the Vatican and those people are the leaders of the Catholic Church. And the most mysterious and contradictory figure of all turns out to be Pius XIII himself. Shrewd and naïve, old-fashioned and very modern, doubtful and resolute, ironic, pedantic, hurt and ruthless, Pius XIII tries to walk the long path of human loneliness to find a God for mankind. And for himself.

Incidentally, Cromwell played Pope Pius XII in the 2010 film “Under the Roman Sky,” focusing on the pontiff’s efforts to save Jews during World War II (yes, he really did).

In a December 2015 interview with Variety, he said:

“How can you reconcile your personal pain with the fact that religion, Catholic religion in this case, says you have to accept that pain; that it’s part of a grand design? But if this person happens to a pope — the man who is designated to believe, more than anyone else — then you have a pretty big dilemma.”

HBO’s official site for the series says this:

From Paolo Sorrentino, director of the Academy Award®-winning film ‘The Great Beauty,’ ‘The Young Pope’ tells the controversial story of the beginning of Pius XIII’s pontificate. Born Lenny Belardo, he is a complex and conflicted character, so conservative in his choices as to border on obscurantism, yet full of compassion towards the weak and poor. The first American pope, Pius XIII is a man of great power who is stubbornly resistant to the Vatican courtiers, unconcerned with the implications to his authority.

Sorrentino, who also directed of the upcoming ‘Youth,’ says the series is about “the clear signs of God’s existence. The clear signs of God’s absence. How faith can be searched for and lost. The greatness of holiness, so great as to be unbearable when you are fighting temptations and when all you can do is to yield to them. The inner struggle between the huge responsibility of the Head of the Catholic Church and the miseries of the simple man that fate (or the Holy Spirit) chose as Pontiff. Finally, how to handle and manipulate power in a state whose dogma and moral imperative is the renunciation of power and selfless love towards one’s neighbor.”

Shot mostly in Rome — near, but not inside, the Vatican — and other Italian locations, the film airs in October on Sky Atlantic Channel, which can be seen in Italy, the United Kingdom, Germany, Ireland and Austria. HBO has yet to announce its premiere date.

Based on the trailer — and that’s sometimes not much to go on — “The Young Pope” looks fanciful, overwrought and melodramatic, positing a pontiff whose taste for crowns and robes rivals the sartorial splendor of Cardinal Burke. 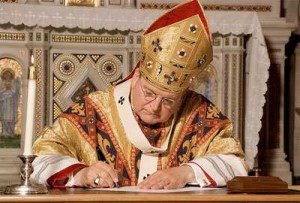 Conversely, Law is also seen praying at the bottom of a pool wearing only white shorts, and dropping his bathrobe before a mirror (not to mention going to his knees in front of a bunch of tractor trailer trucks — let me guess, hauling out all the Vatican treasures to sell for the poor? Wouldn’t surprise me a bit.).

Or, as the voice of Law in the trailer says:

“I’m a contradiction. I’m God. One in three, and three in one. Like Mary, virgin and mother; like man, good and evil.”

Asked what he wants, the cigarette-puffing pontiff replies, “Revolution.”

In all likelihood, “The Young Pope” has about as much to do with the lives of real popes and ordinary Catholics as “The Bachelor” has  to do with true love, or “The Da Vinci Code” has to do with real Church history, or any other sort of history. 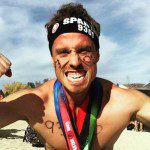 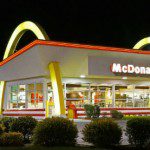 June 19, 2016 McDonald's, Marketing and Mass Appeal -- The Church and the Media
Recent Comments
0 | Leave a Comment
Browse Our Archives
get the latest from
Kate O'Hare's Pax Culturati
Sign up for our newsletter
POPULAR AT PATHEOS Catholic
1

Christians Must Realize That The Pandemic...
A Little Bit of Nothing
Related posts from Kate O'Hare's Pax Culturati