‘The Young Pope’ Creator Returns to HBO With ‘The New Pope’

Pope Pius XIII, the character at the center of HBO’s surprisingly good “The Young Pope” this past season, apparently won’t be the center of a season two. Instead, Italian writer/creator Paolo Sorrentino is bringing us “The New Pope,” set to go into production in Italy in late 2018.

Sorrentino is teaming with frequent collaborator Umberto Contarello, who was also a co-writer on “The Young Pope,” which chronicled the papal career of Cardinal Lenny Belardo (Jude Law), a charismatic but conflicted fortysomething American who took the Vatican by storm with his orthodox beliefs and unorthodox style.

As for “The New Pope” — a joint production of HBO and European satellite broadcaster Sky — we have no clues yet, but casting is set to start soon.

The show will be “set in the world of the modern papacy,” but HBO and Sky declined to release further details of the story.

“Just like ‘The Young Pope,’ Sorrentino is writing the script for the new show, but it will have a different twist than what would be expected,” Sky Italia chief of content Andrea Scrosati told Variety.

At the end of “The Young Pope” — SPOILER WARNING!!!! — it appeared as if Pope Pius XIII had keeled over, perhaps from a heart attack, and was having a vision of the Virgin Mary in the clouds. We don’t know for sure, though, whether he survived.

Sources say that a reappearance by Law in “The New Pope,” albeit in a much smaller role, has not been ruled out.

Of course, there were all kinds of fantasy sequences in “The Young Pope,” so ghostly visitations, visions or flashbacks are very possible.

As I’ve written before, I was deeply skeptical of “The Young Pope,” but after five episodes, I was intrigued. By the end, I was an unabashed fan.

In one piece, written near the end of the show but before the finale, I said:

“The Young Pope” is not so much a series about the papacy or the Church, but about the experience of being Catholic, about the way that the Church’s teachings and culture wrap around and permeate one’s life. Catholicism is not just the one true Faith, it’s a true world faith. It’s the underpinning of Western culture, but it doesn’t stop there. From Japan to Hawaii to Sweden to Uganda to Korea to Rome, the Church is everywhere and for everyone.

When tragedy strikes, the eyes of the world often turn to the Vatican, like travelers marking the North Star or the Southern Cross to get their bearings.

And it may take someone standing outside the Catholic mainstream to talk about some of the things that affect us most deeply.

Law was magnificent, and I hope he wins some awards. He took a difficult role and inhabited it thoroughly, and perhaps won a few people over to the idea of returning some of the sartorial splendor to the papacy. 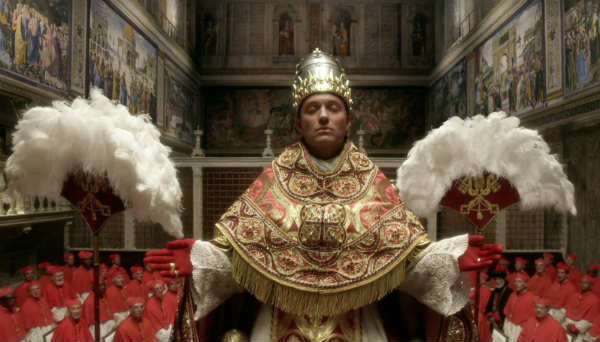 A lot of that has to do with how Law carried himself, and the gravity he brought to a role that could easily have slid over into camp.

From a recent interview with him in Variety:

I certainly did [feel different in the papal costumes], and I’m not particularly religious. I have a great curious fascination with faith in my life but, you know, I had great respect for it, but I wasn’t going to goof around. Do you know what I mean? Doing silly selfies. I felt like there was a certain reverence one has to give to it when you wore it.

And also Paolo was really adamant that it should be pristine and so I had to be really careful where I sat and what I was eating and all of that stuff. Every single day it became a bit of a bore, actually. But equally, all that is contrary to the part. I always felt like I was playing a man playing a character. I was playing Lenny playing the Pope. It’s no chance in the first episode you see him naked in front of the white outfit. It’s like he takes his skin off and steps into the role of Pope Pius.

We can only hope that “The New Pope” is as engaging and entertaining as “The Young Pope,” but anything can happen in the modern media world. Since things like this are the only exposure some folks have to the Church, a few prayers might be in order. 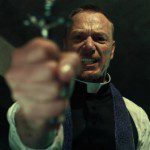 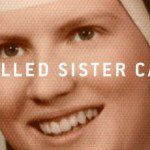