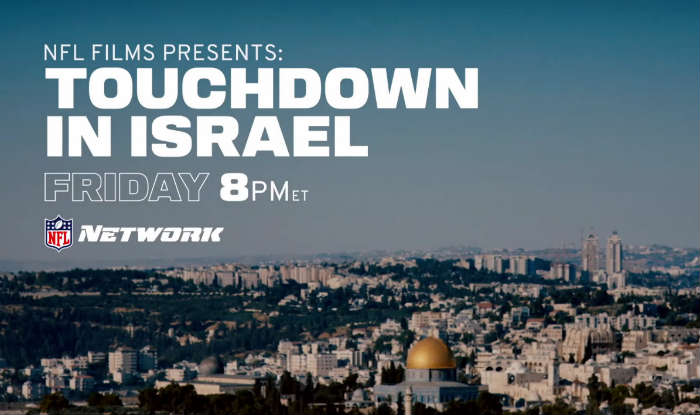 Robert Kraft, chairman and CEO of the New England Patriots, is taking 18 NFL greats to Israel — but the game was there long before them.

Thanks to the efforts of Kraft, Israel is coming to love American football, which is one sport that is — despite its share of human frailty and fallen nature —  also home to many devoutly religious players, who speak often in public of their devotion to faith.

On Friday, Oct. 20, at 8 p.m. ET, NFL Network repeats “Touchdown in Israel” (first aired Sept. 19), produced by NFL Films and featuring host Katie Nolan. The one-hour documentary follows Kraft, an observant Jew, and 18 Pro Football Hall of Famers as they head to the Holy Land for a spiritual and athletic experience.

[They visit] historical and biblical landmarks including the Mount of Beatitudes, Jordan River, Masada, the Church of the Holy Sepulchre, Western Wall, City of David and the Dead Sea. Together, the football legends absorb the Holy Land’s offerings and form powerful bonds with one another.

Included in Touchdown in Israel are reflections from Hall of Fame cornerback and founding pastor of Spirit Church in St. Louis Aeneas Williams discussing how God helped Williams through his football career, and Hall of Fame wide receiver Cris Carter sharing his story on Christ saving his football career and helping him overcome drug abuse, as well as baptisms in the sacred Jordan River for many of the Hall of Famers.

Also from NFL Films, some quotes from the special:

– “You see us with the equipment on. You see us with the helmets on. But at the end of the day, we’re just human beings that are in need of Christ…Learning to worship God helped me learn to overcome fear. So many people never reach their destinies, never reach their potential because they never learn that they are created in God’s image. As they learn to worship the One that created them, the fear begins to dissipate because God becomes bigger then whatever that fear is.” – Aeneas Williams

– “I continue to thank God for allowing my family and me, Jonathan, Daniel and Joshua to help continue to build Jerusalem the Holy City all together, as one nation, one city, and with a prayer for peace, the nation of Israel lives.” – Robert Kraft

– “I came here as just a member of the Hall, but man I am leaving with some special relationships.” – Marshall Faulk

– “Bringing the game to the rest of the world…There’s nothing better. What you’re doing with bringing American football here, it is something that brings people together.” – Joe Montana

This isn’t the first time a film has tackled this subject.

In 2015, I did a story here on “TouchDown Israel,” a film by American writer/director Paul Hirschberger, which looked at AFI (American Football in Israel) and IFL (Israel Football League), which promote the sport in Israel.

Players are secular and religious; Israeli-born and not; Arab, Jew or other; Muslim, Jewish and Christian. “TouchDown Israel” follows the IFL’s season-five quest for the Israel Bowl, as veterans and rookies (not just to the IFL, but sometimes to football itself) work on game strategy and get to know each other as people.

All this is happening in large part due to the efforts of Robert Kraft, owner of the Super Bowl Champion New England Patriots, who’s interviewed in the film. A noted philanthropist, Kraft is longtime supporter — with the intense, hands-on involvement of his late wife, Myra — of various Jewish causes in American and in Israel.

For me, that was the takeaway, that people are willing to sacrifice themselves, in a way, for the good of their community. You have to trust — which is very difficult for many people and especially for Israelis. They are always looking over their shoulders, because many of them have done that for years, not just Jews but Arabs. So, for you to be able to listen is very important.

Here’s a peek at “Touchdown in Israel”: 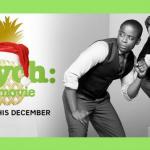 October 16, 2017
Is the 'Psych' Christmas Movie the Pineapple Reboot You've Been Looking For?
Next Post 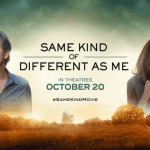 October 19, 2017 'Same Kind of Different As Me': A Fallen Husband, a Forgiving Wife and the Homeless Man Who Inspired Them
Recent Comments
0 | Leave a Comment
Browse Our Archives
Follow Us!

Lenten weight-loss update (and related thoughts)
It's 8:30, the day after Ash Wednesday. And I'm pleased to report...
view all Catholic blogs
What Are Your Thoughts?leave a comment
Copyright 2008-2020, Patheos. All rights reserved.