Hanging by your fingertips thousands of feet in the air, with only your skill, muscles and sinews between you and certain death. That’s the world of rock climber Alex Honnold and Free Solo.

There’s little mystery why the film’s such a winner. It not only takes a dive inward into Honnold’s past, personality, psychology and brain activity — along with tracing his romance with girlfriend Sanni McCandless, who shares the van he lives in —  but it zooms outward, with daring and stunning photography.

You may think some of the final climb footage was done with drones. But it was actually a helicopter-based camera operator with a 1500mm lens, capturing Honnold clinging like a spider to the bare rock wall of Yosemite National Park’s soaring El Capitan, with nothing but air around him, and unforgiving, hard ground beneath.

Honnold is a fascinating character. By his own account, he’s from a broken family where little love was expressed. Describing himself as a “dark soul” and “melancholic,” his shyness led him to climbing by himself — which he’s turned into kind of an art form.

Here’s a 360-degree video from NatGeo:

Of couse, it’s an art form done on the edge of doom. At the recent TV Critics Association Press Tour, I got to ask Honnold about his attitude toward his own mortality. Here’s what he had to say:

I’ve thought about it a fair amount. I mean certainly the whole process for free soloing El Cap, I thought through all the consequences and I imagined what it would be like to fall off in different places and what would happen. I don’t know. I mean I think in a lot of ways that’s a healthy relationship with mortality because it’s just an acceptance that we’re all going to die. We’re all going to die at some point. And you know, I would like to die on my own terms, you know, doing the things that I care about in the way that I care about them.

And don’t look at free soloing El Cap as me just rolling the dice and, you know, if I die, I die. I mean, the reason that the film exists, you know, the reason that it’s two years of practice and preparation is because I wanted to make sure that I would not fall and die. That said, you know, I was willing to take certain risks, you know, because it meant enough to me. I don’t know, I mean it’s complicated but I think I’ve thought about it a fair amount.

I accept that some things happen, but I don’t understand them. They leave me with more questions than answers. Extreme climbing is one of them. Other than a sense of personal accomplishment, what’s it for? What does it do? Nothing I can see beyond the personal, but watching Free Solo reminded me that almost any activity can be turned for good. As Honnold’s climbing took him around the world, he saw how people struggled in other countries. So, he founded the Honnold Foundation, which promotes solar energy and solar entrepreneurship, especially in developing areas.

At present, alternative energies like solar and wind aren’t reliable or scalable enough to answer our major power needs, but they can work great on individual buildings and in outlying areas beyond the reach of traditional grids (just look at the little solar panels powering road signs). Honnold’s efforts are the best use of passion and fame — harnessing those to create good outside of oneself.

In the film, Honnold said that he’s trying to “balance the cosmic scales,” to help lift people out of poverty and help the Earth. Who can argue with that?

Amazing even to himself because he was so shy and introverted, Honnold now speaks to students. At TV Critics press tour, I was curious what he’s inspiring them to do, whether it’s more than just pursuing a personal passion. Here’s his answer:

Yeah, I think that if I had to choose something for them to take away from it, would be to make intentional choices and live intentionally I guess, to make clear choices in their life. You know, to decide what they want to do, how they want to spend their time, what’s of value to them. I mean I think that’s, you know, I mean I think that’s kind of at the heart of the film, you know, that choosing the way you want to live your life.

Not bad advice. Christianity tells us that we should also not live just for ourselves, but for others and for the greater glory of God. That last one isn’t Honnold’s motivation, though. Faith isn’t mentioned in Free Solo, but Rolling Stone did ask him about it. Here’s the answer:

The notion of God is absent from Free Solo. With a movie like this, the audience might expect a scene where everyone is praying for your safety. But you’re not into that?
No, I’m very anti-religion. I think it’s all just medieval superstition. Religion relies on some desire for a spiritual connection and I do get that from just being out in Yosemite. I get that feeling of grandeur and awe in the world sitting on a cliff at sunset, watching the mountains glow pink, that a lot of people get through religious faith.

Do you think that your being an atheist is linked to your attitude about death?
I’ve certainly thought about my mortality more than most. I think some people turn to faith as a crutch, to avoid thinking about mortality — you know, “Well, I’ll carry on forever in some eternal kingdom.” But the harder thing is to stare into the abyss and understand that when it’s over, it’s over.

Is it? Or is it harder to stare into the abyss and realize that what you do, or don’t do, in this life reverberates into eternity? That’s a deeply personal question, with only a personal answer. Maybe if you believe — or you believe that all believers believe — that Hell is empty and that, regardless of our choices and actions, we all wind up in Paradise, it does seem easier.

But if you believe in a God who’s not just merciful but just, it’s a much sticker proposition.

There’s also the old question, can you do good without God? Of course, you can. Can you profess God and still do evil? Absolutely — as we have daily proof. So, what’s the point of belief? Catholic Answers goes into this in depth here, but, in brief:

So even if belief in God were just a moral crutch, it would be a handy and effective crutch. But most theists think it’s more than a crutch. We believe that God not only sets out the moral law and tells us to obey, but gives us the power to obey it—what we call actual grace. We’re able to transcend merely natural virtue, go beyond all that we have to give by our own power, because God gives us his power.

That power perfects our natural virtue, making us better people than we could otherwise have hoped to be. Better still, it enkindles in us supernatural virtue, moving us from being good people to a moral state nonbelievers cannot attain: holiness.

Alex Honnold may not believe in God, but we know God believes in him — and smiles when he does good in the world. And who’s to say what’s really at work in someone’s heart when they draw a spiritual sense from the glory of nature? You can appreciate the beauty of a work of art without knowing the artist (but that doesn’t mean there wasn’t one).

As I see Honnold suspended in the crystal air of Yosemite, I’m reminded of the beautiful poem, High Flight, by World War II pilot John Gillespie (quoted by President Reagan after the Challenger disaster):

“Oh, I have slipped the surly bonds of earth,
And danced the skies on laughter-silvered wings;
Sunward I’ve climbed and joined the tumbling mirth of sun-split clouds –
and done a hundred things You have not dreamed of –
wheeled and soared and swung high in the sunlit silence.
Hovering there I’ve chased the shouting wind along
and flung my eager craft through footless halls of air.

“Up, up the long delirious burning blue
I’ve topped the wind-swept heights with easy grace,
where never lark, or even eagle, flew;
and, while with silent, lifting mind I’ve trod
the high untrespassed sanctity of space,
put out my hand and touched the face of God.”

Along with its commercial-free premiere tonight on National Geographic Channel, Free Solo is still available in theaters, and streaming for a fee on Amazon Prime, YouTube, Google Play and Vudu.

Oh, and the guy in the unicorn suit? Here you go. 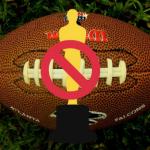 February 24, 2019
5 Reasons Why the 'NFL Honors' Ceremony Beats the Oscars
Next Post 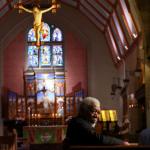 March 4, 2019 'The Story of God' Returns With the Devil -- and Got a Scare at the Vatican
Recent Comments
0 | Leave a Comment
Browse Our Archives
Follow Us!