While you’re waiting on the next Downton Abbey movie or musing on how PBS’ Sanditon was largely Austen in name only, EPIX brightens Easter night with Belgravia, the latest costumed British saga from Downton creator Julian Fellowes.

He originally wrote Belgravia as a serialized digital novel. The six-episode EPIX production of it premieres Sunday, April 12, and runs into May. The story centers on two women — not fresh-faced husband-hunters or ambitious young aristocrats, but two women of mature years: Anne Trenchard (Tamsin Greig), wife of an up-and-coming businessman (Philip Glenister), who lost her only daughter; and Lady Caroline Brockenhurst (Harriet Walter), whose only son with her titled husband (Tom Wilkinson) was a casualty of war.

The story begins when the Trenchards are invited to a real-life event, a ball given by the Duchess of Richmond in Brussels, Belgium, on the eve of the Duke of Wellington’s (Nicholas Rowe) climactic battle against Napoleon at Waterloo in 1815. Young Sophia Trenchard (Emily Reid) defies her parents by romancing Lord Edmund Bellasis (Jeremy Neumark-Jones), the dashing Brockenhurst heir.

Their assignation leads to a secret that bubbles back to the surface 26 years later, in the 1840s, when Anne and Lady Brockenhurst cross paths in the swanky, recently developed and built Central London neighborhood of Belgravia (which remains swanky to this day).

Tightly corseted and bound by elaborate rules of courtesy, the steely but grounded Anne and the imperious but deeply wounded Lady Brockenhurst find themselves on opposite sides of a war, which, in some ways, is as consequential for them as Waterloo was for Wellington.

Fellowes (a Catholic, by the way) adapted his own novel for the screen; and Belgravia is a co-production of EPIX and Carnival Films (the company behind Downton Abbey). It was also commissioned for Britain’s ITV, which aired it in March. Fellowes is among the executive producers, as is Carnival’s Gareth Neame.

This past January, I sat down with both men during the biannual TV Critics Association Press Tour in Pasadena, California, and here’s some of what they shared.

Fellowes on the character of Anne, who’s more genteel than her social-climbing husband:

What Anne has, which I think Tamsin gets fantastically well, it’s that feeling that because her daughter is dead, nothing else matters much. And so everyone breaking their backs to get into this group, or that group, or this ballroom, or that ballroom, she doesn’t have any of that. She goes along with it for the sake of her husband, whom she is fond of. But she doesn’t share his values, she is her own woman.

And of course that’s why in the end Lady Brockenhurst, who at the beginning is determined to patronize her, but comes reluctantly to the conclusion that she is not able to. And that gives Anne strength. And I think both those, Harriet and Tamsin do that fantastically well.

Fellowes on why he’s fascinated with period pieces centering on women:

Nowadays, if a young woman wants to leave her parents’ home, and go up to London, and get a job, and live in a flat with some friends, she gets on a train. I mean there’s nothing to stop her.

Whereas if a Victorian woman managed to create an interesting life, [she risked her reputation], all the time, like an egg in an egg-and-spoon race.

And yet there were women who were very strong and did get a lot done. And they interest me. They weren’t thrown out of society; they weren’t abandoned or anything. They stayed in society, and they got it done. And I suppose that is a generic type when I’m writing period drama that I do find very interesting, really.

While Downton and Jane Austen’s writing deal mostly with gentlemen and ladies — if they don’t always have money, they do have gentility — Belgravia‘s Trenchard is truly a self-made man. Starting as the supplier for Wellington’s troops, he’s achieved financial success and now finds himself rubbing elbows with his aristocratic neighbors.

Here’s Neame on what he likes about Trenchard:

He started from nothing. Although he’s gauche. and he comes across as a bit foolish at times, there’s no doubt about it, he’s a highly intelligent, clever, ambitious, new man. I rather admire Trenchard in lots of ways for achieving what he’s achieved, compared to, say, the Brockenhursts, where obviously it’s just in that very English way the family that’s had these estates and wealth for generations, and Trenchard has done it in his own lifetime.

He really is ambitious, but [his wife is] actually much better suited to it: she knows how to operate, and he really doesn’t have much of a clue. But we are living in an age of advancement in the 1840s, and this was the first time, really, because of the Industrial Revolution, that a man could make a fortune and take his whole family into a new class.

And, of course, there are those spectacular dresses — layers of skirts and petticoats, muslin and silk. Thus begowned, even the smallest woman suddenly takes up considerable space and makes a visual impact when she enters a room.

Some old man, I can’t remember who he was now, but anyway, someone asked, “What do you miss most from the world of your youth?” And he said, “The noise of women’s dresses.” The rustling of the silk and all of that, which it’s gone now. And I think that is quite moving as well.

You can watch Belgravia (official site here) on the EPIX premium cable channel, starting Sunday at 8 p.m. ET/PT, or the EPIX NOW app. Cable provider Spectrum is offering free access to EPIX (and Showtime) through April 19 … just enough time to get you hooked on Belgravia.

April 9, 2020
Sing to the Lord: 'The Clark Sisters: First Ladies of Gospel' Comes to Lifetime on Holy Saturday
Next Post 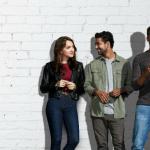 April 14, 2020 CBS Cancels 'God Friended Me,' Producer Promises a 'Fitting and Satisfying' End
Recent Comments
0 | Leave a Comment
"Simply being subject to scrutiny for many Christian sects is "unfair". They're ignoring that THEY ..."
Michel Hulu’s ‘Under the Banner of Heaven’ ..."
"I think some people’s opinion about this movie will reflect their opinions of Mark Wahlberg ..."
Chris ‘Father Stu’: What Makes a Catholic ..."
"I too was not enamored of Bertha's ball gown, it wasn't particularly flattering, and that ..."
KMC HBO’s ‘The Gilded Age’: Oh, the ..."
"chaturbate Chaturbatechatrubatr Chatrubatrchaturbatew chaturbatewchatrubatw chatrubatwchatubate chatubate"
chaturbate ‘The Chosen’s’ Angel Studios Attracts Investment ..."
Browse Our Archives
Related posts from Kate O'Hare's Pax Culturati