In this post, I welcome guest blogger Father Vince Kuna, C.S.C., a priest of the Congregation of Holy Cross, a 2016 USC film-school graduate, and a lover of all things comic-books and cinema. Here, I’ve asked him to watch some TV instead — but it helped that it’s TV based on a movie that’s based on a graphic novel.

All aboard Snowpiercer, premiering Sunday, May 17, at 9 p.m. ET/PT on TNT:

Snowpiercer (official site here), A TNT series based on the 2013 Bong Joon Ho film (Rated-R) of the same title, which was originally based on the 1982 French graphic novel Le Transperceneige by Jacques Lob. As of yet, no rating on the TV show. Scenes of violence and sexuality.

From the tail car, a level below even third class, Curtis (Chris Evans) leads a revolt. A violent Dantesque journey proceeds: from the hellish tail car to the purifying middle cars (showers, pools, saunas) and ending in the supposedly “heavenly” luxury cars.

Except, at the end, this subtext becomes the falsifying text. The “Sacred Engine” preached throughout the film is revealed as a merely crude, cramped engine room operated by ignorant children. Ho delivers a not-so-original, but nevertheless biting, critique of religion … it keeps people in a literal darkness, so better to blow the door off the comforts of the train (and with it the social order, and technical and economic progress, that the filmmaker probably deep down knows religion offers) and live in the radical freedom of a thawing Mother Nature.

It’s not a Marxist message I agree with, but similar to what he did with Parasite, the director executes it well.

The Snowpiercer TV series (Ho listed as one of the executive producers), unlike the movie, pays homage to the graphic novel in an animated opening scene of exposition. More importantly, the show later fills in the logic gaps of the movie.

Showrunner Graeme Manson displays a better command of economics. Ho’s possible socialist leanings only function in the literal vacuum of the movie version of the train. In the TV version, the constraints of the train force the inhabitants into economic reset, and a more mutually beneficial arrangement of feudalism settles in.

How can the potential gifts of the lower-class benefit everyone else on board? They find an immediate subject. A murder occurs in first class. No one among the paying customers nor crew claims experience in forensics. Andre Layton (Hamilton Tony- and Grammy-winner Daveed Diggs), a police detective in the life before the big freeze, volunteers for the task. He also mediates between the various classes after two violent revolts — sequences depicted as horrific and rightly so.

In the same scene from the movie version, the filmmakers can’t resist glorifying the bloodshed, necessary, I suppose, if one also paints their political philosophy in red. (Pun intended.)

From there the two approaches diverge, marked notably by their disparate considerations of faith, both implicitly and explicitly.

Ho and his film, a largely godless story, is already long forgotten. The TV show led off by Diggs’ soulful traditional hymn leaves the viewer desiring the next movement of this satisfying train opera. 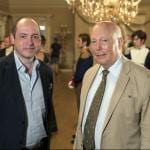 May 13, 2020
'Belgravia'/'Downton Abbey' Creator Julian Fellowes Will 'Think About' a Story on English Catholicism
Next Post

May 26, 2020 'Grant': A Necessary Corrective to a Civil War History Not Written by the Winners
Recent Comments
0 | Leave a Comment
"What do you think of Bishops trashing Pope Francis name, and trying to turn religion ..."
oneworlddude Papal Biographer Austen Ivereigh on PBS’ ..."
"What do you think of Pope Francis taking action against celebration of the Latin Mass, ..."
See Noevo Papal Biographer Austen Ivereigh on PBS’ ..."
"A sequel to the Passions of Christ .... lord love a duck"
ILR ‘Father Stu’: Two Who Knew Real ..."
"I wonder if the movie will end up like Metin Scorsese’s “Silence” - too grim ..."
Chris ‘Father Stu’: Two Who Knew Real ..."
Browse Our Archives
get the latest from
Kate O'Hare's Pax Culturati
Sign up for our newsletter
POPULAR AT PATHEOS Catholic
1