How Shall a Catholic Vote?

How Shall a Catholic Vote? August 16, 2012 Kathryn Jean Lopez

Paul Ryan’s bishop, Robert C. Morlino, writes that he is “proud” of Paul Ryan, who “is aware of Catholic Social Teaching and is very careful to fashion and form his conclusions in accord with [its] principles.”

He quickly adds, however:

It is the role of bishops and priests to teach principles of our faith, such that those who seek elected offices, if they are Catholics, are to form their consciences according to these principles about particular policy issues.

And so he goes on to teach about voting principles:

the formation of conscience regarding particular policy issues is different depending on how fundamental to the ecology of human nature or the Catholic faith a particular issue is. Some of the most fundamental issues for the formation of a Catholic conscience are as follows: sacredness of human life from conception to natural death, marriage, religious freedom and freedom of conscience, and a right to private property.

Violations of the above involve intrinsic evil — that is, an evil which cannot be justified by any circumstances whatsoever. These evils are examples of direct pollution of the ecology of human nature and can be discerned as such by human reason alone. Thus, all people of good will who wish to follow human reason should deplore any and all violations in the above areas, without exception. The violations would be: abortion, euthanasia and physician-assisted suicide, same-sex marriage, government-coerced secularism, and socialism.

He echoes Archbishop Lori who spoke of intrinsic evil and voting last week.

Read the bishop of Madison’s full letter here. This is not the first time he has publicly acknowledged that Paul Ryan takes Catholic Social Teaching seriously.

August 15, 2012
Bill Buckley on Keeping the Faith
Next Post

August 17, 2012 Cardinal Dolan on Paul Ryan & Thomas Aquinas and other Friends
Recent Comments
0 | Leave a Comment
Browse Our Archives
get the latest from
Catholic
Sign up for our newsletter
POPULAR AT PATHEOS Catholic
1

Another Word on the Tragedy of...
Steel Magnificat
Related posts from Kathryn Lopez 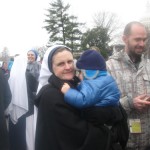 Catholic
What about a Real, Joyful Commitment to Authenticity?
Kathryn Lopez